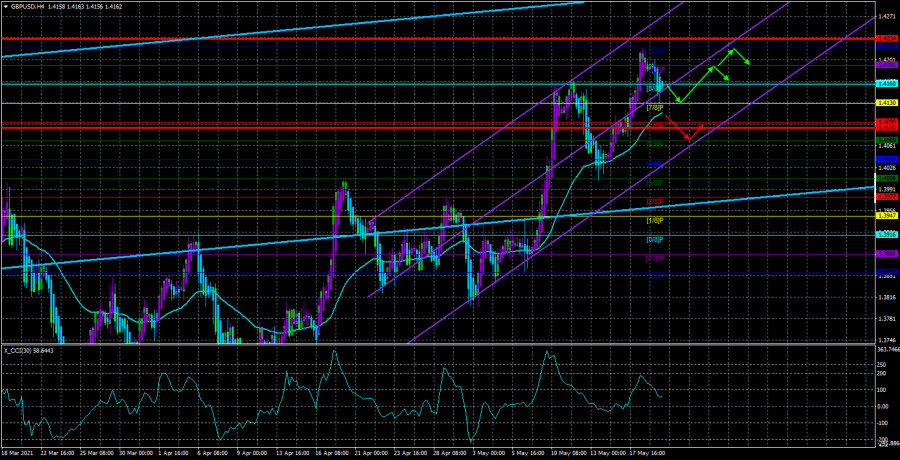 The British pound sterling on Wednesday, May 19, also slightly corrected in an uptrend that has been going on for more than a month. And this is only if we talk about a local uptrend. The global one began 14-15 months ago, and during this time the British currency has risen in price by 28 cents against the American one. However, as we have already said many times, the fundamental background that should have contributed to the fall of the pound sterling does not matter for traders and markets now. The pound sterling continues to rise for the same reasons as the European currency. In the United States, the money supply is inflating, thanks to the constant injections of money from the Fed and Congress, which leads to the depreciation of the dollar in the foreign exchange market. In addition, inflation in the US promises to be much higher than in the UK or the European Union. For comparison, the latest inflation reports say that in the European Union it accelerated to 1.6% y / y, and in the UK – to 1.5% y / y. In the US, inflation is already 4.2% and, according to most experts, will continue to grow. The Fed is inactive and does not even hint at a possible tightening of monetary policy or curtailment of the quantitative stimulus program. Which means only one thing: dollars will continue to become more and more. And the American currency will continue to depreciate. And the fundamental background, which would have sent the British pound to the $ 1.30 mark long ago, does not matter now. Remember how the British currency fell in price until 2020, during the “Brexit period”! What has changed now? Has the UK economy got off its knees? Not. It still lags behind in development from the American one. Are Britain’s geopolitical problems resolved? Not. On the contrary, with the implementation of Brexit, there are more of them, since now Scotland is determined to leave the Kingdom and similar separatist sentiments are now brewing in Northern Ireland. The only really positive moment for Britain can be considered the gradual lifting of quarantine restrictions and the high rate of vaccination of the population. There is no more positive news.

Meanwhile, another speech by the Governor of the Bank of England, Andrew Bailey, took place, this time in the Parliament of Great Britain, during which the head finally began to talk about economics and monetary policy. His previous few speeches did not address these issues at all. According to Bailey, the Bank of England will not allow inflation to go far above the 2% level. Many experts immediately interpreted these words as a hint of a possible rate hike, but in reality Bailey only wanted to say that inflation is unlikely to accelerate at the same rate as in the United States. The latest inflation report did show an acceleration, but only up to 1.5%. That is, even with this increase, inflation in Foggy Albion remains below the target level. Representatives of the Bank of England’s monetary committee believe that inflation has been hit hard over the past year due to falling energy prices, which has negatively affected prices in all areas of the economy. Recently, oil prices have increased, and Andrew Bailey associates the rise in prices not with fiscal and monetary stimulus, but with the rise in oil prices. Bank of England economists believe that inflation will continue to accelerate and by the end of the year will be about 2.5%, after which a period of slowdown will begin and the indicator will return to the target of 2%. Also, Andrew Bailey said that the economy has already received an impetus for recovery, and the high rates of vaccination allow us to count on the fact that next year the budgetary stimulus can be phased out. Also, the Bank of England said that the latest surge in price growth is associated more with a shortage of supply of some goods in certain industries, as well as the desire of companies to return to the fight for the market as soon as possible amid the lifting of coronavirus restrictions. According to Bailey, there is now a kind of mismatch between real demand and real supply, an imbalance that was caused by the year of the pandemic and the crisis. Manufacturers simply misjudge production volumes now and have not yet had time to adjust to the current level of demand.

Meanwhile, Boris Johnson continues to insist on the need to continue to implement the plan to gradually exit the quarantine. Recall that this plan contains 4 stages of gradual removal of restrictions and this Monday the third stage was implemented. Despite the fact that some medical experts believe that the “Indian” strain of “coronavirus” can provoke a third wave of diseases, the Prime Minister is in favor of lifting all restrictions in June. Johnson said that at the moment there is no reason to extend even the smallest restrictions, and the “Indian” strain of COVID is under close surveillance. Also, according to the Prime Minister, at this time, a study is being conducted on how infectious the “Indian” strain is and how much the immunity of the British has been strengthened due to vaccination.

Thus, the latest news can even be called very favorable for the British pound sterling. Vaccinations, the lifting of quarantine restrictions, the possible curtailment of the economic stimulus program next year, all this can support the British pound in the near future. However, we believe that these factors are 10-20 percent of what now affects the rate of the pound / dollar pair. The factor in the injection of trillions of dollars into the American economy remains a key factor. But in the case of the pound sterling, the “speculative factor” also works, which is very well traced in the weakness of the global correction against the uptrend in February-March of this year. Recall that the total size of the correction was only 550 points with a 2800-point increase. The pound sterling, meanwhile, has come close to its 3-year highs and in the near future may head for 6-year highs around the level of 1.5100. 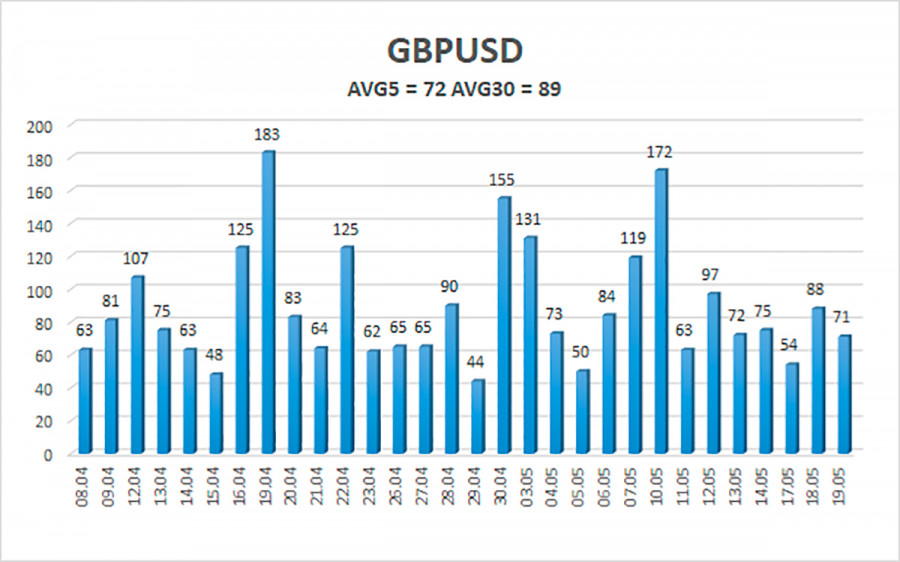 The average volatility of the GBP / USD pair is currently 72 pips per day. For the pound / dollar pair, this value is “average”. Thus, on Thursday, May 20, we expect movement within the channel, limited by the levels 1.4090 and 1.4234. An upward reversal of the Heiken Ashi indicator may signal a resumption of upward movement.

The GBP / USD pair on the 4-hour timeframe began to correct. Thus, today it is recommended to open new buy orders with targets at 1.4191 and 1.4234 after the Heiken Ashi indicator turns up. Sell ​​orders should be opened if the pair quotes fix below the moving average with the targets at 1.4069 and 1.4038.