Elon Musk, tech tycoon and CEO of electric vehicle maker Tesla, suggested that he might want to consider creating a new cryptocurrency if Dogecoin doesn’t get the necessary features with future updates. Musk said this in response to a tweet on Saturday, where a Twitter user asked why Musk is not building a new cryptocurrency with the right features from scratch.

Musk said he would do it “only if Doge can’t do it,” adding that creating another digital currency would be a “headache.”

Only if Doge can’t do it. Big pain in the neck to create another one.

Cryptocurrency transactions are processed by including them in so-called blocks, where they are stored forever. Changing how this is done can bring several benefits to the network. Less block time means blocks can be created more often and transactions can be processed faster. A larger block size will allow more transactions to fit into one block. And with lower fees, transactions will be cheaper.

However, these changes also have their drawbacks. With shorter block times and larger block sizes, the computing power and memory required to run the network increase, potentially reducing Dogecoin’s decentralization, forcing fewer people with more resources to maintain the network. While lower fees would theoretically reduce the incentive for miners to protect the network, this is not a straightforward conclusion. With other changes made to the network, the coin will be able to support a lot more transactions, and this in turn will keep the real incentive at about the same level. 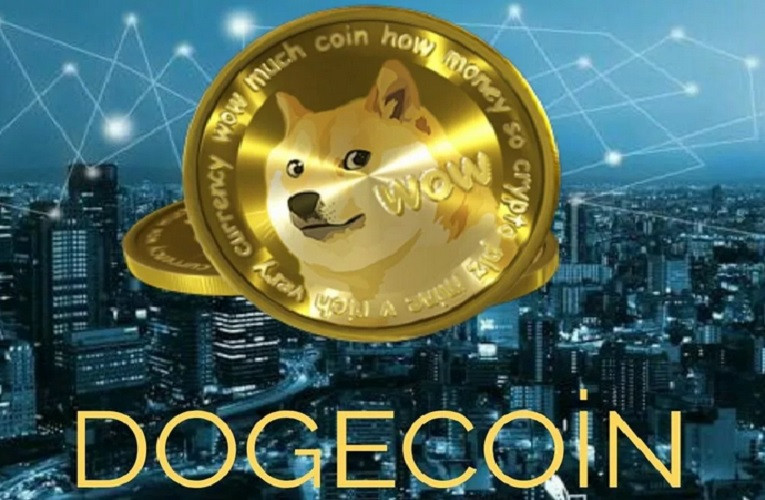 Everyone expected that Tesla CEO’s speech, or Dogefather as it was called, would push the cryptocurrency even higher, rather than fail by almost 25%.

This helped boost the market cap to $ 70 billion and above, according to Coinmarket, becoming the fourth largest coin. That amount is more than the market cap of COVID vaccine maker Moderna (MRNA), Ford Motor Company (F) and oil giant BP (BP.L).

By comparison, Amazon (AMZN) took over a decade to provide investors with a 10,000% return. Dogecoin only took five months.

Since the beginning of the year, the growth has amounted to more than 14,000%.

In addition to the support from the founder of SpaceX, dogecoin was also supported by rapper Snoop Dogg and Kiss bassist Gene Simmons.

Musk invested $ 1.5 billion in bitcoin in February and said Tesla may even start accepting it as payment for its products.

In a statement released by the Geometric Energy Corporation on Sunday, SpaceX will launch a DOGE-1 Mission to the Moon in the first quarter of next year. At the same time, Elon Musk’s commercial rocket company will accept as payment a cryptocurrency created by memes – dogecoin. This will demonstrate the use of cryptocurrency outside of airspace and lay the foundation for interplanetary trading.

In recent months, cryptocurrencies have been gaining more and more popularity after a number of financial institutions, as well as well-known investors, supported cryptocurrency and blockchain technologies, which led to a sharp increase in prices.

This positive cryptocurrency has drawn close scrutiny from governments and regulators looking to hone the sector amid growing demand.

On Saturday, the Governor of the Bank of England Andrew Bailey decided to play down the importance of the rise in the value of cryptocurrencies. Having announced that cryptocurrencies do not yet have intrinsic value, therefore, everyone who invests in cryptocurrency should understand that they can lose all their money.

Nevertheless, such comments do not stop investors of all countries. 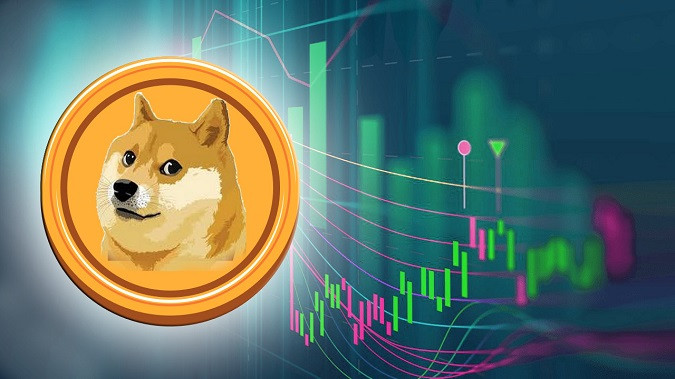 The fifth most valuable cryptocurrency, Dogecoin, has shown its decline from an all-time high after billionaire Elon Musk, who appeared on Saturday Night Live, jokingly called it “turmoil.” 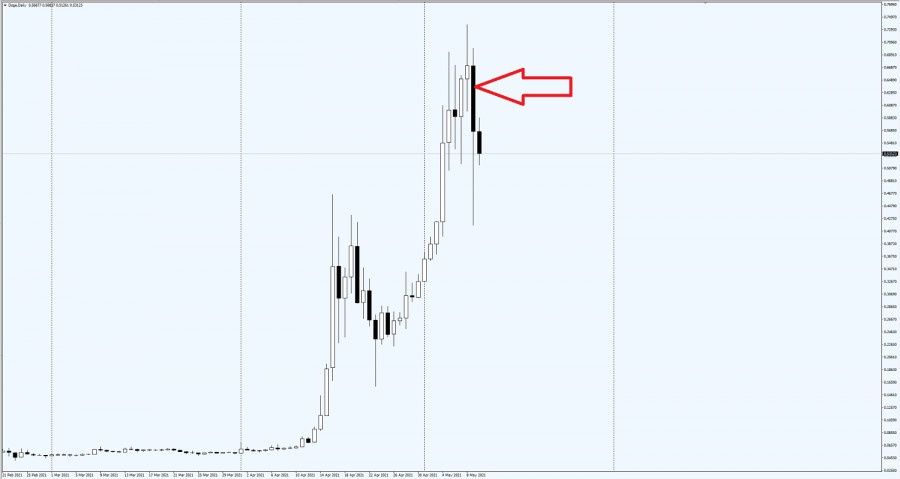 Dogecoin has not dipped below 50 cents since May 4 amid a rally in anticipation of the SNL episode, this activity could also have affected Robinhood, which previously reported some problems with the cryptocurrency, citing high volume and volatility.

Musk was repeatedly asked to explain what Dogecoin is, and after listing many facts about cryptocurrency in the guise of a financial expert, he was asked if Dogecoin was “fuss,” to which Musk replied, “Yes, it is fuss.”

Musk, 49, is the second richest person in the world with a fortune of $ 183.9 billion. In his monologue, he said that he is the first person with Asperger’s to host the show; Dan Aykroyd really was. Musk helped take Dogecoin to the next level on Friday and Saturday after tweeting a photo of himself and the Shiba Inu, the dog breed that conveys its image to altcoin, on the set of an NBC show.

Originally a joke in 2013, Dogecoin has seen more than 16,000% growth over the past year, according to CoinGecko, with Elon Musk being one of its biggest supporters, along with Mark Cuban, Snoop Dogg and Gene Simmons. Dogecoin traders around the world have hosted parties to watch the SNL episode.

In his role as a financial expert, Musk also called Dogecoin “the future of the currency is an unstoppable financial instrument that will take over the world.”
Yet the CEO of DCG Holdco Inc. Barry Silbert tweeted a few hours before the SNL episode that people should convert Dogecoin to Bitcoin, and added that if Dogecoin hits the $ 1 mark by May 31st, $ 1 million will be donated “to a community-chosen charity Dogecoin “.

Bitcoin, the largest cryptocurrency, fell more than 1% to around $ 58,000. Tesla Inc. Musk announced in February that it had bought $ 1.5 billion worth of bitcoins, and the head of the electric car giant himself spoke out about the digital asset in favorable terms.
On Friday, May 7, Elon Musk wrote on his Twitter: “Cryptocurrencies are promising, but please invest with caution”, while referring to a video in which he talked about the merits of cryptocurrency, especially Dogecoin. 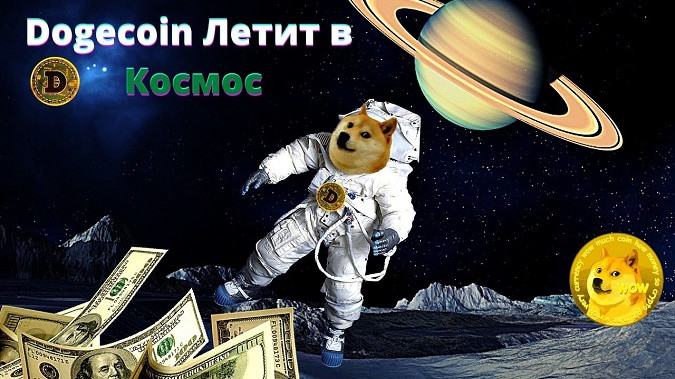 Created in 2013 as a joke, the cryptocurrency gained more than 50% in a week and climbed to the 4th place by market capitalization of the top cryptocurrencies, which led to the crash of the Robinhood trading app. Nevertheless, Robinhood said that they were able to solve previously encountered problems with the cryptocurrency on their platform.
The rally defies easy definition and continued its strong upward movement, with a gain of over 33% on Tuesday. Also noteworthy is the important news that the Gemini crypto exchange, backed by Tyler and Cameron Winklevoss, has announced that it now supports Doge and will soon allow the cryptocurrency to be traded. 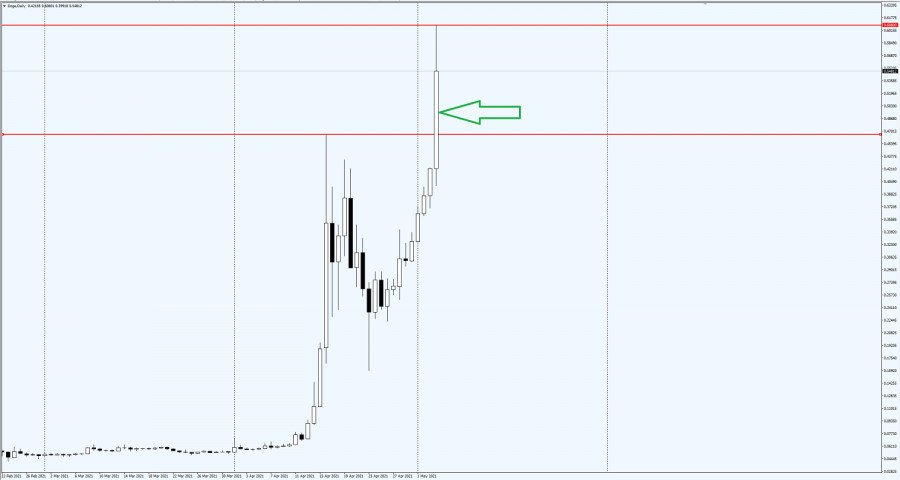 As a sign of the growing popularity of Dogecoin, Robinhood is one of the ten most downloaded apps in the Apple App Store. Meanwhile, Coinbase Global, the largest U.S. cryptocurrency exchange, does not offer Doge trading – its shares fell more than 6% on Tuesday. The stock is on track for its lowest close since its market debut last month.
Miller Tabak + Co’s chief market strategist, Matt Maylie, said, “It’s amazing that what started out as a joke has become so popular,” and Oanda senior market analyst Edward Moya wrote: “While interest in digital assets has grown in recent months, alternative coins have captured the most attention in recent days. ”

Over the past week, Bitcoin turned on the back one, showing a decrease of more than 5% per day, and demonstrates the third fall in a row, while Ethereum and Dogecoin became the leaders of conquering new highs.

The so-called Dogecoin bubble, many believed, was about to burst, but institutional interest is trying to take advantage of this momentum, and this could support another upward push. Dogecoin is growing because many cryptocurrency traders don’t want to lose sight of any hype surrounding Elon Musk’s Saturday Night Live show.
Meanwhile, many, including well-known crypto investor Mike Novogratz, warned that rallies could be volatile. Michael Novogratz, CEO of Galaxy Digital Holdings, said recently that he would be “very, very worried” if one of his friends invested in Doge.
Cryptocurrencies may become a new asset class like precious metals, according to Mike Bailey, director of research at FBB Capital Partners, but such impulses still seem volatile.