The euro showed mixed dynamics in trading on Thursday and after an unsuccessful attempt to continue its growth. Apparently the investors chose a different direction at the end of the month – taking profit on the April growth of risky assets. The data of the American economy as a whole pleased the markets, as it turned out to be better than the forecasts of economists – this is another reminder that the economy is returning to its former shape, especially against the backdrop of news about plans to completely remove the lockdown in major US cities in the middle of this summer. Let’s deal with all this in more detail.

Today’s preliminary data from the Ministry of Commerce showed that thanks to the vigorous actions of the authorities to vaccinate the population, one can count on the rapid growth of the economy this year. The report said real gross domestic product grew 6.4% in the first quarter of this year, following a 4.3% jump in the fourth quarter of 2020. Economists had expected a 6.0% increase in GDP. GDP growth in the first quarter of this year was only 1% lower than the peak recorded before the pandemic in the last quarter of 2019. This suggests that the economy will regain its former strength by the end of this year, if there are no other cataclysms. Not surprisingly, the faster GDP growth was driven by a significant increase in consumer spending, fueled by two rounds of stimulus programs from the US government, as well as the partial lifting of quarantine measures. 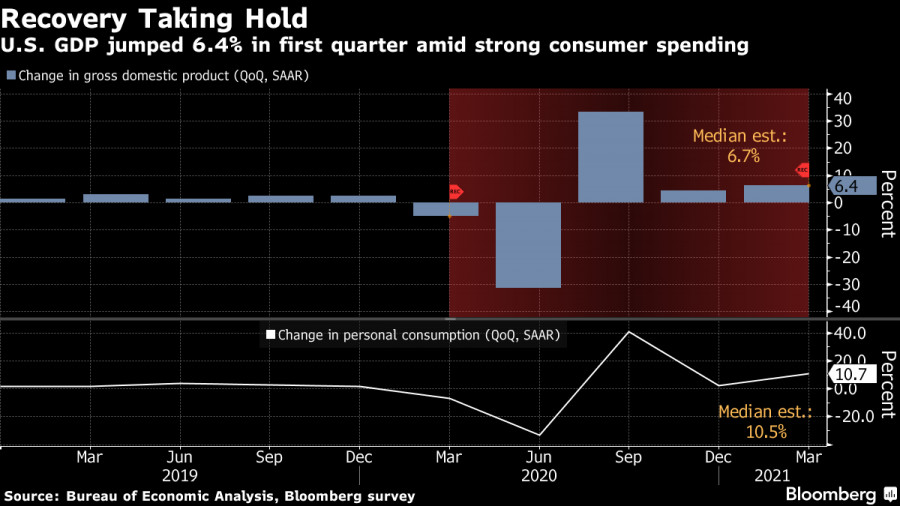 Meanwhile, consumer spending rose 10.7% in the first quarter after rising only 2.3% in the fourth quarter. The Commerce Department said GDP growth also reflected an increase in residential and non-residential fixed investment and federal government spending. In terms of inflation, consumer prices, excluding volatile food and energy price categories, jumped 2.3% in the first quarter after rising 1.3% in the fourth quarter of 2020. The rate of government spending jumped by 6.3% per annum, the highest rate since 2002, which is directly related to federal stimulus programs. Let me remind you that US President Joe Biden recently brought up for discussion two more new spending plans – one focused on infrastructure, and the other on families, which will invest trillions of dollars in the economy over the next decade.

The cost of goods and services produced domestically, adjusted for inflation, rose to $ 19.1 trillion on an annualized basis. In the near future, the figure will eclipse the pre-pandemic peak of almost $ 19.3 trillion.

The EUR / USD pair, according to the knocked-up program, reacted with growth to this news, after the statements of the Federal Reserve System on monetary policy, which were made on Wednesday, but then the sanity returned to investors, and the US dollar began to gradually strengthen its positions.

From a technical point of view, the EURU / USD pair has not changed much compared to yesterday, as low intraday market volatility kept EURUSD in a sideways channel. The breakout of resistance 1.2145 will lead to a new upward wave of the trading instrument in the continuation of the bullish trend that we saw throughout April. In this case, we can expect updates to levels 1.2180 and 1.2240. It will be possible to talk about the return of pressure on the euro only after the pair breaks below the base of the 21st figure, which will push the risk-takers to the area of ​​1.2060 and already to the bottom of the 20th figure. 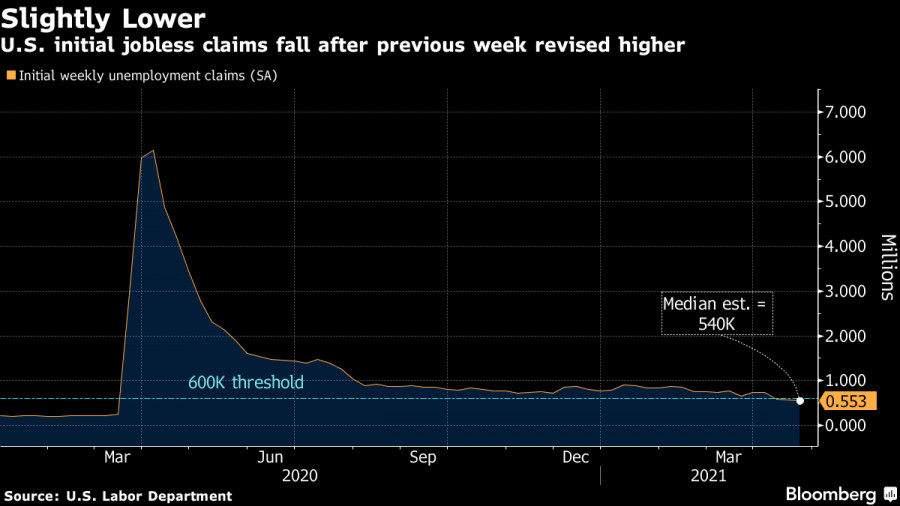 Another report from the US Department of Labor on the number of initial claims for unemployment benefits once again confirmed the good pace of market recovery after the coronavirus pandemic. These numbers are unlikely to attract the attention of the Federal Reserve, along with its chairman, Jar Powell, but in the long term they will make a significant contribution to the indicator of the overall health of the labor market. Thus, applications for unemployment benefits in the United States fell to a new low. As of April 24, the number of initial jobless claims fell to 553,000, down 13,000 from the previous week’s revised level of 566,000. Economists had expected the number of jobless claims to rise to 549,000. fall into euphoria, as the recovery in the labor market will be a gradual process. Surely the Fed will wait for this recovery to fully unfold and gain momentum, allowing them to keep interest rates at their previous levels until 2023. The Labor Department also said the less volatile four-week moving average also fell to more than an annual low of 611,750.

The Mayor of New York announced yesterday that he is going to completely lift restrictions by July 1 – a significant date for the United States, although other officials insist on an earlier abolition of quarantine measures – to count on the fact that the labor market will continue to recover. Restrictions are also being eased in Chicago. In the near future there is expected to be a big buzz in restaurants, bars and large shopping centers. Michigan said it will continue to lift restrictions once vaccination targets are met.

Also read  Fed meeting could be a catalyst for dollar weakening

The recovery in US home sales also proves that the US economy is on a stable path of recovery. A report from the National Association of Realtors said the pending home sales index jumped 1.9% in March after falling 11.5% to 109.2 in February. Economists had expected more substantial growth of around 5.0%. A home sale in progress is a transaction in which a contract has been signed but not yet closed. The increase in pending purchase and sale transactions in March indicates a strong demand for housing. Low mortgage rates and the recovery of the labor market make it possible to bet on the further growth of the indicator.

As for the technical picture of the pair GBPUSD, the breakout of the resistance 1.3970 did not take place. This range remains the main task of GBPUSD buyers. If we manage to get higher, we can expect a continuation of the bullish trend towards the highs of 1.4020 and 1.4065. If not, then buyers will have to defend the support 1.3920, since a lot depends on this level. A breakout of this range will quickly return pressure to the pound, leading to lows at 1.3860 and 1.3800.