As a result of trading on Tuesday, world stock indices fell noticeably in the wake of the ongoing coronavirus pandemic in Europe and the United States. Shares of companies that are highly dependent on this situation – tourism, airlines, as well as enterprises that produce aircraft equipment, and companies in the financial sector – came under noticeable pressure.

On this negative wave, the US dollar received support in the Forex market, despite the decline in Treasury yields. The ICE dollar index managed to gain a foothold above 91.00 points, and at the time of this writing, it is at the level of 91.20 points.

The observed rollback of the dollar rate on the foreign exchange market is likely to be of a local nature. So far, we can hardly expect its noticeable strengthening. The pressure on him may come from the publication of positive data on the American economy this week.

Also read  Overview of the EUR / USD pair. April 19th. European problems with vaccination and recovery do not worry the euro too much.

We will remind that on Thursday and Friday there will be the values ​​of sales in the housing market in America, as well as the index of business activity in the manufacturing sector and the service sector. Growth is expected everywhere. If they really do not disappoint, this will be a good reason for a local reversal of the dollar rate down against major currencies, since the main negative reasons for it still exist and have not disappeared and will restrain its growth potential.

On Tuesday, the head of the Federal Reserve, J. Powell, once again in response to Senator R. Scott, confirmed his and the Fed’s expectations of increased economic growth in the country, despite the disastrous situation with COVID-19 and inhibiting employment growth in the economy. Again, the leader of the Central Bank said that it is very important that inflation growth this year will not be critical and will rise slightly above the level usual for recent years. Thus, he made it clear that the regulator will not change its monetary rate, continuing to support the national economy, which means that the current wave of negative in the markets will be a temporary phenomenon and purchases of risky assets this week, with a simultaneous weakening of the dollar, will resume.

Also read  Trading plan for the EUR / USD pair for the week of April 26 - 30. New COT (Commitments of Traders) report.

Forecast of the day:

EURUSD is trading above 1.2000. It could correct to the 1.1995 level before resuming its gains. We believe that the final decision on Thursday by the ECB on monetary policy will not have a noticeable impact on the overall dynamics of the pair. If it holds above 1.1995, we can expect it to reverse upwards and resume growth to 1.2100.

GBPUSD found support at 1.3910. The publication of positive data on the British economy today supports the sterling. Its growth against the dollar may intensify if the general sentiment in the global markets strengthens. In this case, we expect the pair to resume growth to 1.4000.

Also read  Forecast and trading signals for GBP / USD for May 7. Detailed analysis of yesterday's recommendations and the movement of the pair during the day. 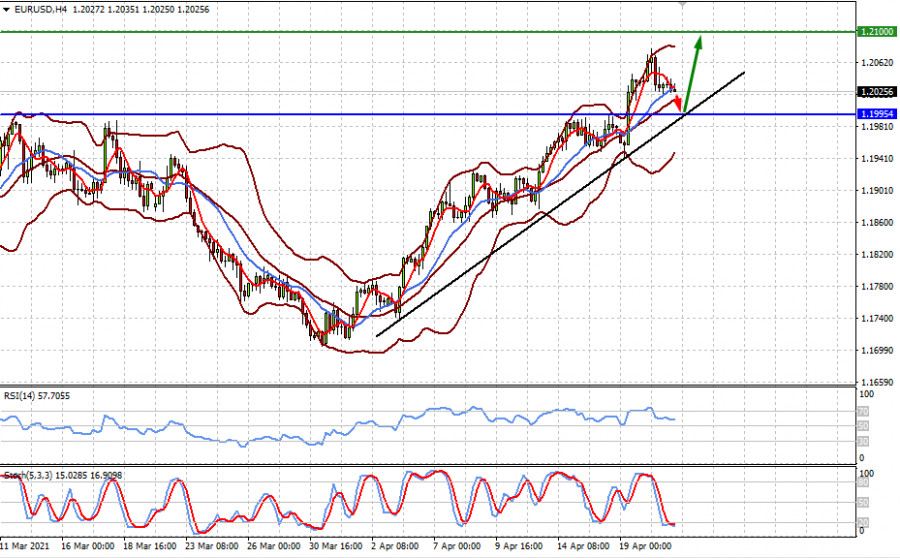