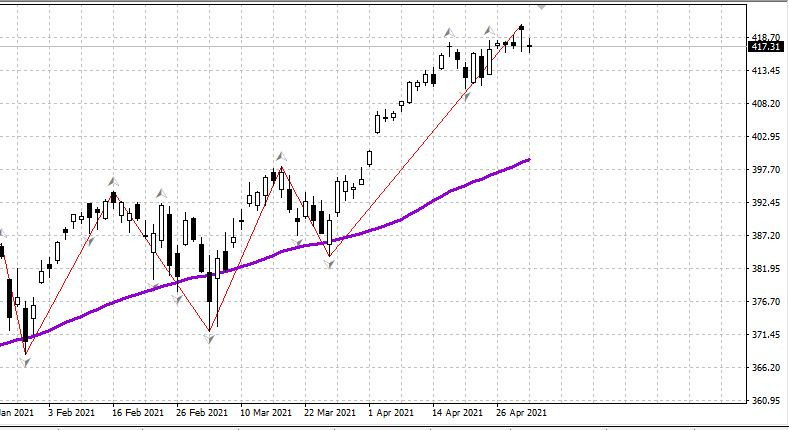 (For tech lovers – look at the top of the chart – doesn’t it look like a harami cross formation?)

Last week, the market received important news – the Fed’s monetary policy decision and the US Q1 GDP report. The Fed is determined to continue its super-soft policy of minimum rates and injections of liquidity into the markets at a rate of $ 120 billion per month, but at the same time it has noted an increase in inflation. US GDP grew in Q1 at a very high rate of + 6.2%. The GDP deflator also rose to an uncomfortable + 4.1%. Long-term unemployment in the US stabilizes at around 3.5 million

Covid in the world: An anti-record was recorded in India yesterday, +400 thousand new cases per day, today a slight decrease to +370 thousand per day. Globally, the number of new cases fell to +680 K – that is, India now supplies about half of the world’s cases of covid. Despite the dire situation in India, where it dies at about +3.5 K per day, we note that in the world without India, the maximum of the Third Wave is about 40-50% lower than the maximum of the Second Wave in January. There is a significant improvement in Brazil over yesterday, a drop in new cases in France and Germany below +15 K, and a noticeable decline in Turkey. In the US, +30 K for yesterday is a lot, but about 2 times lower than last week’s levels.

BRENT 66.20 -0.7% today. The forecast range is 65–67 dollars. Oil declines behind the US market. Oil looks weaker than stock markets – despite the global economic recovery, the market fears an increase in oil supply, which could collapse prices.

WTI 63.10 -0.7% today. Forecast – $ 62-64 range. Analysts of large banks, in particular UBS, predict an increase in oil prices, but their price forecasts practically coincide with the already reached levels of $ 63-66. This means that, even according to oil optimists, there is not much growth potential. Experts expect an increase in oil demand by 5.5-6.5 million barrels. this year on the recovery of the global economy from the pandemic.

USDRUB RUB 75.50 The dollar strengthened slightly against the ruble in the morning, from last week’s lows. Technically, however, the ruble looks strong and poised to show renewed gains against the dollar and euro. Forecast – range 74.50–76.50

EURRUB RUB 90.70 The euro looks weaker against the ruble than the dollar last week – as the euro met strong resistance on the rise in the global market, above 1.2100 and dropped significantly on Friday. A new fall in the euro is possible. The forecast is a range of 89.50–91.20.

Conclusion: Markets are likely to await new data on the US economy in the new week. A correction is likely to develop in the US market.