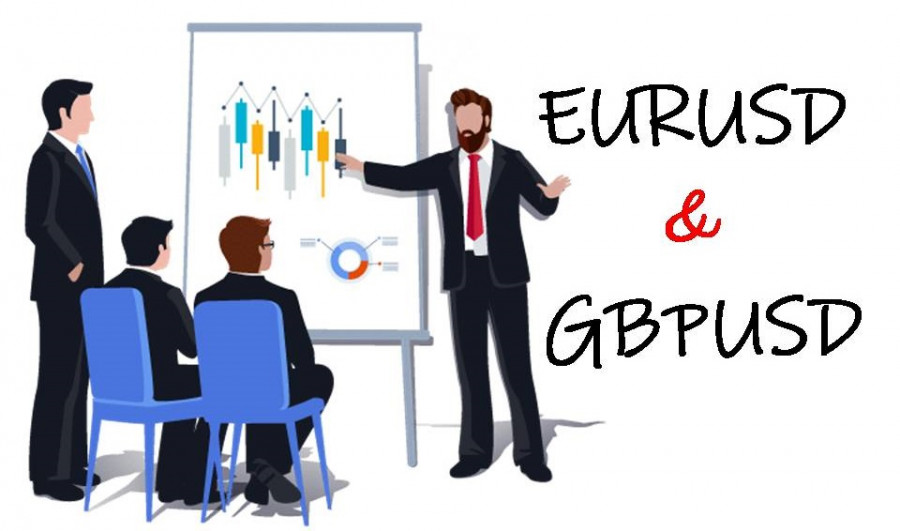 Details of the economic calendar for April 26.

The only more important statistical event of the past day is rightfully considered the data on orders for durable goods in the United States in March, where they recorded an increase of 0.5% against a decrease of -0.9% in the previous reporting period.

This indicator is prepared by the United States Census Bureau and reflects the value of orders received by manufacturers of durable goods. They are understood as those whose service life exceeds 3 years, for example, cars. Since the production of such goods involves large investments, an increase in the indicator leads to a strengthening of the national currency.

In our case, we see a general strengthening of dollar positions in the market, but there is an assumption that this is due more to a technical factor than a fundamental one.

It is worth recalling that they predicted an increase in orders for durable goods by 2.5%, while the actual figure turned out to be much worse than expected (+ 0.5%).

Analysis of trading charts from April 26

The Euro / Dollar currency pair, after a rapid upward move in the period of April 23, acquired the status of local overbought, which led to a technical correction with a scale of slightly more than 50 points.

The trading recommendation from April 26 considered an upward development, but only if the price was kept above 1.2130, which in fact never happened. Trading positions were not opened, and the assumptions of stagnation / rollback were justified in the market. 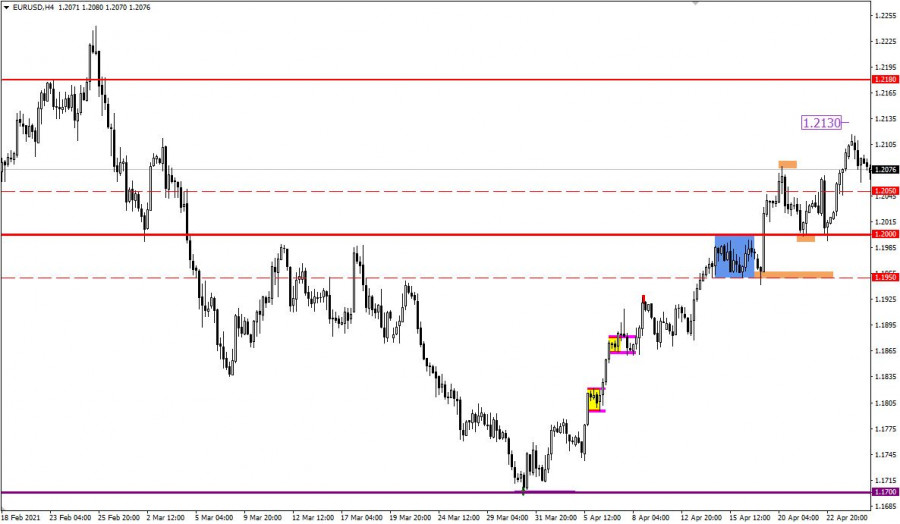 In turn, the British currency came close to the 1.3930 / 1.3950 area, which reflects the price stagnation from April 21. The natural basis associated with this area led to a reduction in the volume of long positions * (buy positions *), and this led to a pullback followed by a stagnation in prices.

The trading recommendation from April 26 considered the negative impact of the 1.3930 / 1.3950 area on the volume of long positions. Therefore, we made a decision to postpone subsequent buy positions after the price was kept above 1.3950. 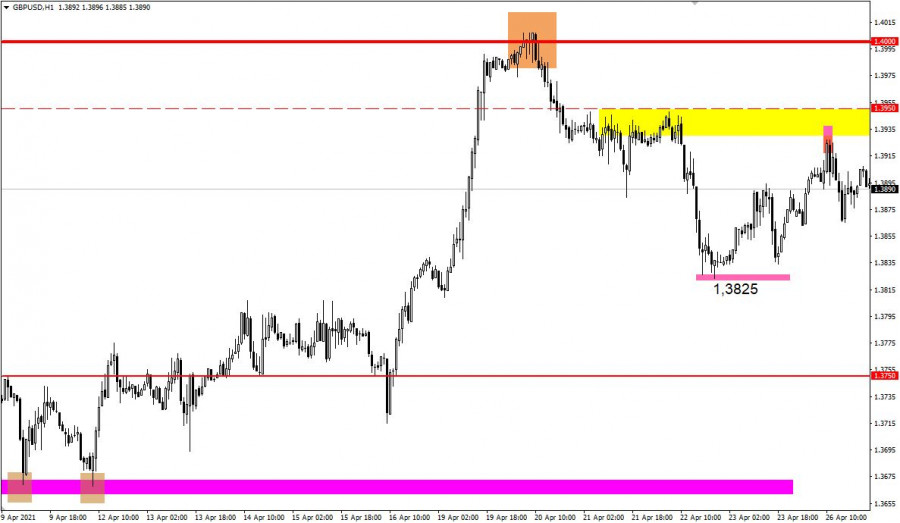 Today we have an almost empty economic calendar, the only thing that will be published is the S & P / CaseShiller house price index for February in the United States, but, according to expectations, the change in the index may be insignificant, from 11.1% to 11.6% …

The index is prepared by the agency Standard and Poor’s, it covers the change in the value of residential real estate in 20 regions of the United States. This indicator is considered an important indicator of the real estate market, and its growth may lead to the strengthening of the national currency.

Analyzing the current trading chart of the Euro / Dollar, you can see that the stage of the rollback from the local maximum of 1.2116 is still relevant in the market, which can lead the quote to the value of 1.2050.

In the form of signal coordinates, relative to which the main manipulations will be performed, the following values ​​are highlighted: 1.2050 – holding below it can lead to prolongation of the current move in the direction of 1.2000, as well as the value 1.2130 – the breakdown of which will resume the upward cycle in direction 1, 2180-1.2250. 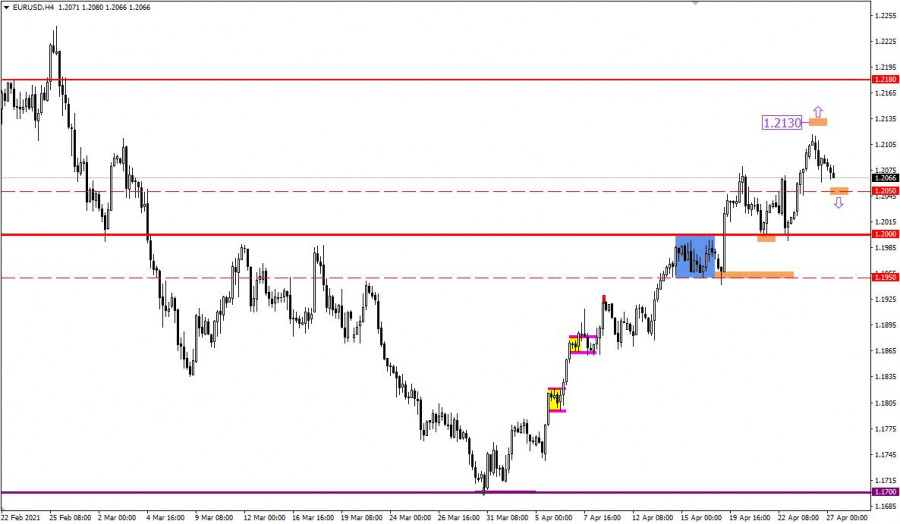 Analyzing the current Pound / Dollar trading chart, you can see the amplitude movement of the price, followed by compression to the 1.2874 / 1.3907 borders. There is an assumption that the compression process is an accumulation process that will eventually lead to a new round of acceleration in the market.

A breakdown of this or that border of stagnation at 1.2874 / 1.3907 may well lead to speculative manipulations in the direction of a breakdown.

The main trading operations will be considered by traders in relation to the control values ​​of 1.2860 – a breakdown of this coordinate may lead to an increase in the volume of short positions in the direction of 1.3825; 1.3950 – holding the price higher may prolong the previously set upward cycle. 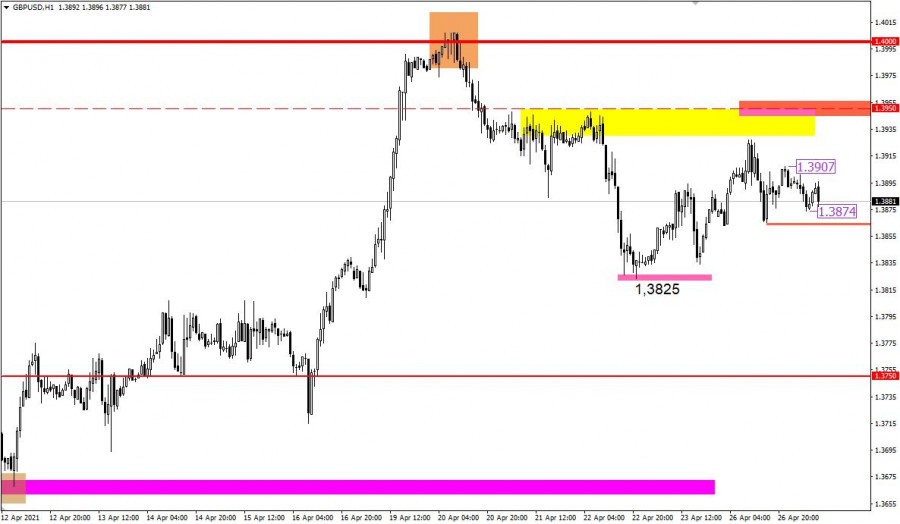 It is worth buying or selling the American dollar

Trading recommendations on the foreign exchange market for novice traders – EURUSD and GBPUSD 26.04.21