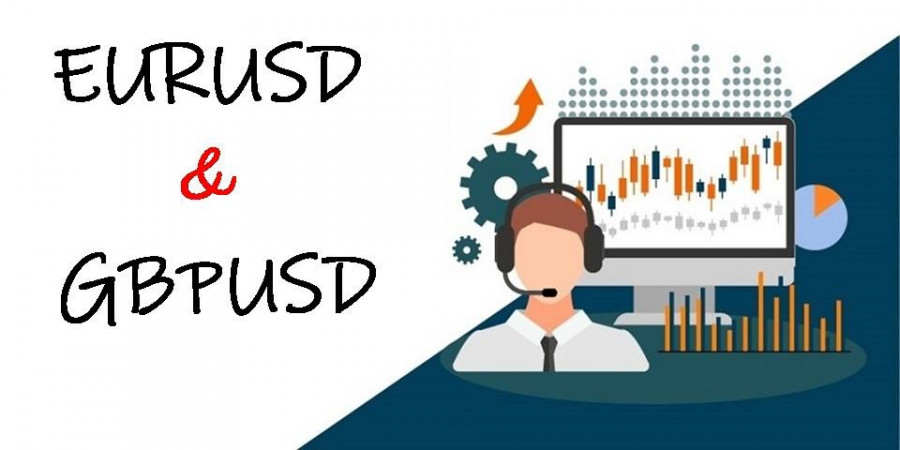 The economic calendar during the past trading day had a lot of events, but the market reaction followed at the same time.

Details of the economic calendar for April 22.

First of all, it is worth starting with the scheduled meeting of the European Central Bank (ECB), where the regulator decided to keep the interest rate at a record low zero level. Such a decision did not come as a surprise to traders, as well as leaving the parameters of the PEPP * (Pandemic Emergency Purchase Program *) asset purchase program unchanged.

During a press conference, the head of the ECB Christine Lagarde noted that the abandonment of stimulus measures is premature. She also noted that the ECB will continue to implement the PEPP asset purchase program, and at a significantly higher pace than in the first months of the year.

In simple words, the regulator does not plan to raise the interest rate in the near future, and their monetary policy program remains unchanged, which became a signal for speculators to sell the euro.

In turn, data on applications for unemployment benefits in the United States were published synchronously with the press conference, where a surprise awaited traders.

Based on forecasts, the volume of initial applications for benefits should have increased from 586 thousand to 617 thousand, but as a result, their volume dropped sharply to 547 thousand. With the current indicators, we are getting closer and closer to the pre-crisis level.

Also read  After the US releases, the markets took an unexpected pause

The volume of repeated applications for benefits also decreased, from 3 708 thousand to 3 674 thousand, which is slightly worse than the forecast, but still a decrease.

Claims reflect the number of citizens currently unemployed and receiving unemployment benefits. This indicator reflects the state of the labor market, where the growth of the indicator negatively affects the level of consumption and economic growth.

An increase in the number of applications leads to a weakening of the national currency.

Analysis of trading charts from April 22

During the last trading day, the Euro / Dollar currency pair managed to show local activity, but, as before, it was limited by the boundaries of the 1.2000 / 1.2050 amplitude with an error of 20 points.

The trading recommendation of April 22 considered the coordinates 1.1990 (Sell) and 1.2080 (Buy) as the starting point in the upcoming acceleration, but at the end of the day, you can see that the values ​​were not affected by the quote. 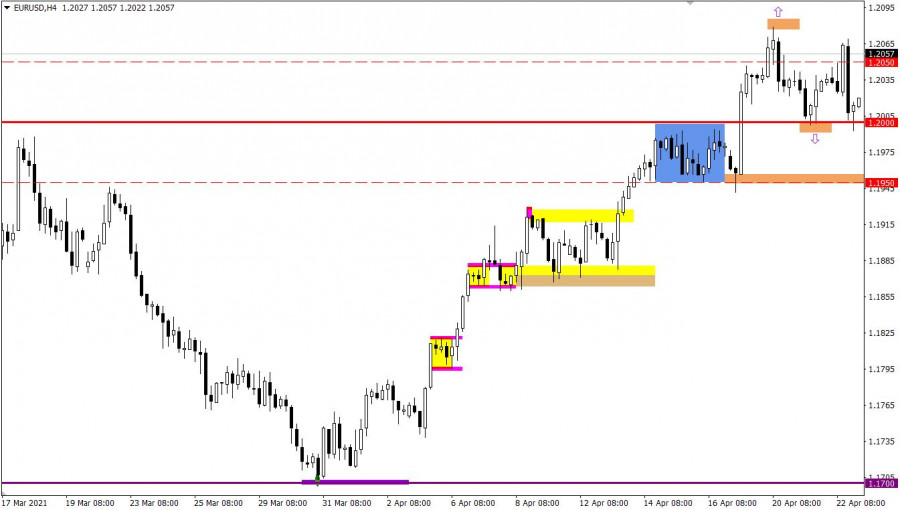 In turn, the British currency during the last trading day showed a fairly strong downward activity, as a result of which the pound sterling fell by more than 110 points.

The trading recommendation of April 22 considered the subsequent weakening of the value of the British currency if the price was kept below 1.3900. The first predicted coordinates, represented by the value of 1.3850, was executed during the previous day, as a result, traders earned 50 points, which is $ 50 with a deal volume of 1 InstaLot. 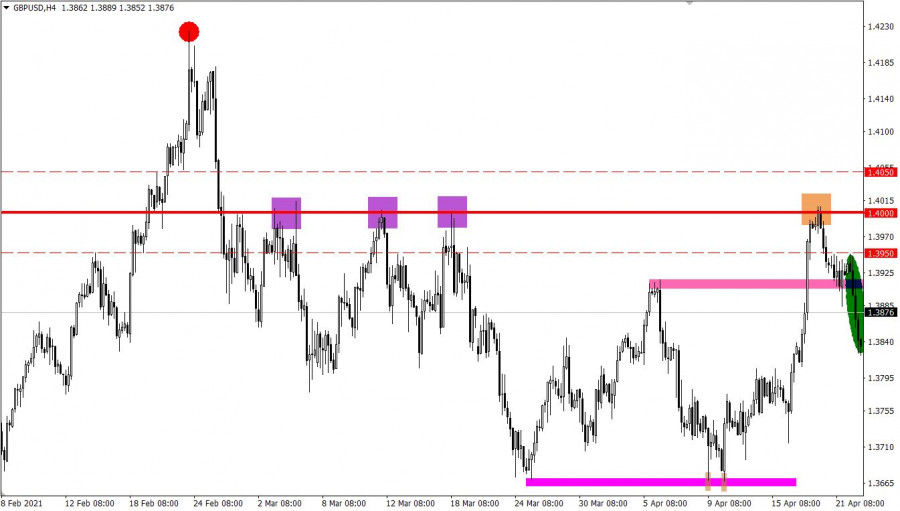 Retail sales in the United Kingdom have already been released today in terms of the economic calendar, which reflected not just growth, but space flight + 7.2% on an annualized basis, this is when you consider the fact that the previous data was negative -3.6 %

The Retail Sales Report is issued by the UK Office for National Statistics and reflects the total number of receipts for purchases in retail stores. Changes in retail sales are generally considered an indicator of consumer spending. The growth of the indicator should lead to the strengthening of the national currency – GBP.

In our case, the news was processed by traders, but in a local manifestation.

The next news was the publication of data on business activity in the UK, where in the service sector there is an increase in the index from 56.3 points to 60.1 points. While in the manufacturing sector, the index is growing from 58.9 points to 60.7 points.

The data is positive, but the market ignores them.

During the American trading session, data on business activity in the United States will be published, where a widespread growth of indices is predicted.

The indices will be published at 16:45 Moscow time.

Analyzing the current trading chart Euro / Dollar, you can see a fairly rapid upward trend during the start of the European session, but the quote is still within the deviation from the psychological level. 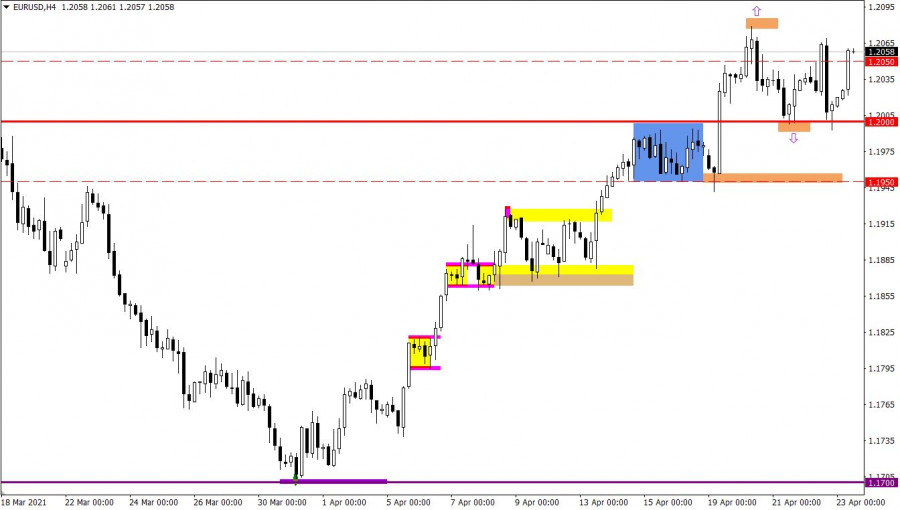 Analyzing the current Pound / Dollar trading chart, you can see that the coordinates of 1.3825 are used as a periodic pivot point, and a rollback has occurred relative to it. It can be assumed that the previously specified downward cycle from the psychological level of 1.4000 is still relevant among traders, but subsequent sell positions will be considered after the price has been kept below 1.3820, in the direction of 1.3750. 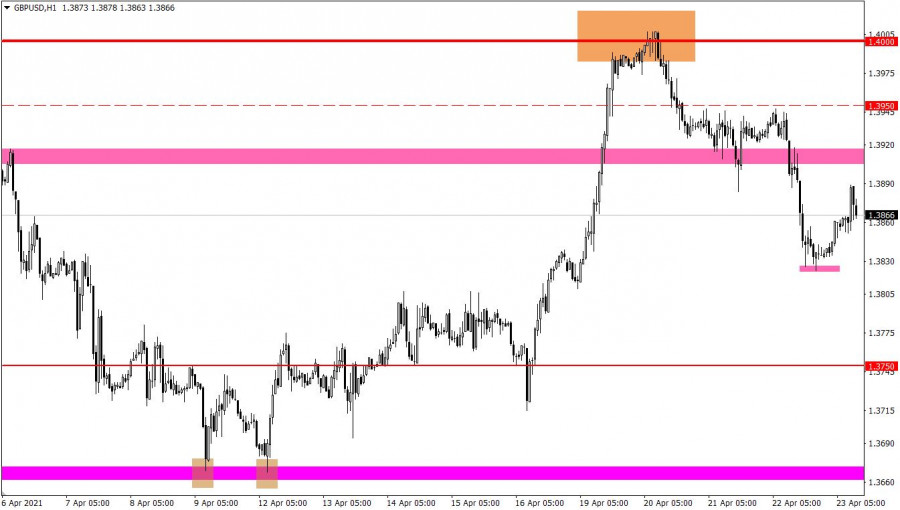 Trading recommendations for the foreign exchange market for novice traders – EURUSD and GBPUSD 22.04.21