The Russian ruble is gradually recovering from the shocks associated with the introduction of the so-called “nuclear sanctions” by the United States, and is preparing for a meeting of the Bank of Russia. 17 out of 29 Reuters experts expect the key rate to rise by 25 bp to 4.75% at the meeting on April 23, while the derivatives market gives a 100% chance that the rate will rise to 5% at the next meeting of the regulator in June. Tightening of the monetary policy, as a rule, supports the national currency, therefore, the drop in the USDRUB quotes towards the base of the 76th figure looks logical.

Vladimir Putin promises to give an asymmetrical and tough response to the pathetic attempts of the West to contain Russia, and Bloomberg believes that this time Moscow will do what it did before – it will continue to reduce its dependence on the US dollar, withdraw assets from the United States and sell less debt to non-residents. … In 2020, the share of gold in the gold and foreign exchange reserves of the Central Bank of the Russian Federation in the amount of $ 581 billion for the first time in history exceeded the share of the American currency. It is about 24% and 22%, respectively. At the same time, back in 2018, the dollar accounted for 40% of the total amount of reserves.

Also read  Is it worth selling shares in May, as popular wisdom says? 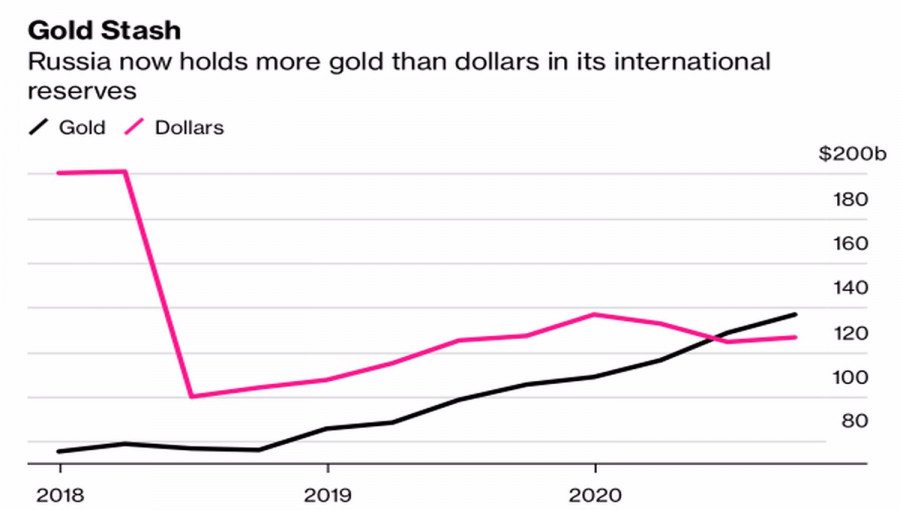 If back in 2017 the share of Russia’s international reserves held in the United States was 30%, then in the second quarter of 2018 it fell to 7%. The reason for the sharp decline in the indicator was the sanctions against Rusal, which were later lifted, as they caused serious turmoil in the financial markets. 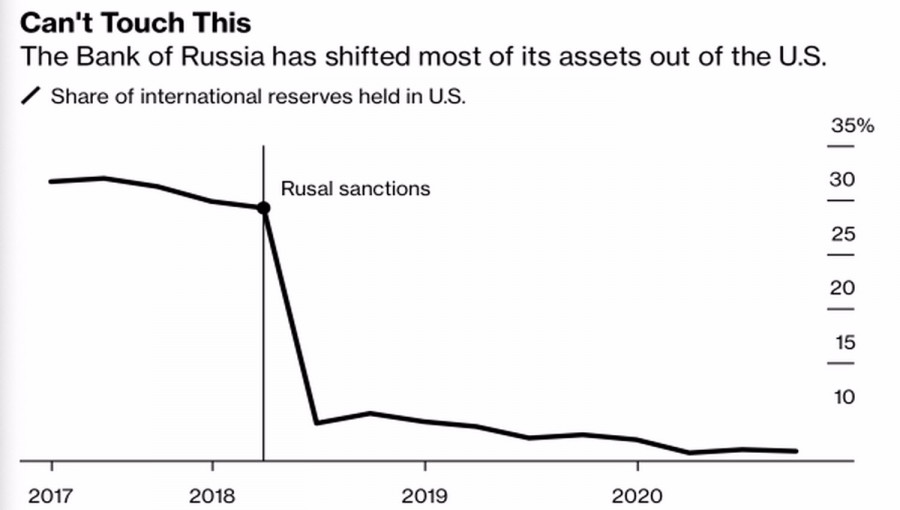 The United States clearly does not want to repeat that story, so the White House decided to prohibit American investors from buying Russian bonds only at auctions. There is still such an opportunity in the secondary market, but the further escalation of the conflict between Washington and Moscow is fraught with new, more ambitious sanctions. Including disconnecting Russia from the international payment system.

The ruble has been living under the threat of sanctions for many years, so the introduction of a ban on the purchase of bonds issued in the Russian Federation by American investors did not cause USDRUB to rise to 80 and above. The market bought the rumors and sold the fact. Nevertheless, the presence of risks of new measures of influence from the West in response to an asymmetrical and tough response from Moscow will continue to put pressure on the positions of the “bears”. They would gladly launch a new attack amid high global risk appetite, the acceleration of the global economy, strong oil positions and the return of investor interest in the assets of developing countries due to lower yields on US Treasury bonds, but the presence of geopolitical threats prevents this.

Technically, on the daily USDRUB chart, we have a Splash and Shelf pattern. At the same time, a breakout of the lower border of the consolidation range 75.3-77.55 (“shelves”) is fraught with the activation of the “Shark” harmonious trading model, the target for which is at 88.6% near 73.1. Thus, a successful storming of the support at 75.3 will be the basis for opening short positions with a target of 73.1. 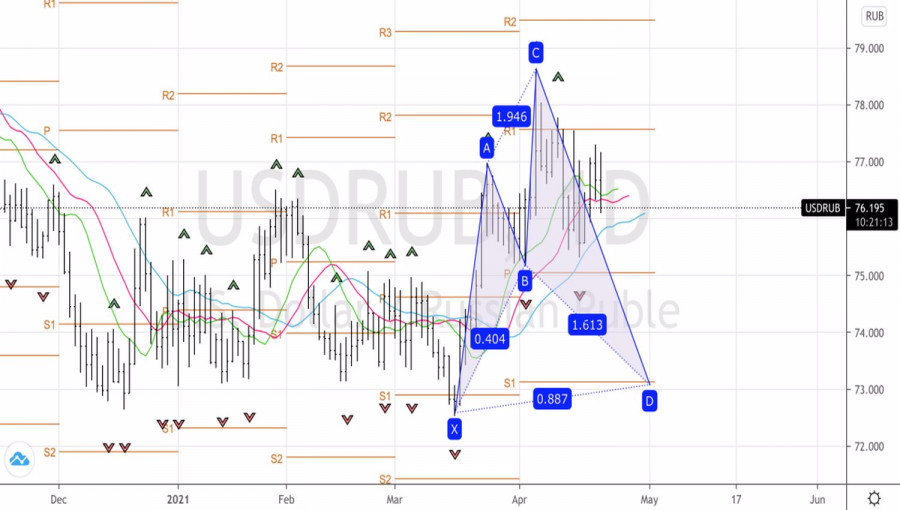