On Tuesday, the decline in US stock indices continued, which led to a decrease in the demand for risk and a drop in bond yields. The catalyst for the decline was Netflix, which had less than 4 million subscribers in the 1st quarter instead of the expected 6 million, Netflix shares fell by more than 10%. The company is expected to blame Covid, although the connection here is more than ephemeral, given that the subscription to content just should grow during the period of quarantine restrictions. Be that as it may, the negative overwhelmed world markets, Asian exchanges lost an average of 1 to 2%, but, as usual, it is not only about American financial statements.

Two events at once can shake up the oil market. The Bank of Canada is holding a meeting on monetary policy today, it is expected that it can announce the beginning of the exit from soft monetary policy, this is a factor of pressure on oil. The second event is bigger – the Judicial Committee of the US House of Representatives has put forward a bill that will allow the Justice Department to enforce antitrust laws against OPEC members. The adoption of the law will mean another attempt to extend the US jurisdiction to the whole world, the result may be the most unexpected.

The Bank of Canada will hold a meeting today, at which it is expected to announce the start of withdrawal from stimulus programs. This is the consensus opinion of the market, but there are factors both in favor of such a decision and against it.

First, Canada has a significantly more balanced budget than most of the G10 countries. The government is capping its debt-to-GDP ratio at 51.2% this fiscal year, despite massive new spending, and expects the debt-to-GDP ratio to fall next year. Secondly, immediately before the meeting, inflation data will be published; it is expected that the annual price growth will show 2.3% in March, which is already higher than the BoC target. Third, the labor market is recovering faster than in the United States, and forecasts for consumer demand growth are generally very positive.

Weekly data on futures / options on CAD in favor of further selling the Canadian, the net long position slightly decreased by 22 million, to 192 million, the margin is minimal, the trend is negative. The target price is above the long-term average, which suggests further growth. 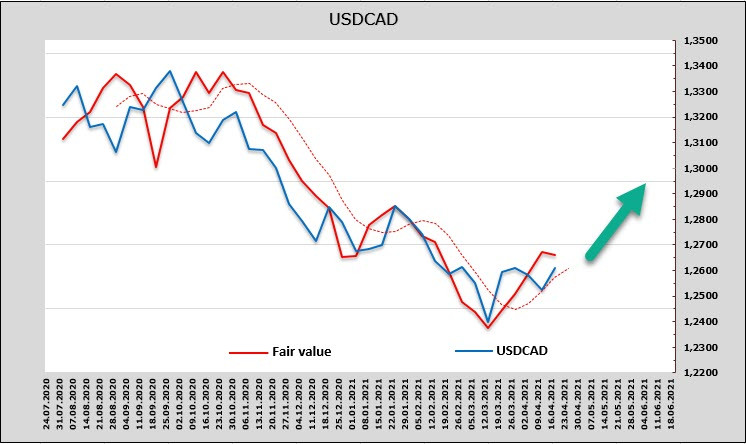 We still adhere to the position that the 1.2364 base was formed on March 18, the trend turned up. If the Bank of Canada plays its role in accordance with the scenario, then the price may go to 1.2460 / 70, but after that it will still start to turn upwards. If the Bank of Canada is cautious and will not announce the start of the exit from the stimulus programs, then USDCAD will go up and consolidate above 1.2646 and will try to reach 1.2730 / 40.

Japan’s foreign trade report for March turned out to be better than expected, imports grew by 5.7% y / y, exports by 16.1 y / y, such high numbers are largely due to the effect of a low base, but, nevertheless, positive is evident. Industrial production is gradually recovering, but instead of opening the economy and lifting stimulus measures, Japan faces the opposite consequences.

It’s all about the rate of vaccination. Despite the fact that refuseniks, according to polls, are only about 4%, the Japanese government is not able to provide everyone with vaccines. The purchase of the necessary volumes of vaccines is expected not earlier than September, and the coverage of the population, which allows the formation of herd immunity, is expected not earlier than in a year. As a result, there is a growing threat that the government will introduce a third state of emergency, which will set back foreign trade, industrial production and consumer demand.

Also read  Europe comes out of the tailspin

Yen futures continue to sell for a weekly decline of 79m, net short hit -6.683bn. At the same time, the target price is turning down. 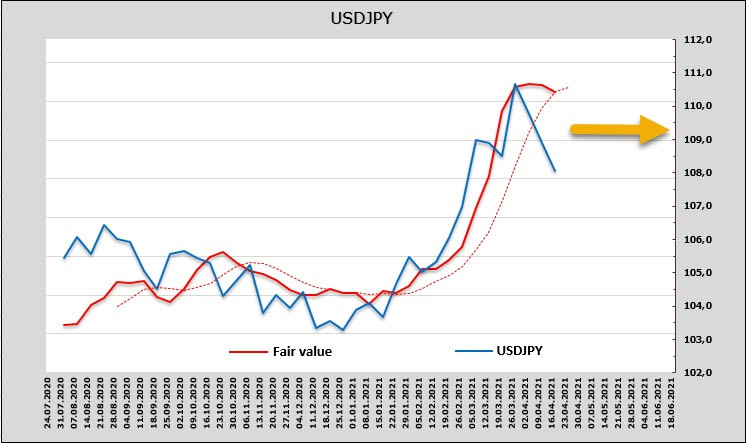 The likelihood of further decline in USDJPY has become slightly higher, the nearest supports are 107.80 and 106.80. This decline should be considered corrective, it can develop only in case of a further decrease in UST yields and an increase in demand for risk, the dollar is a clear favorite in the long term, the probability of an upward reversal and a test of 112.23 is noticeably higher than a decline to the 102.60 minimum.