If at the end of April the British pound was floating on the waves, strengthening after the “dovish” rhetoric of the FRS and falling in response to strong macroeconomic statistics in the United States, then at the beginning of May it was time to take the reins into their own hands. On Thursday, two extremely important events for the sterling will take place: the meeting of the Bank of England, at which the historically important decision to curtail QE will most likely be adopted, and the parliamentary elections in Scotland and Wales. If the Scottish nationalists win the vote, the topic of an independence referendum will undermine the efforts of the GBPUSD bulls to restore the upward trend.

The last plebiscite took place in 2014, when the Scots decided to remain in the United Kingdom with 55% of the vote to 45%. Nevertheless, the idea of ​​independence is gaining momentum, and if the nationalists get 80 seats out of 129 in the Scottish parliament, the option of holding a referendum until 2024 will become basic, despite the loud statement of British Prime Minister Boris Johnson to block the issue. As a result, the volatility of the sterling may increase, which should be considered a “bearish” factor for GBPUSD.

Also read  Forecast and trading signals for GBP / USD for May 3. Detailed analysis of yesterday's recommendations and the movement of the pair during the day.

At the same time, according to research by Morgan Stanley, the chances of implementation of the application for a popular vote are only 15%, and Citi estimates the likelihood of Scexit at 35% over the next 10 years. The timeframe is too distant to immediately affect the pound rate. 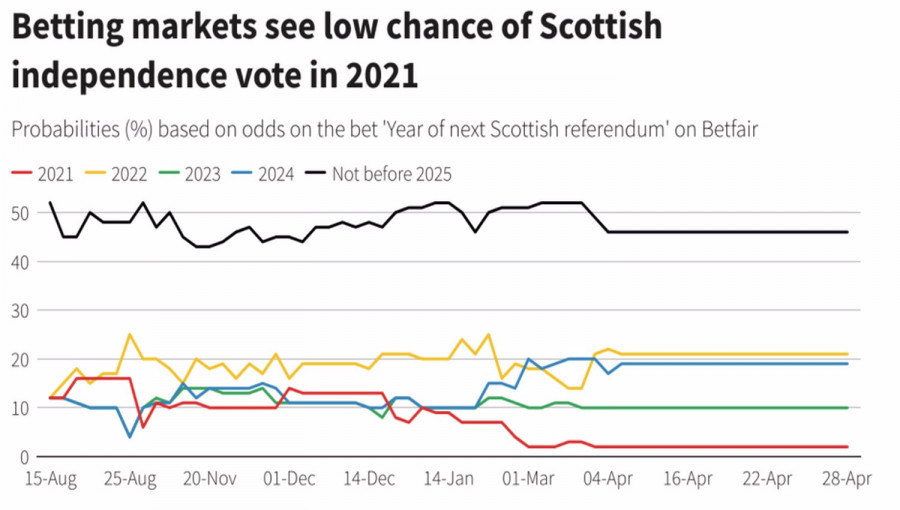 A much more significant event in the short term is the decision of the Bank of England to wind down QE. Andrew Bailey and his colleagues found themselves in a rather awkward position. If they continue to buy assets at the same rate of £ 4.4bn a week, the quantitative easing program will end three months before the end of this year. The announcement of a reduction in the scale of QE, as evidenced by the example of the Bank of Canada, is likely to result in a strengthening of the national currency.

Alternatively, BoE may choose to increase its target from the current £ 875bn to a higher value. The regulator has already done this in 2020, but it is impossible to compare the current situation in the economy of Foggy Albion with last year. Then the country was raging recession and pandemic, now after a gradual opening from April 12, leading indicators signal the rapid growth of GDP in the second quarter. Outlets and restaurants are reopening, retail sales have surpassed pre-pandemic levels, and business activity peaked since 2013.

Thus, it will be difficult for the Bank of England to make a choice, and according to NatWest Markets, the probability of announcing the rollback of the quantitative easing program is about 70%.

Technically, on the daily GBPUSD chart, there is a classic correction after the formation of wave 4-5 of the Broadening Wedge pattern. The return of the pair quotes to the 38.2% and 23.6% Fibonacci levels, which correspond to the levels of 1.3875 and 1.3925, is a reason to buy sterling against the US dollar. 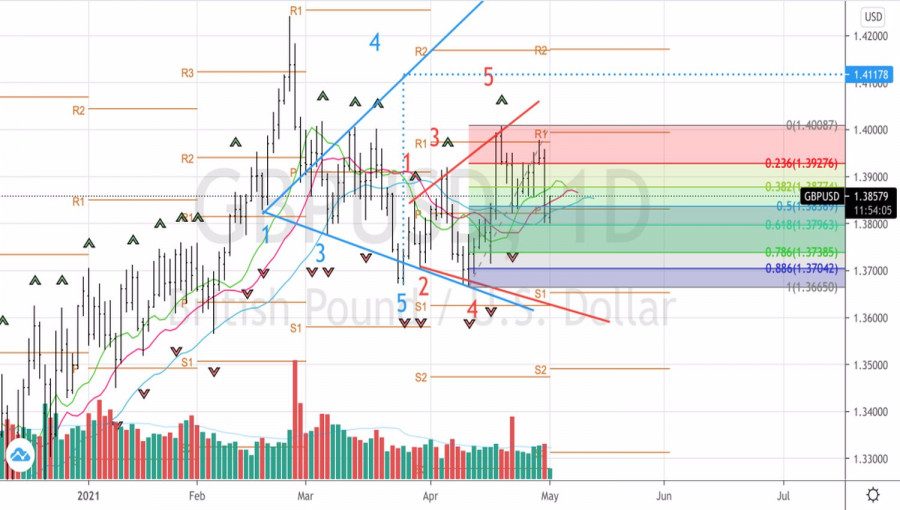