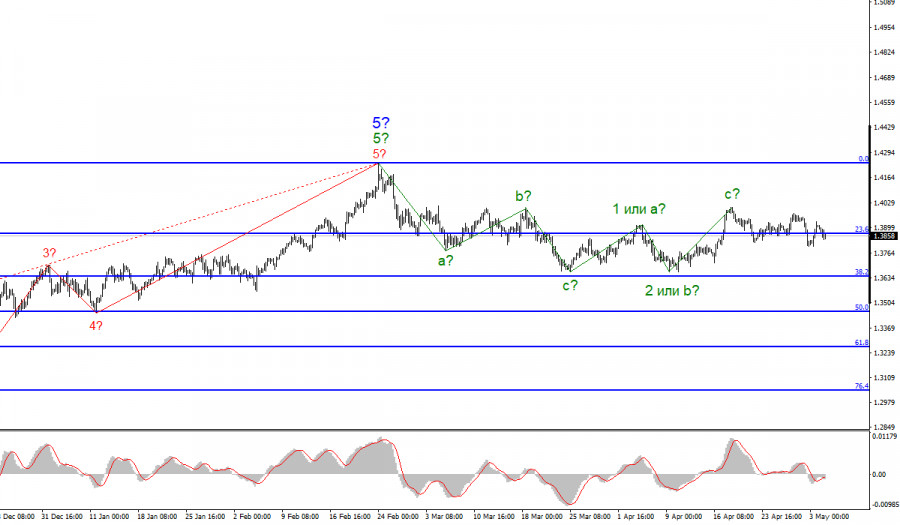 For the Pound / Dollar instrument, such movements continue, which are very difficult to attribute to any particular wave structure. Over the past few days, the demand for the American currency has grown sharply, which allowed the instrument to go down slightly, but this decline does not at all fit into the current wave counting, although it does not violate or cancel it. I still expect the formation of a new three downward waves, but at the same time I admit that the wave counting will require adjustments and additions. The entire movement after April 20 does not look like a new three downward or even the first wave of this structure. Thus, this section can take the form of a wave d, and the construction of the upward trend section, which began on March 25, will continue and take the form a—b—c—d—e… In general, there are really plenty of possible variants of wave counting now. I remind readers that the wave counting should be as unambiguous as possible in order to make money on it, which is clearly impossible to say about the Pound / Dollar instrument.

The news background for the Pound / Dollar instrument in recent weeks and months remains very controversial. On the one hand, the markets have not received positive news or economic reports from the UK for a long time. Actually, the entire state of the country’s economy reflects the monetary policy of the Bank of England, which does not change. Not only does it not change, but it is not even going to change in the coming months. No hints of a possible tightening of monetary policy. Thus, it is very difficult to expect an increase in demand for the Briton based on the news. On the other hand, the Briton has already been for more than a year in the construction of an uptrend. Bank of America believes that the pound sterling will begin to fall only next year. According to currency expert Kamal Sharma, this year the pound sterling could strengthen even more, as the global economy began to recover from the pandemic, but next year it will decline, as the effects of Brexit will be better manifested in 2022. Bank of America experts believe that the total British economy will fall from 5% to 7.5% due to Brexit. Kamal Sharma believes that despite a possible decrease in the key rate by the Bank of England to the negative area, the pound sterling is currently not experiencing any pressure on itself, which is very strange. Most of the improvements in statistics are already included in the current price. In other words, Bank of America experts believe that the Briton is heavily overbought and its real value should be much lower than the current rate. Kamal Sharma also believes that the pound sterling is supported by currency speculators, who continue to believe in the recovery of the UK economy after the pandemic and Brexit, but in reality this recovery has long been won back by the markets. Thus, the forecasts of large banks boil down to the fact that the pound sterling will lose demand in the long term.

At this time, the wave pattern continues to get confused, so I recommend waiting for the wave situation to clear up. There are at least several variants of wave counting, each of which can be implemented in the coming weeks. 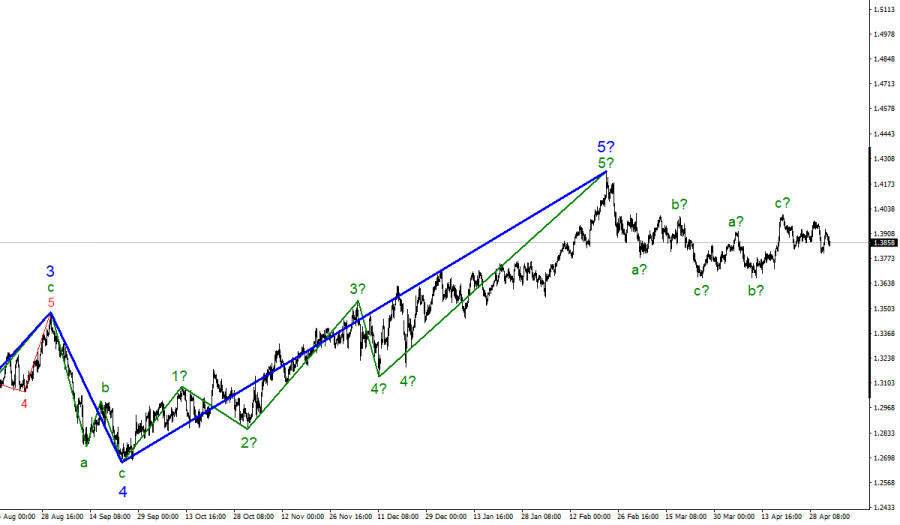 The downtrend section, which began its construction a couple of months ago, is taking on a rather ambiguous form. As I said above, several wave counting options are possible at once. Unfortunately, different options offer different further developments. Therefore, it may be necessary to wait for some time for the current wave counting to clear up a little.