The European currency and the British pound reacted with a decline to the news that the next negotiations between the EU and the UK on Northern Ireland were on the verge of failure. Official London said that it is still considering the possibility of unilateral action to ensure a smooth flow of supplies from the UK to the region.

European Commission Vice President Maros Sefcovic said the EU was running out of patience and described relations with the UK as “uncertain.” Immediately after the meeting, fearing that the escalation of the crisis in Northern Ireland would escalate into a trade war, David Frost, Minister for Brexit, said that even after a two-hour meeting with Shefcovic in London, the parties failed to achieve a breakthrough in terms of checks, but the final point at the meeting was not delivered. As a result, “tough measures” by the EU will be postponed until June 30, and until that moment, attempts to find a solution to the problem will continue. 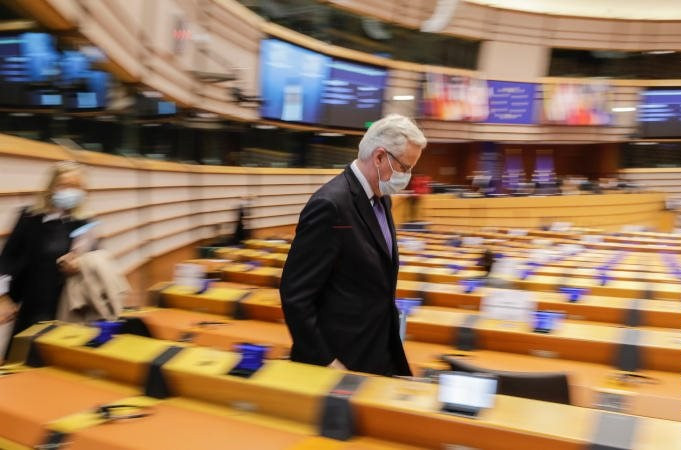 However, behind the scenes, British politicians were more harsh in stating that “all acceptable options remain on the table.” We have seen such a game from the British Prime Minister in past years, when an attempt was made to bargain for the best conditions for ourselves under the Brexit agreement. However, the EU emerged victorious. It seems that someone does not want to learn from their own mistakes. However, the EU is also interested in avoiding a trade war that no one wants to get involved in, especially given what time it is.

During the press conference, the representative of the European side repeatedly expressed disappointment over the unfulfilled promises by Great Britain to implement the protocol in Northern Ireland exactly in the form in which it was signed. “If the UK takes further unilateral action in the coming weeks, we will not hesitate to respond quickly, firmly and decisively,” said the Vice President of the European Commission.

Also read  On the eve of the meeting of the Bank of Canada.

First of all, the EU, of course, threatens with lawsuits against the UK, but measures to increase tariffs on meat products and other goods are not ruled out either. Shefchovic also noted that until January this year, the UK had enough time to express concerns about the agreement that was reached, as well as agree on checks that, in their opinion, are not working as needed.

The European politician gave a trivial example, according to which the whole procedure can be sufficiently simplified. “If you are shipping sausages, cheese or meat products to Northern Ireland and not to the EU countries, there is a very simple solution – just stick a ‘Northern Ireland only’ sticker on them and … we will agree on a simplified export health certificate. Do you think any of this happened? No, nothing has been done, ”he said.

The UK said in a statement that there has been no significant progress on simplified health regulations and certifications that would have avoided more than half of the additional checks currently being conducted by EU customs.

In any case, the outcome of the meeting put a strong pressure on the euro and the British pound, since no solution to the problem was found, and uncertainty is the biggest headache for traders and investors.

As for the technical picture of the pair GBPUSD, then despite the large yesterday’s fall in the pound, it was not possible to get out of the side channel. The most optimal scenario would be to buy a trading instrument after a decline in the area of ​​the lower border of the side channel 1.4085, or after the bulls manage to return to the middle of the 1.4140 channel. Only after that can we expect the GBP / USD to strengthen to the 1.4190 area. If the pressure on the pound persists in the morning today, and buyers have nothing to offer in the area of ​​resistance 1.4140, an unsuccessful attempt to rise above this level will be a good signal to open new short positions with the aim of breaking the lower border of the side channel 1.4085 and going beyond it from the subsequent renewal of the lows of 1.4040 and 1.4000.

The European Central Bank will meet today, but as ECB officials have already adjusted market expectations, the outcome will have a limited impact on EURUSD. Nobody expects from the regulator any changes or adjustments in bond purchase programs and monetary policy. A wait-and-see position of the central bank will not provide strong support for the euro, but pressure on the trading instrument is also unlikely to be formed, given the expectations of a strong recovery in the region’s economy in the summer.

During a press conference, ECB President Christine Lagarde will reiterate his concerns about the unpredictable impact of the coronavirus pandemic and will draw attention to the uneven economic recovery after it and high unemployment. Inflation will also not be something the ECB will focus on, as politicians have been following the example of the Federal Reserve lately. And there things are much more serious, but no one is in a hurry to move towards the reduction of the bond purchase program there either.

The fact that the eurozone economy is quite far behind the United States also allows us to take a wait-and-see attitude and not rush to change decisions at the first signs of revival of inflationary pressure. One of the reasons why European countries are lagging behind the United States is the fact of later vaccinations and the lack of the required amount of vaccine. At least several months have yet to pass before vaccination goals are achieved, and new strains of the virus are already threatening to restrict freedom of movement in the summer. Even German officials, inclined to aggressive changes in the ECB’s policy, are in no hurry to declare such a need in the future.

Also read  USD/CAD: Falling to lows of more than 1-week, the buying in falls could help limit losses

As for yesterday’s fundamental statistics, data from Destatis on German export growth in April this year did not have an impact on the euro, even despite the slowdown that was observed. Exports rose just 0.3% month-on-month in April after rising 1.3% in March. Economists had forecast monthly growth of 0.5%. Meanwhile, imports fell 1.7% in April versus 7.1% growth in the previous month, which was better than economists’ forecast. Against this background, the trade surplus rose to 15.9 billion euros in April from 14 billion euros in March.

In conclusion, I would like to draw your attention to one more factor that will, albeit indirectly, contribute to the demand for risky assets. Yesterday, the managing director of the International Monetary Fund, Kristalina Georgieva, said she expects the G7 countries to provide tens of billions of dollars to fund vaccine production around the world. “I suspect that we will see this in tens of billions, not a couple of billions,” Georgieva said at the GZERO Media online event. Last month, the IMF called for a $ 50 billion spending plan to help immunize people around the world from Covid-19 and avoid a scenario in which developing economies recover much more slowly than developed countries.

As for the technical picture of the pair EURUSD, now a lot depends on how buyers behave in the resistance area of ​​1.2185. A repeated exit from this range will lead to the growth of the trading instrument to the area of ​​the maximum of 1.2215, and then to the larger area of ​​1.2250. If the pressure on the euro increases after today’s decision by the European Central Bank, the emphasis will be placed on the level of 1.2150. Its breakdown will quickly plunge EURUSD down to the 1.2100 low.