Today the European Central Bank is to publish its decision on interest rates, which are unlikely to be subject to any changes. But you shouldn’t think that this meeting is a “walk-through” session. Most likely, the President of the European Central Bank Christine Lagarde will be put under serious pressure in the hope of explaining how long the eurozone will need increased stimulus support. Even so, it is expected that the head of the ECB will not move away from his firm conviction that it is necessary to continue to buy bonds at an accelerated pace until June this year. Such methods help to maintain soft financing conditions due to which, the economy will more actively recover from the victory over the coronavirus pandemic. Most likely, Lagarde’s forecasts for the second half of that year on further stimulus measures will be very vague. 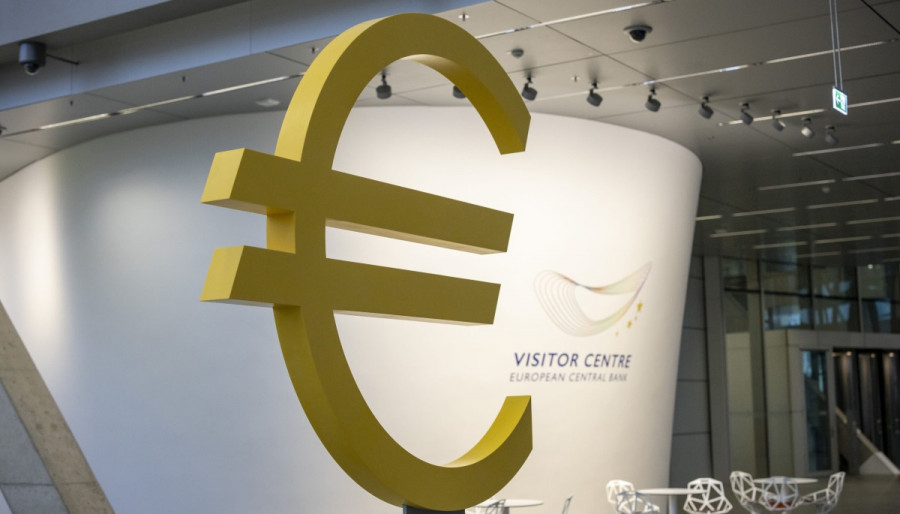 Let me remind you that some members of the European Central Bank believe that already in the third quarter of this year, the regulator needs to adjust the bond buyback program in order to prevent a sharp jump in inflation and overheating of the economy. However, it is currently far from clear how the ECB will abandon the emergency buying of bonds and return to more standard instruments. Investors also expect that during this meeting, the head of the ECB will be able to answer these questions. As for inflation, most likely the European regulator will follow the path of the US Federal Reserve System, which announced last year that it allows inflation to go beyond 2.0%, since a temporary exit from the acceptable range will not harm the economy, but vice versa – will help its growth by compensating for the losses over the past period. This is not enough for the European Central Bank, which constantly insists that rates will remain at zero levels for quite a long period of time, while planning to complete the bond buyback program in March next year.

In the meantime, it is still early enough to say that the coronavirus will be defeated in the near future, since at the moment many countries in the eurozone continue to adhere to quarantine measures, which slows down the activity of the service sector and production.

As I have repeatedly noted, until the updated forecasts for economic growth and inflation are released, and they are only expected in June this year, the European Central Bank will definitely not make hasty statements and make changes to current policies. Therefore, today one should not expect any serious surge in volatility after the publication of the report on the monetary policy of the ECB. 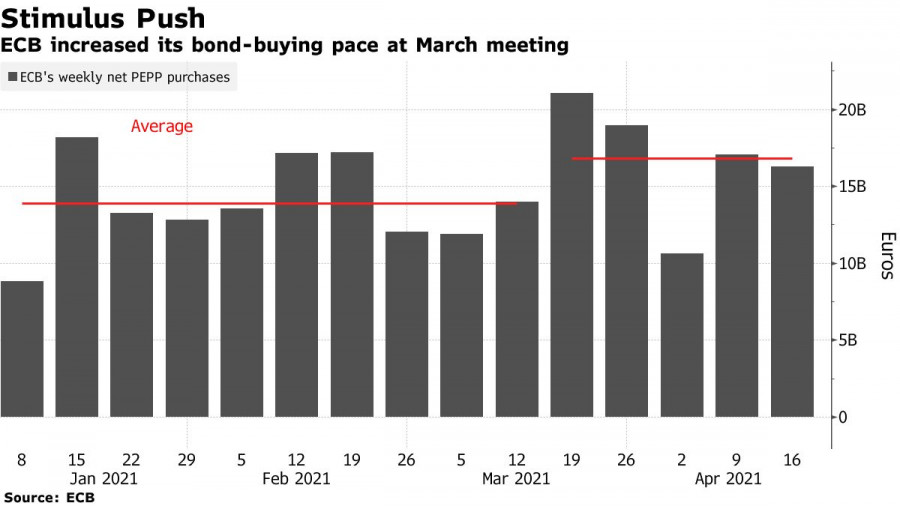 Another thing is how the regulator will continue to treat fast-track purchases of bonds as part of its emergency PEPP program in the amount of 1.85 trillion euros. The chart clearly shows that after the surge in March purchases, the ECB reduced the volume, but continues to keep the situation under control, which is holding back the growth of European bond yields. However, since its March meeting, the European Central Bank has spent an average of about 17 billion euros on bonds, up from 14 billion euros at the beginning of the year.

Meanwhile, Germany’s 10-year bond yields are about 7 basis points higher than in March at about -0.26% – while the premium that investors are demanding to buy more risky Italian debt hovers around 100 basis points. which is slightly above this year’s lows.

As for the current technical picture of the pair EURUSD, today a lot will depend on the support level of 1.2025. If the sellers of risky assets manage to push through this range, most likely the pressure on the euro will return, and we will see a repeated decline in the pair already to the support area of ​​1.1975 with the prospect of falling to a minimum of 1.1920. It will be possible to talk about the resumption of the bull market only after EURUSD confidently consolidates above the level of 1.2080, which will lead to a larger jump of the pair to the area of ​​1.2135 and 1.2180.

Yesterday, Italian authorities said they most likely will not be able to meet their goal of half a million daily vaccinations against Covid-19 by the end of this month. However, Draghi’s government is determined to dramatically accelerate the pace of the campaign thanks to an increase in shipments in May this year. The head of a vaccination company in Italy, Fabrizio Curcio, said yesterday that delays are due to supply chain difficulties, as well as problems with the vaccine from AstraZeneca, which prompted about 10% of people across the country to cancel or refuse the vaccine. … Let me remind you that the main goal of Prime Minister Mario Draghi, who chose Curcio to work, is 500,000 daily doses of the vaccine by the end of this month. Draghi is betting heavily on vaccinations as he plans to slow the spread of the infection and restart the economy.

Meanwhile, construction production in Italy rose in February this year. Construction volume rose 1.4% month-on-month in February after rising 5.0% in January, according to the statistics bureau ISTAT. On an annualized basis, the volume of construction work increased by 3.5%.

The British pound managed to regain its position, which it lost after the data from the Office for National Statistics on inflation. The report says that consumer price inflation in the UK rose in March this year, mainly due to energy. Thus, consumer prices rose 0.7% year on year, after rising 0.4% in February. Economists had expected 0.8% growth. On a monthly basis, inflation was in line with economists’ forecasts and rose to 0.3% from 0.1% a month ago. Core inflation, excluding prices for energy, food, alcoholic beverages and tobacco, rose to 1.1% from 0.9%. The observed recovery in inflation is expected to spike to 1.5% in the next few months, with a target of around 2% being reached by December this year. 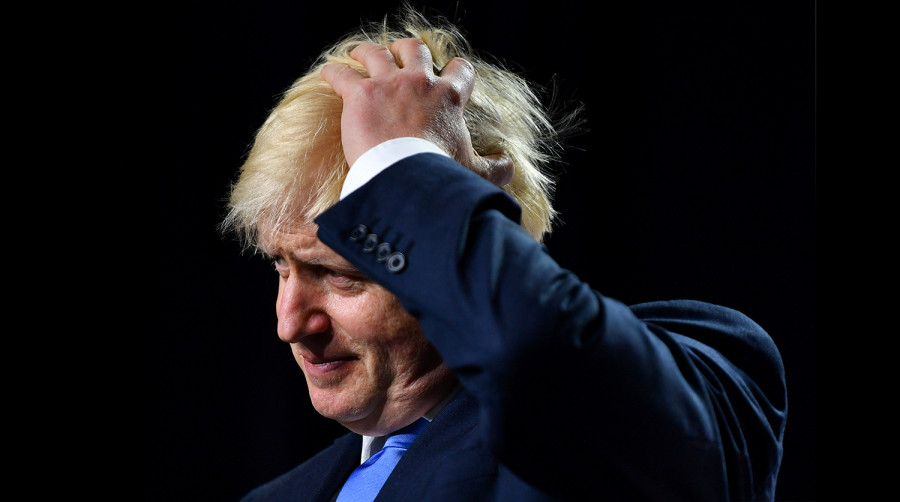 Looking at the rise in inflation, it is clear that the UK economy is gaining momentum, with real-time indicators showing that consumers are spending more and more money saved following the relaxation of quarantine measures in the country. Restaurant bookings and job postings have risen to their highest levels since the start of the coronavirus pandemic, while traffic and the number of people heading to jobs have also jumped significantly in recent weeks, according to government statistics. After the restrictions were lifted, shops and bars re-started their active work, which leads to an increase in activity in the service sector.

In a recent statement, Prime Minister Boris Johnson noted that since nearly two-thirds of the UK adult population has been immunized against the coronavirus, a gradual easing and lifting of quarantine measures is starting, which will be completely lifted by 21 June.

As for the technical picture of the pair GBPUSD, then the further direction of the pair entirely depends on the level of 1.3945, above which it was not possible to break through yesterday. Only a steady rise above this range will lead to active purchases of the trading instrument with the aim of returning to the maximum of this month in the area of ​​the 40th figure. If the pressure on the pound returns, the same area of ​​support will be the level of 1.3885, a breakthrough of which will quickly lead to a decline in GBPUSD already to the 1.3830 and 1.3790 areas.