The European Central Bank has fired its shot, it’s the Fed’s turn. Christine Lagarde managed to persuade the EURUSD bulls not to do stupid things by comparing the economies of the Eurozone and the United States. The second is recovering clearly faster than the first, and it will not be necessary to wait until 2022 for the US GDP to return to pre-pandemic levels. Divergence in economic growth is a clear “bearish” factor for the euro, but until the Fed begins to show signs of activity, fans of the main currency pair should not be confused by this circumstance will be.

At first glance, Jerome Powell and his colleagues have every reason not only to curtail QE, but to do it aggressively and start discussing the issue of raising the federal funds rate. US consumer prices spiked to 5% in May, a level not seen in the past 12 years. Core inflation has jumped to its highest levels since 1992. Just a little bit more – and the history of the 1970s will repeat itself, when the Fed fought high inflation for a long time and made a lot of efforts to bring it under control in the early 1980s.

Since then, a lot of water has flown under the bridge. The current generation of investors grew up in an environment of low inflation, thanks to which stocks and bonds were growing by leaps and bounds. Returning to the past is fraught with sales, a serious correction in US stock indices and a surge in US Treasury yields. In fact, the market does not believe that this is possible. He’s looking at the Fed, who says the CPI surge is temporary, like a rabbit to a boa constrictor. That is why, in response to a 5% spike in consumer prices, the S&P 500 hit an all-time high and 10-year debt rates plummeted to a 3-month low.

Also read  How to trade the GBP / USD currency pair on May 12?

Excessively short speculative positions on bonds, as well as the growing interest in them from Japanese and European investors due to the weakening US dollar, play a significant role in the latter process. If the closing of the shorts continues, the “American” will remain uncomfortable. At least in the short term.

Dynamics of US bond yields and speculative positions on them 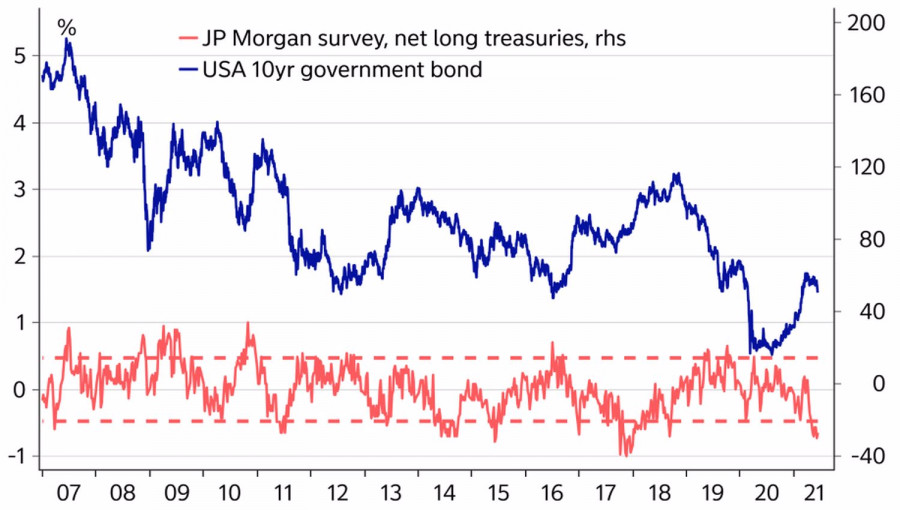 For debt rates to resume growth, either the Fed’s hawkish rhetoric, or a prolonged period of high inflation, or major improvements in the labor market are needed. Despite the fact that many FOMC members, on the eve of the June 15-16 meeting, talked about the need to start discussions on curtailing the $ 120 billion of the quantitative easing program, I personally doubt that the Central Bank will abandon the “dovish” rhetoric, which would shock the stock indices. Even if the regulator decides to start normalizing monetary policy, it will move at a snail’s pace. Not good news for the US dollar.

Technically, EURUSD is frozen in consolidation in the range of 1.21-1.222. A breakout of its upper border will be a signal for the formation of long positions with targets at 1.233 and 1.25. On the contrary, a successful test of the supports at 1.213 and 1.210 will create an excuse for short-term sales in the direction of 1.2085 and 1.2045. A rebound from these levels will provide an opportunity to buy the euro at a lower price. 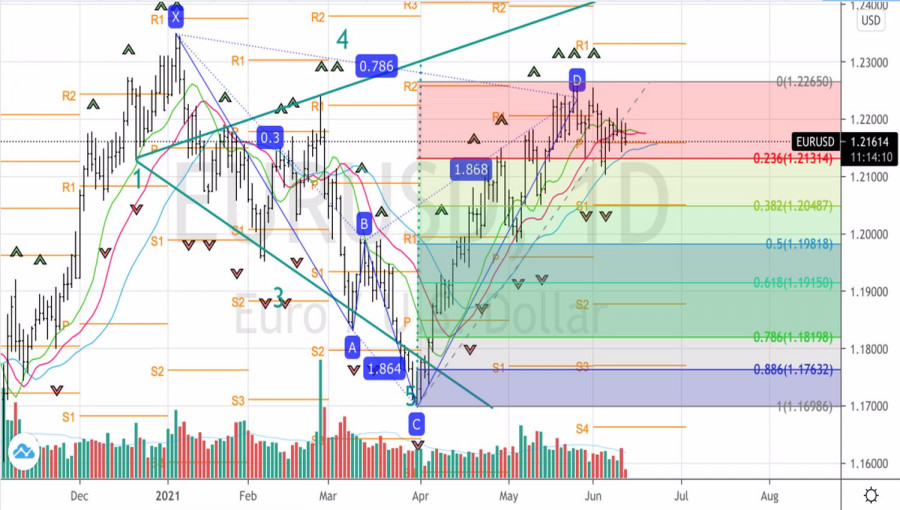