Risky assets continue to benefit from massive stimulus measures. The S&P 500 closed at a new all-time high on Friday for its sixth consecutive weekly gain. Asian and European indices are also going up.

While unprecedented stimulus measures and high vaccination rates are keeping record stocks up to date, the government’s position looks noticeably less convincing. The Treasury Foreign Capital Inflows report released Friday showed that the attractiveness of dollar-denominated assets is not as obvious as it might seem – inflows to the stock market have slowed in the last 3 reporting months (December to February), and the total position on Treasury Bonds & Notes hit a new anti-record of -685.2 billion. 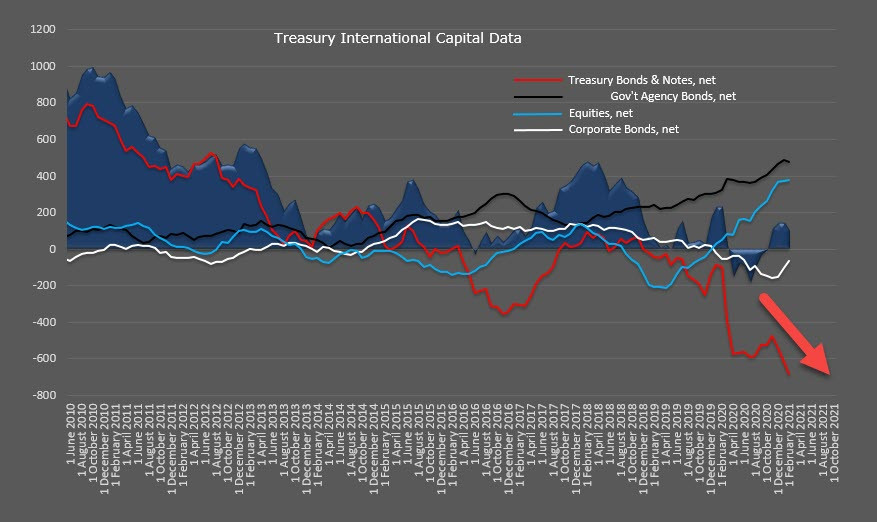 The amicable outflow of foreigners from the US GKO market may lead to a lack of liquidity, after which problems will begin with the placement of new issues.

You also need to pay attention to the CFTC report. There are also questions about it. On the one hand, the aggregate speculative position in USD against the G10 currencies continues to decline, which, it would seem, should be a bullish factor for the dollar. At the same time, this position is still not getting out of the negative zone, and the rate of shorts reduction has slowed down to almost zero. In other words, the trend in favor of the dollar is still developing, but the strength of this trend has become completely unconvincing. 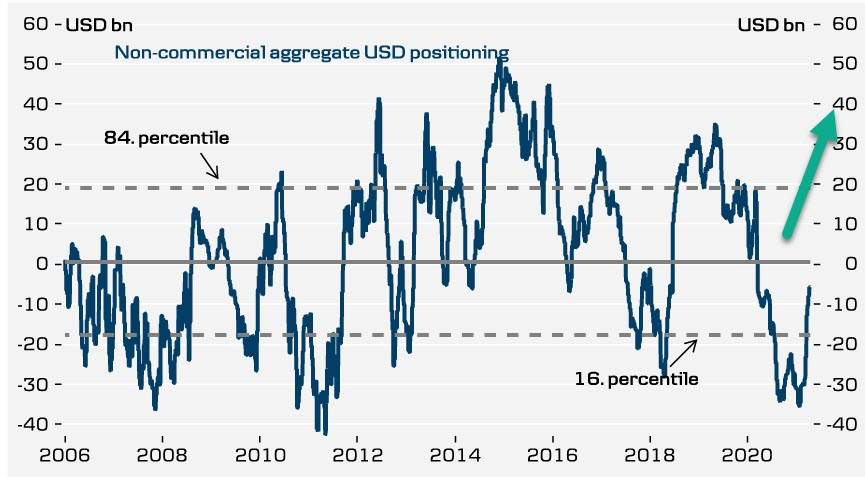 We assume that the week will be unsuccessful for the dollar, if UST yields continue to decline, then it is likely that the dollar will continue to weaken.

On April 22, a scheduled meeting of the ECB will take place, no changes in monetary policy are expected, all market attention will be directed to the PEPP asset buyback program. While the PEPP program performs one very important function – it restrains the growth of yields and does not allow the development of another debt crisis, so the likelihood that PEPP will be reduced or even announced that it will be cut in the near future is small. The Bundesbank is in favor of the immediate completion of the PEPP program, but its influence will not be enough to overcome the resistance of the countries of southern and eastern Europe.

Accordingly, the results of the ECB meeting will be for the euro, most likely, neutral with a bias in the bearish direction.

The EUR Target Price has turned upwards and is currently slightly above the long-term average. On the spot, the euro managed to move above the resistance of 1.2010, which increased the chances of a return to the bullish scenario. 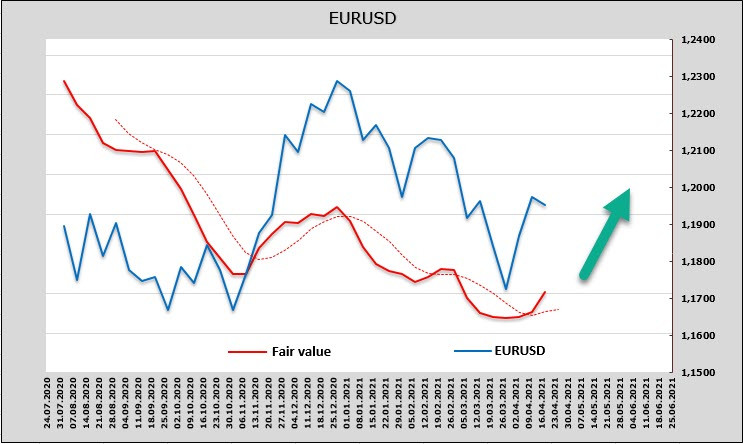 Technically, a short-term bullish impulse is developing, until the resistance of 1.2242 is overcome, it will be considered corrective. At the same time, an upward reversal of the target price indicates that perhaps new fundamental factors are coming into play, and now it is impossible to recommend selling on growth. The next resistance zone is 1.2090 / 2110, the probability of growth towards it looks high.

The coming week will be extremely busy for the pound. Already on Tuesday, the report on the labor market for March inclusive will be published, on Wednesday inflation data will be released and, in addition, the head of the Bank of England Bailey will make a speech, on Friday – the Gfk consumer confidence index and retail sales.

The estimated price of the pound, as in the case of the euro, is trying to move above the long-term average. 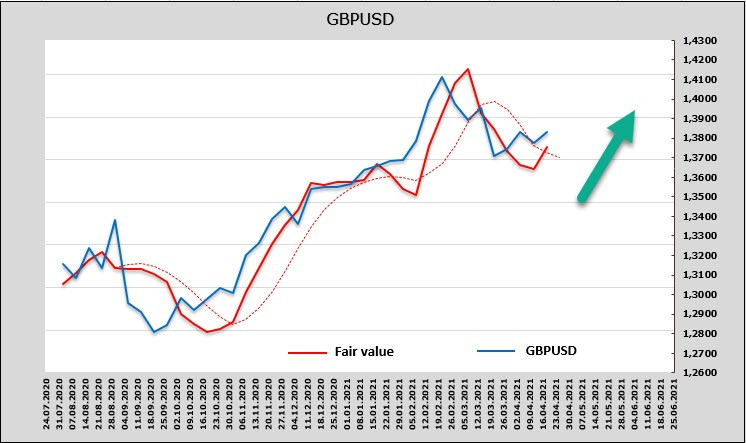 The pound now has reasons to continue its growth, since, on the one hand, the demand for risk is growing, and on the other hand, the market’s reaction to the problems with AsrtaZeneka turned out to be restrained. Brexit talks on Northern Ireland continue, Britain has requested an additional 1 month to resolve the controversy, the EU has agreed, the pound will not be under pressure from this side in the coming weeks.

We assume that the resistance at 1.3916 will fall in the near future, the next target is 1.4000 / 20, further dynamics will depend on the incoming macroeconomic data.