The European currency continues to strengthen its position, as activity in the eurozone is recovering even during the period of quarantine restrictions. The economies of different countries are gradually adapting to the prevailing conditions, and the lifting of restrictions, which is expected in the near future, will spur strong GDP growth in the second quarter of this year. Last week, the World Health Organization said coronavirus cases are on the rise in all regions except Europe. Let me remind you that the European Union plans to launch a new immunization campaign to reach a large part of its population within a few months, which only strengthens investors’ appetite for risk. The euro is up 3% from a four-month low this March and broke the key level of $ 1.20 last week, which retains good potential for further recovery in the pair. However, there are a number of points that can prevent this.

News of an accelerating US economic recovery could be a highlight this week, limiting the upside potential of risky assets. The data is likely to show that output is approaching pre-pandemic levels just in time for the Federal Reserve to release its monetary policy decision. Gross domestic product is projected to grow 6.9% year on year in the first quarter of this year, after rising 4.3% in the fourth quarter of 2020. Other reports of increased orders for durable goods, rising consumer confidence and rising American personal spending may also support the US dollar. Good progress in Covid-19 vaccinations and the lifting of a number of restrictions associated with the pandemic create more potential for further growth in US economic activity, which is projected to intensify in 2022. 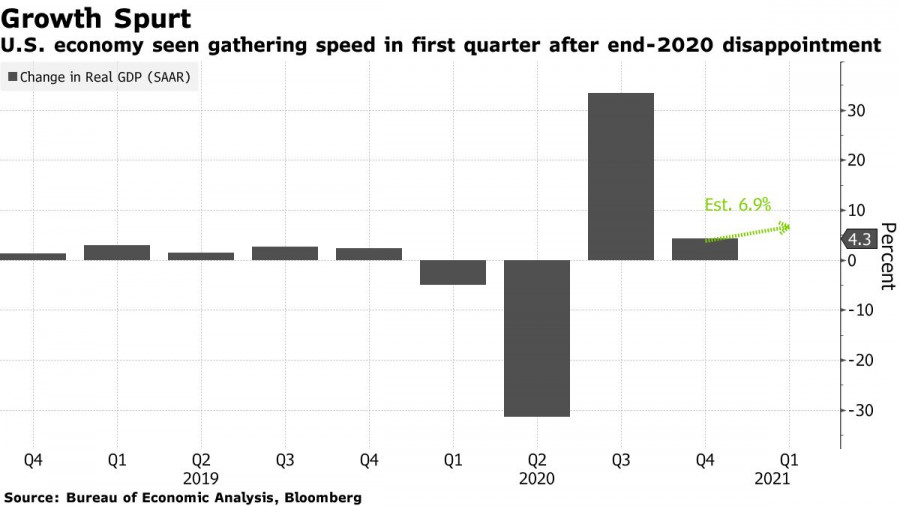 Prospects for the American dollar

On Wall Street, opinions differed on the outlook for the US dollar. Some believe that while the world seeks to break out of the detrimental economic effects of restrictions associated with the coronavirus, the United States has pulled ahead, which gives an advantage in the race for the first place who coped best with the pandemic. Combined with the Biden administration’s actions through a trillion-dollar public support program, economists are betting on a larger inflationary jump that will push US Treasury yields higher. In this regard, the trend towards strengthening of the US dollar may resume at any time. Let me remind you that the yield on 10-year US bonds rose more than 80 basis points this year to 1.77% in March, the highest since the start of the coronavirus pandemic. At the moment, the yield is at the level of 1.56%.

But not everyone is convinced that the United States will continue to outperform its competitors. Some analysts at JPMorgan believe that the US dollar’s exclusiveness will fade as other countries catch up with vaccine rollouts, leading to a resumption of economic activity in the second half of this year. The euro is expected to outperform the dollar as European countries recover over the medium term.

The fact that the pair climbed above the 20th figure tells us about the real upward potential of risky assets. However, before talking about growth in the area of ​​1.2240, it is necessary to hold above 1.2000. Given the news that awaits us this week, it is difficult to imagine how the market will react to them. Recently, things are not going as it is written in the “textbooks”. EURUSD is rising on good news in the US economy and falling after data that activity has worsened. That is why it is so important for the bulls to protect the support at 1.2090, as quite a lot will depend on it. The return to the bears’ control of this range will surely increase the pressure on risky assets, which will push EURUSD into the area of ​​the middle of last week’s sideways channel at 1.2050. Below is the level at the base of the 20th figure, a breakout of which can quickly put an end to the bull market. If the buyers manage to defend the support at 1.2090, then the emphasis will already be shifted to the data on the US economy – the reaction to which is rather difficult to predict. A break of the resistance at 1.2140 will most likely lead to a new rise in the euro to the 1.2190 and 1.2240 areas.

Regarding Friday’s reports, it is necessary to pay attention to the data on new home sales in the United States in the previous month. A Commerce Department report said new home sales rose sharply in March by 20.7% to 1.021 million year on year, after falling 16.2% in February. Economists had expected new home sales to rise 14.3% to 886,000. Despite strong demand, sales in March were unlikely to continue as the surge in house prices would weigh on the index.

The growth of activity in the American economy continued, but this provided only temporary support to the dollar. The IHS Markit report indicated that the composite PMI rose to 62.2 points in April from 59.7 points in March, while economists had expected the indicator to be at 60.5 points. It is important to note the very strong growth in activity in the service sector, where the index jumped to a maximum of 63.1 points from 60.4 points in March against the forecast of 61.6 points by economists. The gradual removal of restrictions and the vaccination program of the population allows you to achieve better results during the maintenance of the index. A reading above 50 indicates an increase in activity. The manufacturing index was slightly worse than economists’ forecasts, but also showed growth. It jumped to 60.6 points from 59.1 points in March, while economists had expected it at 60.9 points.

Also read  Forecast and trading signals for GBP / USD for May 26.

In any case, the advantage of the American economy is clearly obvious and each time it will be more difficult for buyers of the European currency to make their way to new local highs, since the more expensive the euro, the higher the chance of intervention from the European Central Bank, which is very concerned about the European currency did not interfere with economic growth.