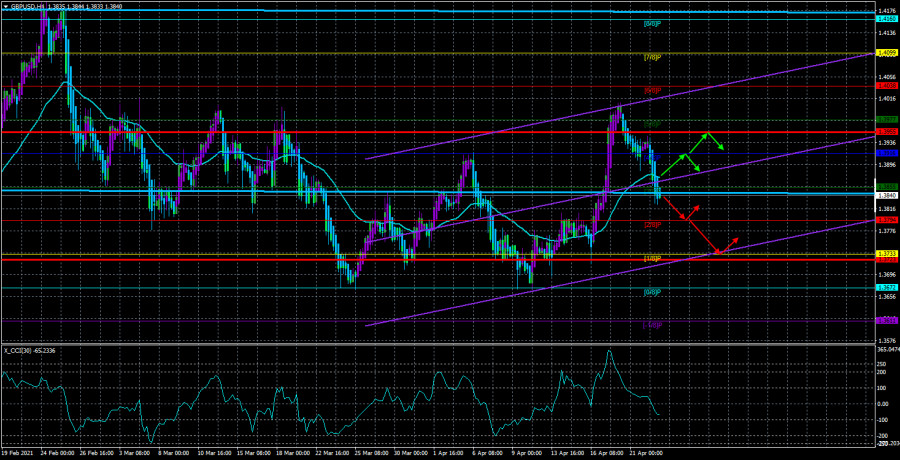 The British pound sterling has started a new round of the downward movement. At first it seemed that everything would end with a banal rollback downward and the resumption of the uptrend, but now the scales are tipping towards a new round of the downward movement within the “swing”. We have already said that the pound / dollar pair has been moving up / down in recent weeks, passing 250-300 points in each direction. And this kind of movement is quite expected for the British pound, since in the last 6-7 months it has regularly shown just such movements. Thus, with a continuing uptrend, the pair can continue to move 300 pips in different directions, which greatly complicates the trading process on the 4-hour timeframe. However, the pound has long ceased to amaze. The British currency has risen in price by more than 30 cents in total over the past year, with an absolutely disastrous fundamental background. If at first (in the first half of 2020) the growth of the pound could be explained by the fall of the American currency, since then there were “four types of crises” in the United States, then since the fall of 2021, the British pound has had no reasons for growth. We mean fundamental. Even then, the American economy began to recover at a high rate, the elections ended with the victory of Joe Biden and the Democrats, so the “toxic” Donald Trump began to retire, the social crisis caused by several racist scandals ended. But in the UK, the chaos associated with Brexit continued, the epidemic continued, the “lockdown” continued, and with all this, the pound managed to continue growing. And from 2021, the consequences of Brexit became visible, which also negatively affected and will affect the state of the British economy. And the pound sterling, even in this case, failed to correct normally, continuing to remain close to its 3-year highs near the 42nd level. In general, there are many questions about the British pound, so when the next absolutely illogical movements begin, it remains only to accept them in the form in which they are. The entire list of factors that now affect the pound sterling is expressed in only two. The first is the excessive increase in the money supply in the United States. The second is the “speculative factor” for the British pound. All other news, events and reports are practically irrelevant.

Therefore, what is happening now in Northern Ireland remains practically ignored by the markets. Although this is very strange, because we are talking about a geopolitical conflict that can turn into, if not a war, then serious and bloody clashes on the island of Ireland. Recall that the whole essence of the conflict lies in the difference in the geopolitical points of view of Catholics and Protestants living on the island. The former want the reunification of Ireland and independence from Great Britain, the latter want to remain part of the United Kingdom. Thus, with the exit of Great Britain from the European Union between the two countries, where many want to reunite with each other, a border or some kind of it should have appeared. Boris Johnson’s plan assumed that there would be no border in the physical sense of the word. That is, of course, there will be certain customs points, passport control, inspections and checks, but all this will take place in special places, and the formal border will generally run along the sea. That is, there seems to be a border, but for the population of the island of Ireland it seems to be not there. However, once the UK finally left the EU, it became clear that what looked great on paper is very poorly implemented in real life. In addition, the life of Northern Ireland largely depends not only on Great Britain, but also on its “southern sister”. Now the situation has developed that Ireland remained in the EU, while Northern Ireland left the European Union, which closes the latter’s access to the market of the former. And all this is accompanied by a pandemic, an economic crisis. In addition, Scotland adds fuel to the fire, which is not going to put up with life outside the EU and intends to leave the Kingdom in the next 2.5 years. Therefore, many in Northern Ireland, especially people under 45, are also thinking about a possible referendum and secession from Britain. So far, they are not the majority. According to various estimates, 40-45% of the total population. However, over time, their number can grow. Recall that in 2016, 52% of UK residents voted in favor of leaving the EU. 48% wanted to stay in the EU. Thus, potentially London now has two more very serious problems that can turn into irreversible consequences in the coming years. It is hardly worth saying what the loss is by Great Britain of its own territories in the form of Scotland or Northern Ireland. Needless to say, the outbreak of a new conflict on the island of Ireland could turn into bloody battles for many years and even decades. And it is hardly worth saying that all these events will not increase the level of Britain’s international reputation and improve its economic position.

The pound / dollar pair ignores all these data and events for the time being and prefers to trade in the “swing” mode. Therefore, while you can not pay attention to all the events in Scotland, Ireland, Northern Ireland and even the UK itself. But it should be remembered that sooner or later the markets may “remember” about them. And this can provoke a sell-off of the British currency and a drop in the investment attractiveness of Great Britain in the eyes of international investors. 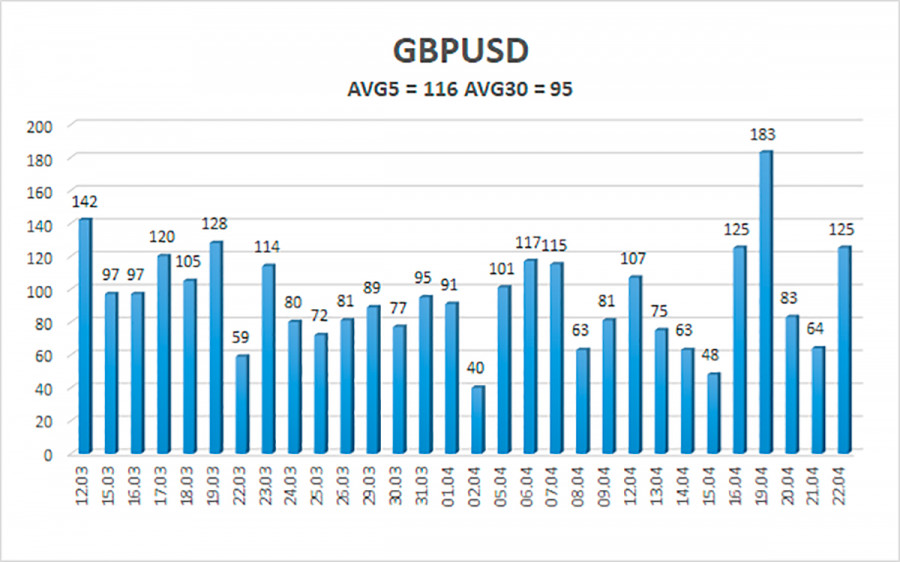 The average volatility of the GBP / USD pair is currently 116 pips per day. For the pound / dollar pair, this value is “high”. On Friday, April 23rd, therefore, we expect movement within the channel, limited by the levels of 1.3723 and 1.3955. An upward reversal of the Heiken Ashi indicator may signal a turn of an upward movement within the “swing”.

Also read  The US economy is at its peak

The GBP / USD pair on the 4-hour timeframe has started a downward movement. Thus, today it is recommended to stay in short positions with targets at 1.3794 and 1.3733 until the Heiken Ashi indicator turns up. Buy orders should be opened in case of overcoming movings with targets at 1.3916 and 1.3955 and keep them open until the Heiken Ashi indicator turns down.

Forecast and trading signals for the EUR / USD pair for April 23.

Forecast and trading signals for the GBP / USD pair for April 23.