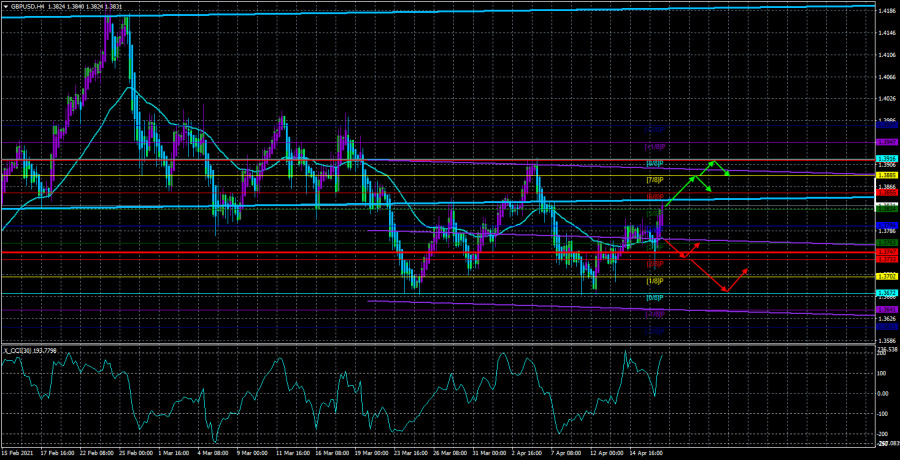 The British pound sterling on Friday continued to trade in a “swing” mode, which began again in recent weeks. In general, the movement of the pound / dollar pair now looks like this: 250 points up, the same amount down. There is a minimal bias, but it is really minimal. Globally, the downward correction persists, but it is very weak. Thus, the pound continues to trade, violating all laws of logic. There is still no fundamental reason for the British currency to be so high. And given the recent events on the island of Ireland, as well as the approaching May 6, when elections to the local Parliament will be held in Scotland, in which the Scottish National Party will strengthen its strength with a 90% probability, the pound sterling should already fall. But the “speculative factor” and the factor of pumping the American economy with money are doing their “dirty business.” And despite the complete lack of grounds for such an expensive British pound, this particular currency continues to feel just fine, despite Brexit, three lockdowns, slow economic recovery, the possible loss of Scotland and riots on the island of Ireland.

Meanwhile, unrest continues in Northern Ireland. Clashes with the police, mass protests, car arson. Recall that the essence of the conflict stretches back to the 19th century and it lies in the status of Ireland and Northern Ireland. There are a sufficient number of political forces in the countries that hold different opinions. The Northern Ireland Unionists believe that it should remain a part of Great Britain. Loyalists are in favor of unification with Ireland, but it is clear that the Irish and Northern Irish do not want a border or any kind of border between their states. But since the European Union and Britain are now on opposite sides of the barricades, it cannot do without a border between them. And, recall, Ireland is not part of Britain, but it is part of the EU …

Also read  The rise in interest rates is just around the corner !!!

At the same time, everyone in Scotland is gearing up for arguably one of the most important elections in decades. The fact is that at the moment the ruling party is the Scottish National Party, headed by the current first minister, Nicola Sturgeon. The SNP last Thursday officially pledged to hold a new independence referendum within the next 2.5 years if it wins the May 6 elections. “If, after the elections in the Scottish Parliament, it is possible to form a simple majority for a referendum on independence, then Boris Johnson or anyone in London will have no democratic, electoral or moral justification to deprive the people of Scotland of the right to determine their future on their own,” said SNP leader Nicola Sturgeon, presenting the party manifesto last week. Thus, elections to the Scottish parliament will be “British type”. We mean that the Scottish people will have to make a choice not only in favor of one party or another but also in favor of whether they want a new referendum or not. Recall that in December 2019, early parliamentary elections in the UK made the same sense.

In fact, then the question was decided not about whether Labor or Conservatives will lead the country in the coming years, but whether the British want to resolve the issue with Brexit as soon as possible, with the Brexit agreement and complete the three-year “Santa Barbara”? Then the majority of Britons voted for Boris Johnson’s party and Brexit was all-so brought to an end. Now the same will happen in Scotland. If the SNP wins, it would mean that the majority of Scots are in favor of a new independence referendum. Recall that in 2016, the majority of Scots voted against leaving the EU, and in 2014 – for retaining membership in the UK. “At stake is the near and distant future not only of Scotland but of the entire United Kingdom.

Also read  Plan for the American session on April 27 (analysis of morning deals). Bears are protecting resistance at 1.3892, forming

Therefore, when I say that this is the most important election I have participated in, I am absolutely serious, ”said Douglas Ross, a spokesman for the SNP. However, we would like to remind you that Scotland, as an autonomous republic, is required to obtain official permission from London in order to hold a referendum. Boris Johnson flatly refuses to grant Edinburgh such a right. And if in 2024 the Conservatives and Johnson win the elections in Britain again, he will not be in the next 4 years. The First Minister of Scotland, Nicola Sturgeon, said that she is not going to follow the path of Catalonia and wants to achieve independence from London either by winning the elections or through the courts. It should also be noted that Scotland has a rather complex electoral system.

According to forecasts of political scientists, the SNP and the Green Party may get together 73 out of 129 seats. At the moment, the SNP has 61 mandates out of 129, but it still rules the country thanks to a coalition with the same “greens”. By and large, the question of the upcoming elections is whether the so-called separatists will be able to form a majority in Parliament or not? Sturgeon’s party, of course, wants to have enough mandates for the full independence of its party, neither from the Greens nor from other supporters of Scottish independence. However, if something happens, a coalition is also a good option. It should also be noted that among the Scots themselves, those who favor independence from Britain have an advantage, but their advantage is minimal only a few percent. 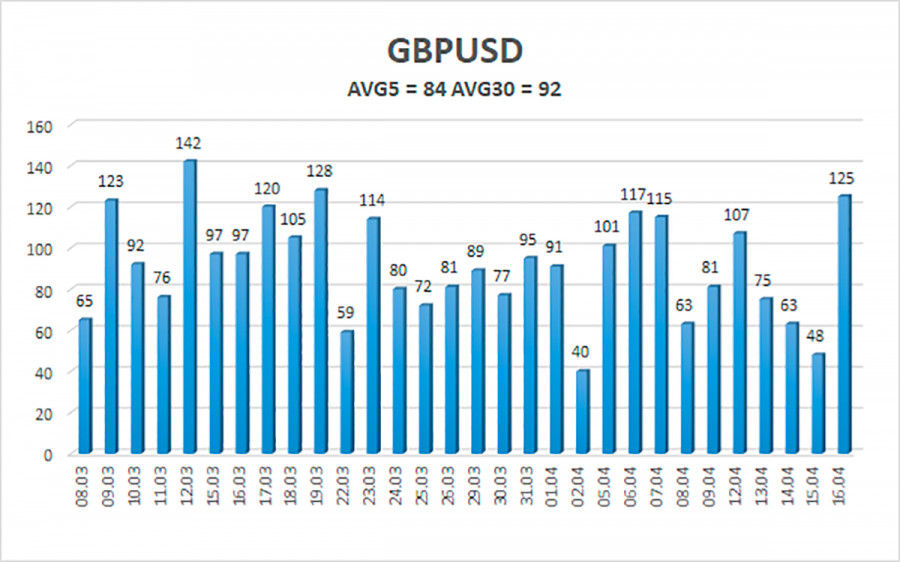 The average volatility of the GBP / USD pair is currently 84 pips per day. For the pound/dollar pair, this value is “average”. On Monday, April 19, therefore, we expect movement within the channel, limited by the levels of 1.3747 and 1.3915. A reversal of the Heiken Ashi indicator back down may signal a new round of downward movement.

The GBP / USD pair on the 4-hour timeframe has begun a new round of upward movement. Thus, today it is recommended to stay in buy orders with targets at 1.3885 and 1.3915 until the Heiken Ashi indicator turns down. Sell ​​orders should be opened in case of overcoming the movements with the targets of 1.3733 and 1.3672 and keep them open until the Heiken Ashi indicator turns upward.

Overview of the EUR / USD pair. April 19th. European problems with vaccination and recovery do not worry the euro too much.

Forecast and trading signals for the EUR / USD pair for April 19.

Forecast and trading signals for the GBP / USD pair for April 19.