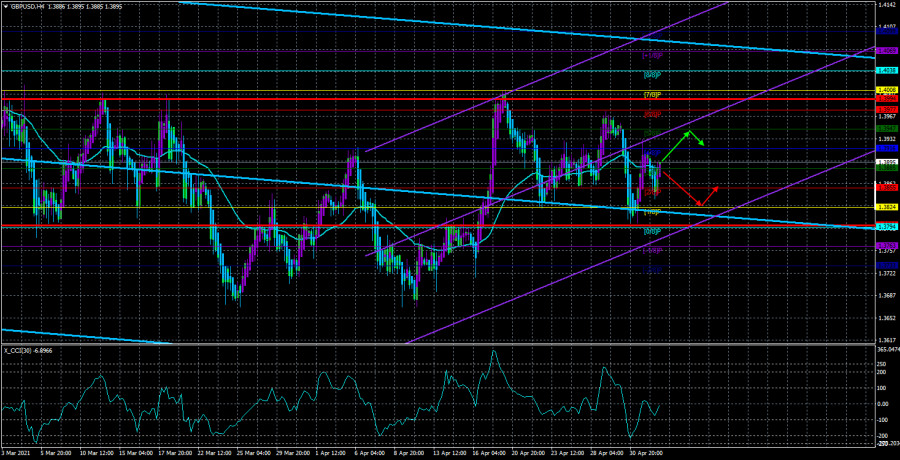 The British pound sterling continued trading in a swing mode on Tuesday. This can be seen already on all timeframes, with the exception, perhaps, of the lowest ones. On the 4-hour timeframe, the euro / dollar and pound / dollar pairs have been trading almost synchronously in recent days, but if in the case of the euro this movement is easily explained technically, then in the case of the pound, how can the “swing” be explained? Thus, if nothing has changed in the euro currency lately, then in the pound sterling – even more so. On Tuesday, the pair resumed its downward movement, as we had predicted. However, in the case of the pound sterling, the grounds for a new downward hike were different. The fact is that each turn of the “swing” takes about 250-300 points, so we expect a decline to the area of ​​the 37th level. It should also be noted that despite the swing mode, the pair may well resume the uptrend. For example, the last turn of the uptrend, which took 5 months, also took place in the “swing” mode. That is, the pair could go 200 points up and roll back 180 down, then gain 250 and immediately correct by 200. Thus, there was a trend, but there were also constant strong pullbacks and corrections. Fundamentally, nothing changes for the pound sterling either. The “speculative factor” and the factor of pumping the American economy with trillions of dollars remain key. It is these factors that continue to keep the British currency so high.

There are two important events for the UK this week. We say “for the UK” because it is far from certain that the British pound will react to these events. The first thing that is called lies on the surface. This is a meeting of the Bank of England and its results. However, if the meetings of the Fed and the ECB could be called passing, then the meeting of the Bank of England and even more so. While certain traders were expecting hints from the Fed to end the quantitative stimulus program, no one expects anything from the Bank of England. Moreover, Chairman Andrew Bailey is not even scheduled to speak on May 6. Thus, most likely, on Thursday, the results will be simply announced in the form of the absence of any changes in monetary policy, which is where it all ends. Perhaps, at least something interesting will be contained in the accompanying statement of the BA on monetary policy, but, most likely, there will be “old arguments” and wording there as well. By the way, on the eve of this event, I would like to remind traders that a few months ago rumors were actively circulated that BA could go for a new cut in the key rate, which would bring it to a negative level. Andrew Bailey and other BA representatives spoke about the negative rate back in 2020. Then it was said that the regulator is actively studying this issue, studying the experience of central banks that have already resorted to this tool, and it was also stated that it may take about 6 months to prepare commercial banks for negative rates. In recent months, Bailey and other representatives of the BA have been silent, like partisans, on this issue, which provokes a question already here: the Bank of England refused to introduce a negative rate or is it continuing to prepare and announce it unexpectedly?

Also read  The ECB did not live up to the "hawkish" hopes, but the euro is on the defensive

Well, in addition to the BA meeting, elections to the Scottish Parliament will also take place this week. Recall that this issue is also important for the UK, its geopolitical position and economy, like Brexit in its time. In fact, all questions boil down to one thing. Will the party of Nicola Sturgeon, the first minister of Scotland, strengthen its position in Parliament and get all power into its own hands? If the majority of deputy mandates go to her party members, then she will be able to make any decisions without looking at the opposition. Like Boris Johnson is in the UK now. And if Sturgeon can not be afraid of the opposition, then with a probability of 100% he will continue to put pressure on London in the matter of holding a second referendum on independence in the coming years. It is still very difficult to understand exactly how Sturgeon is going to obtain official permission from Boris Johnson, if he refused Edinburgh several times and openly declared that the issue of independence could be raised once a generation. However, Sturgeon officially promised in her campaign program that if her party wins, Scotland will leave the UK by the end of 2023. Thus, the May 6 elections will also be designed to answer the question, do the Scots themselves want to leave the United Kingdom, especially now, when the entire Kingdom is just beginning to move away from the consequences of Brexit and the pandemic? In any case, on Friday, it will be possible to draw more or less unequivocal conclusions on this issue.

As we said above, both of these important events may not have any impact on the pound / dollar pair. Or render, but local. Therefore, from a fundamental point of view, from a technical point of view, it is now extremely difficult to imagine what awaits the pair in the future. On the one hand, over the past year, the pound sterling has reached its peak values ​​and is very overbought. On the other hand, the factor of pumping the American economy with trillions of dollars and the weakness of the bears do not allow the formation of even a correction commensurate with the upward trend. Thus, we believe that the “swing” will continue in the near future.

Also read  Everything turned out to be much worse than expected, with the exception of speculative operations on EURUSD and GBPUSD 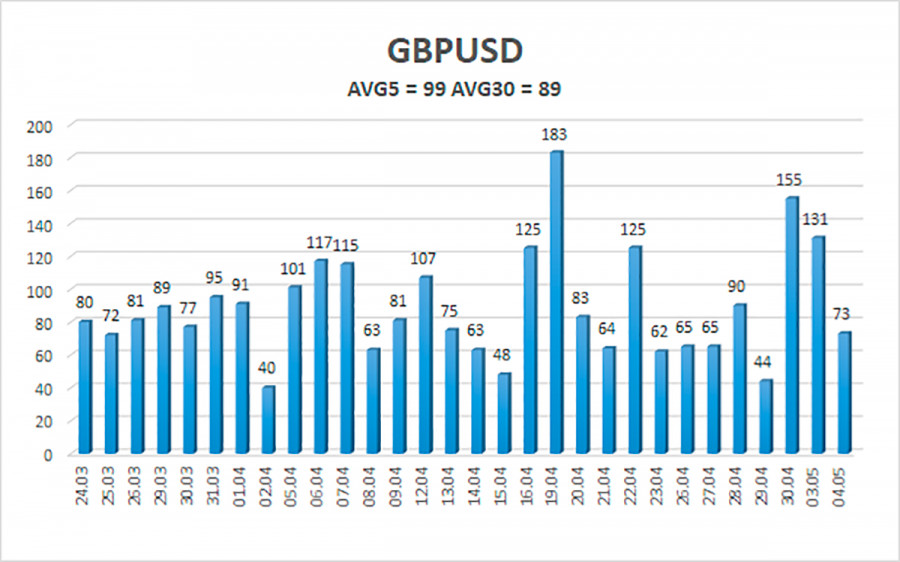 The average volatility of the GBP / USD pair is currently 99 pips per day. For the pound / dollar pair, this value is “average”. On Wednesday, May 5, therefore, we expect movement within the channel, limited by the levels of 1.3796 and 1.3994. A downward reversal of the Heiken Ashi indicator may signal a new round of downward movement within the “swing”.

The GBP / USD pair on the 4-hour timeframe has started a new round of upward movement. Thus, today it is recommended to trade upward with the targets of 1.3947 and 1.3977, until the Heiken Ashi indicator turns down. Sell ​​orders should be opened in case the price fixes below the moving average with the targets of 1.3855 and 1.3824 and keep them open until the Heiken Ashi indicator turns up. Also, taking into account the persisting “swing”, it would not be the worst decision to refrain from trading the pair for a while.

Overview of the EUR / USD pair. 5 May. Nothing changes for the European currency. After the downward correction, we expect new growth against the dollar.

Forecast and trading signals for the EUR / USD pair for May 5.

Forecast and trading signals for the GBP / USD pair for May 5.