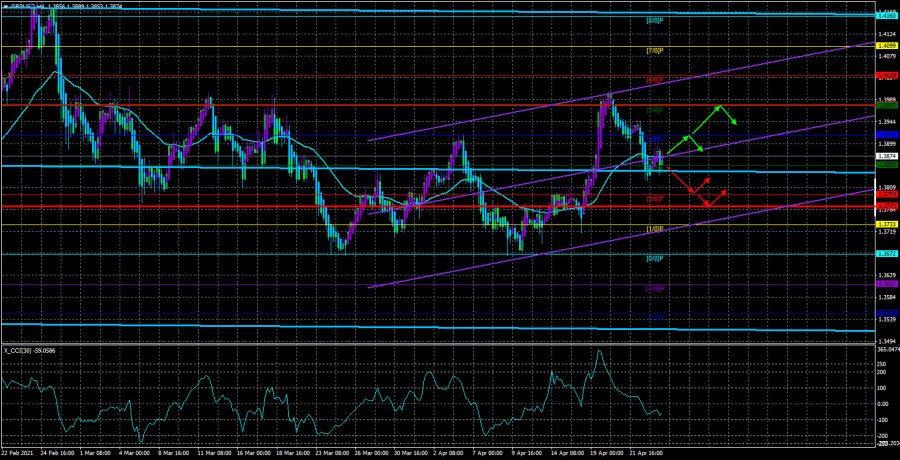 The British pound sterling has been declining for most of the past week, in contrast to the European currency. This proves once again the fact that there is no correlation between the two major currency pairs now. This means that the factors that influence the movement of both pairs are now different. We have already said that the pound sterling has a “speculative factor”, which continues to help this currency to keep very high. However, there is also a “swing” mode, which does not yet allow the pair to show a clear trend. The pair continues to alternate segments of 200-300 points up and down, however, it does so now without a definite direction of movement. Thus, first of all, we expect from the pair in the new week just such a movement. Consequently, the pair may go down to the 37th level area. This is with regard to the technical picture.

Now let’s talk about the “foundation”. The latest macroeconomic data show that economic activity in the UK is growing at the highest rates, and retail sales rose by the end of March at a record value in the last 9 months. However, this fact should not mislead traders, because in the States the economy is also growing at the highest rates, only the dollar against the euro has been falling for almost a month. And given that the positive statistics from Foggy Albion came just last week, when the pound was mainly falling, we can conclude that statistics are not a reason for buying the British currency. The Bank of England expects the economy to recover at a record pace in 2021, but it should not be forgotten that this economy fell at a record pace in 2020. At a time when the pound sterling was doing just fine. On the other hand, the UK national debt also increased by the end of the 2020 fiscal year, which ended in March. According to official figures, debt has grown at a record value since 1947, when such statistics began to be kept. For all of 2020, the public sector borrowed £ 303 billion, up from just £ 57 billion a year earlier. In general, the statistics are contradictory and no longer provide any support to the pound sterling. And he doesn’t need her now.

Far more important factors are now being ignored by the markets. Today – April 26, and already on May 6, elections to the local Parliament will be held in Scotland, which, according to experts, will be won by the party of Nikola Sturgeon, who is the current First Minister of the country. Moreover, the victory will be loud, and it will allow the Scottish National Party to form a majority government. Nicola Sturgeon promised not just from the department, but through the official election program that Scotland would receive the right to hold a new referendum on independence and leave the United Kingdom by the end of 2023 at the most. Thus, this threatens big problems for London, which so far refuses to grant official permission to hold the referendum, but Edinburgh, after all, most likely has a trump card up its sleeve. Nicola Sturgeon cannot but understand that such loud promises are not scattered left and right. Accordingly, it has some kind of clear plan. But opinion polls show that the majority of Scots in the referendum will vote to leave the UK. Their preponderance will be small, but in the 2016 referendum, the preponderance was minimal. Thus, for now, everything is moving towards the fact that over the next few years the UK will lose its territories, and at the same time a “piece” of the economy.

Also read  Plan for the European session on June 15. Commitment of Traders COT reports (analysis of yesterday's deals). The pound may start

Well, there is nothing to say about Northern Ireland. This has been a major stumbling block for the past 4 years. However, not once in the country itself was there any mood to secede from Britain. But now there are. According to the latest polls conducted among Irish and Northern Irish people, most of them are inclined to believe that Northern Ireland will also leave the UK within the next 25 years. And here lies a very interesting idea. If Boris Johnson says the UK will be much better off outside the EU, why aren’t the Irish and Scots happy about it? If life in the whole of Great Britain gets better (which is still very controversial), why are two countries out of a possible three and only four intending to leave the Kingdom? All these reflections suggest that the future of Great Britain is rather hazy, like the weather in the Kingdom itself. And the fog is now really impenetrable.

This week, traders’ attention should be drawn by the publication of US GDP for the first quarter, as well as the Fed meeting, its results and a press conference with Jerome Powell. No major events are scheduled in the UK. However, most likely, the pound / dollar pair will continue to move according to its own laws and rules. 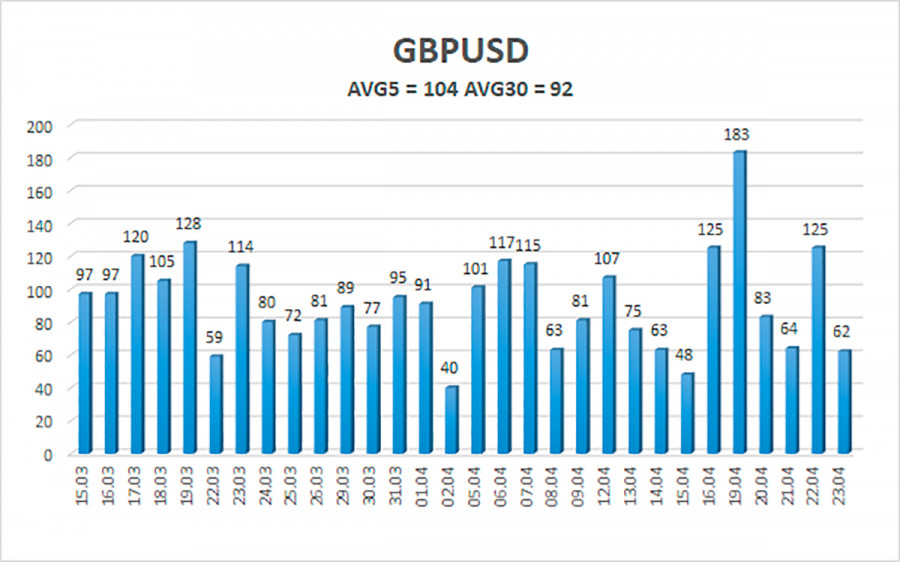 The average volatility of the GBP / USD pair is currently 104 pips per day. For the pound / dollar pair, this value is “high”. Thus, on Monday, April 26, we expect movement within the channel, limited by the levels of 1.3770 and 1.3978. An upward reversal of the Heiken Ashi indicator may signal a turn of an upward movement within the “swing”.

The GBP / USD pair on the 4-hour timeframe has started a downward movement. Thus, today it is recommended to stay in short positions with targets at 1.3794 and 1.3770 until the Heiken Ashi indicator turns up. Buy orders should be opened in case of overcoming movings with targets at 1.3916 and 1.3977 and keep them open until the Heiken Ashi indicator turns down.

Overview of the EUR / USD pair. 26 April. The “era of the European currency” has begun.

Forecast and trading signals for the EUR / USD pair for April 26.

Forecast and trading signals for the GBP / USD pair for April 26.