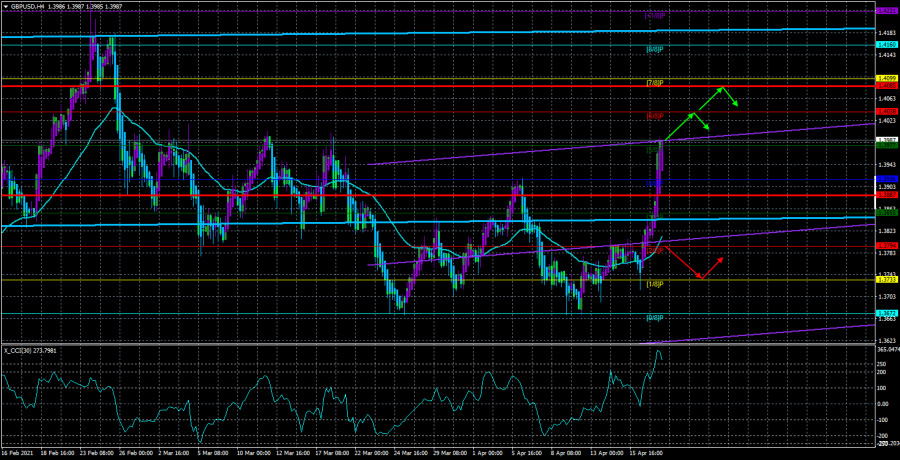 The British pound sterling also appreciated against the US currency on Monday. We have already figured out the reasons, or rather one reason, for the fall of the American currency in the article on the euro / dollar. However, there are also differences in the movements of the euro / dollar and pound / dollar pairs, which we would like to talk about once again. First, the European currency paired with the US dollar nevertheless corrected more or less decently in 2021. The correction lasted three months and amounted to about 38.2% of the entire uptrend. In the case of the British pound, the correction lasted for a month and a half and amounted to 38.2% only from the last round of the upward movement. That is, the pound has corrected much less than the dollar. Secondly, the pound sterling has grown over the past year much stronger than the euro. The pound gained from a low to a high of 27 cents, while the euro added only 17. Of course, this can be attributed to the difference in volatility of the two main instruments. In part, this is true. Third, the fundamentals in the UK remain very weak, if not disastrous. Almost several times a week we review the new negative that comes from Foggy Albion. Even if not all of this news is important and not everyone wants to be worked out by market participants, it still cannot be that the entire fundamental background is simply ignored. The pound sterling has fallen 27-34 cents in 4 years when the UK was in Brexit implementation status. In 2020, the pair is up 27 cents for no clear reason. Yes, there were certain reasons, in the United States. Then a racist crisis, a political crisis, an economic crisis, an epidemiological crisis was raging in the States. Formally, there were fundamental reasons for the dollar sell-off. However, at the same time, there were economic and epidemiological crises in Britain. Thus, it is unlikely that the Black Lives Matter movement and the absurd behavior of Donald Trump were the reasons for the collapse of the American currency in 2020.

Thus, we can only draw the same conclusion as for the euro currency: the pound sterling is falling due to a strong increase in the money supply in the United States, which causes an imbalance in the foreign exchange market, which leads to a depreciation of the dollar. Thus, large, professional, commercial and non-commercial traders even, one might say, do not have much to do with what is happening in the market. The dollar is getting cheaper simply because its quantity is increasing. But in the case of the pound sterling, there is one more factor that has a direct impact on the exchange rate formation. This factor is “speculative”. For unknown reasons, most traders decided that it was the pound sterling that deserved to be bought and by no means got rid of it. This market desire is so great that the pound could not even correct itself against the global uptrend. That is, not only is the money supply in the United States growing and will continue to do so in 2021, but also market participants do not want to get rid of the pound sterling! What then remains for the British currency? Only grow. After an absolutely formal correction, which was observed in the last month and a half, the pound again shows a serious desire to continue its march to the North. How else can one explain the drop in quotations of the US dollar from the very morning on Monday, despite the fact that no statistics were published, there were no speeches by Jerome Powell or Joe Biden, there was no important news at all. Well, not because of bitcoin, the US dollar fell!

Technically speaking, the “swing” movement remains on the 4-hour timeframe for the pound / dollar pair. In principle, this is perfectly visible with the naked eye. We have already said in the last article that the pair alternates between ascending and descending sections of 250-300 points in length. At least this has been the case in recent weeks. Now, when the US dollar is ready for a new long-term fall, this type of movement can be leveled, and instead a more logical type for the trend will appear. For example, standard: impulse growth – correction. However, let us remind you that at the end of last year the pound sterling, being in its five-month cycle of the upward movement on the 4-hour timeframe, moved like this in a “swing”. Thus, it is quite possible that even now the global uptrend on the 4-hour timeframe will look like a “swing”.

At the end of the article, we would like to remind you that at this time the fundamental background for the British pound remains as negative as it was before. Economic problems are multiplied by geopolitical ones and the result is an informational mess, the essence of which is simple – in Great Britain already everything is not very good and it was not very good in the last 4 years, and maybe even worse in the following years. Of course, Boris Johnson promises the British manna from heaven, but what ruler does not do the same? In fact, over the next two years, Scotland can achieve by hook or by crook a referendum on independence and can help it in this … The European Union, to which Edinburgh and the majority of Scots want to return. The European Union supports the idea of ​​Nikola Sturgeon to return the country to the alliance, because it is beneficial to it. As beneficial to Scotland itself. Therefore, the European Union can even exert some pressure on London, and there are plenty of levers. It should be recalled that the trade agreement between London and Brussels looks like a draft in the end. The main provisions are defined in it, but a huge number of issues remain that are not regulated in any way. As a result, already in the first months of the “post-Brexit period” in Britain there were a lot of claims against the European Union. In the future, they can only become more. Well, the conflict in the acute Ireland can only flare up more strongly, further aggravating the situation. 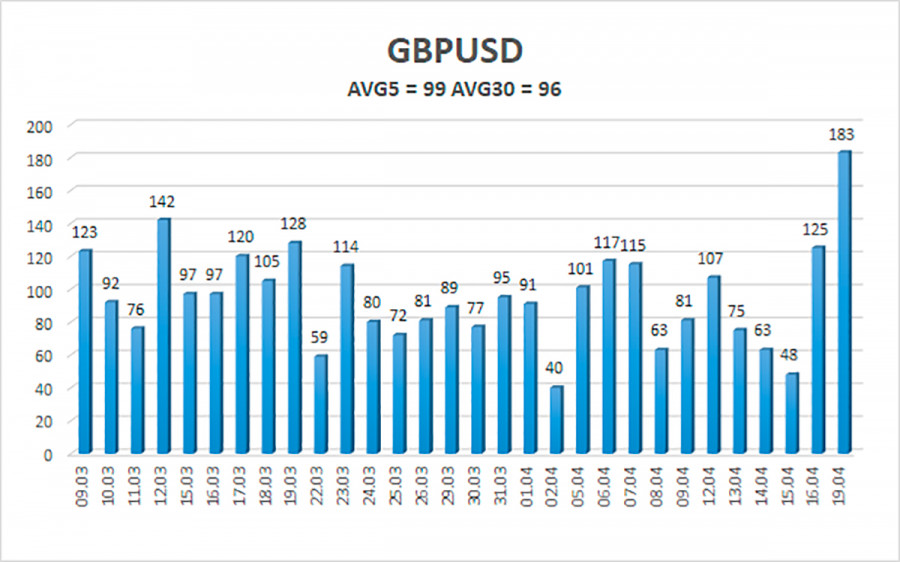 The average volatility of the GBP / USD pair is currently 99 pips per day. For the pound / dollar pair, this value is “average”. On Tuesday, April 20, therefore, we expect movement within the channel, limited by the levels of 1.3887 and 1.4085. A downward reversal of the Heiken Ashi indicator may signal a downward correction.

The GBP / USD pair on the 4-hour timeframe has started a new round of upward movement. Thus, today it is recommended to stay in buy orders with targets at 1.4038 and 1.4085 until the Heiken Ashi indicator turns down. Sell ​​orders should be opened in case of breaking the movable with the target of 1.3733 and keep them open until the Heiken Ashi indicator turns upward.

Overview of the EUR / USD pair. 20 April. US dollar knocked out. The money supply in the United States continues to grow.

Forecast and trading signals for the EUR / USD pair for April 20.

Forecast and trading signals for the GBP / USD pair for April 20.