Based on the growth rate of consumer prices and heightened inflationary expectations, the Bank of Russia Board of Directors decided to raise the key rate by 50 points at once to the level of 5.00% per annum. The Bank of Russia inflation forecast for 2021 was also raised to 4.7-5.2%. According to the head of the bank Elvira Nabiullina, inflation is significantly higher than the key parameter of 4% on an annualized basis, which requires the normalization of monetary policy earlier than previously planned. In this regard, it was decided to sharply increase the rate.

I will not reflect on the impact of this decision on the economy, whether it was right or not, let’s think about purely practical things, and consider how the rate hike will affect the Russian ruble and its exchange rate against the US dollar.

Despite the tense geopolitical situation, the Bank of Russia, perhaps for the first time in modern history, did not allow the ruble to devalue, and perhaps this was a consequence of the policy that the bank is going to pursue this year, namely, to stabilize the exchange rate and prevent its significant volatility.

In general, you and I must understand that the Central Bank is not stupid, at least their analytical reports, which I had to read, were carried out with the highest degree of professionalism. In this regard, I have no doubts that if the Bank of Russia previously allowed the devaluation of the ruble, it was a political decision, and not an initiative or inaction of a group of officials. You can say as much as you like that the Bank of Russia is acting at the behest of the IMF or the Washington Regional Committee, but the latest recommendations given by the IMF mission, the Ministry of Finance and the Bank of Russia were openly sabotaging, increasing macroeconomic indicators to the detriment of consumer activity.

According to the Black Rock investment corporation, Russia has the highest degree of solvency among developing countries, ahead of China and Saudi Arabia, among others. Such recognition of the merits of the Russian government and the Central Bank is expensive.

However, I will not give compliments to the Ministry of Finance and the Central Bank, there are also plenty of complaints against them, including from investors. After the ruble exchange rate and the Russian market collapsed in March 2020, I personally decided for myself to divide assets into two equal parts in rubles and foreign currency, achieve currency neutrality and make money on the growth of stock prices, bond funds, and not speculate on the rate. As subsequent events showed, in general, such a decision turned out to be correct, but not everything is so simple.

By constantly dropping the ruble exchange rate in response to any problem, the Central Bank has formed expectations among the population, which has become accustomed to the fact that the ruble is always a whipping boy and can be sold at any rate, since the dollar will soon become even more expensive. We were able to make sure that this is not the case during the outgoing week, when the ruble rate failed to overcome the level of 77.50 per dollar. This happened due to the fact that someone with huge reserves was selling dollars and dropping the rate of the American currency, at the end of each trading session, do not let the rate of the American currency rise.

The sanctions imposed by the United States against the Russian government debt could not cause significant damage, and could not do it. Moreover, this became obvious in the very first days, and in the administration of President Biden they started talking about tougher sanctions. The problem of the United States and the calmness of the Russian authorities is that Russia has a minimum level of public debt, about 15%, in which American holders have about 5% of the total values, and all other non-residents have about 20%, which is not a significant obstacle to the functioning of the economy. … Russia, thank God, no longer depends on whether overseas financiers lend it or not. Even if the United States prohibits, under pain of dire sanctions, the purchase of Russian debts to all foreigners and non-residents, this will not have a significant impact on the economy, although it will certainly make it somewhat difficult to finance it in the short term.

Once again I want to convey to the reader my idea that the problem of the devaluation of the Russian ruble is not economic, but political, and policy can change much faster than the economy. As a matter of fact, the Bank of Russia had all the necessary resources in order not to devalue the ruble in 2020, but amid pandemic uncertainty, geopolitical tensions, and falling energy prices, it decided to take the path of another depreciation of the national currency, and I don’t think it was done without a decision taken in the Kremlin. Indeed, politics always goes ahead of money.

At the beginning of the year, I predicted a corridor for the Russian currency rate within 69 – 75, allowing its short-term deviation within 67 – 77, and as we can see, so far I was right. All attempts to push the ruble above the level of 77 were unsuccessful, and now, having returned to the range of 69 – 75 rubles per dollar, the Russian currency rushed to its middle at 73 (Fig. 1). After that, it may well try to return to a level below 70 rubles per dollar. 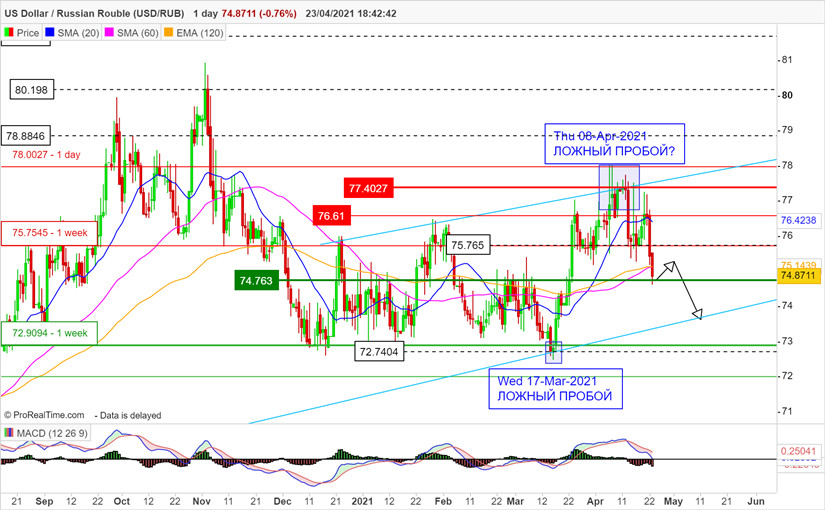 It is logical to assume that the pendulum of the exchange rate will now deviate in the other direction, and how would we not see the dollar below 70 rubles, especially since the Bank of Russia announced a high probability of a rate hike. Of course, geopolitical tensions have not gone anywhere, and most likely attempts to put pressure on Russia will continue, it may even come to disconnection from SWIFT, we will closely follow the events, but once again I must warn readers that there is no need to gamble with the state …

In general, an increase in interest rates is a favorable event that attracts capital, which means that the ruble will be even more attractive for non-residents than it was before the decision of the Board of Directors of the Central Bank of the Russian Federation, however, restrictions imposed by Western countries on Russia may lead to increased volatility. However, as recent events have shown, the sanctions were on the shoulder.

Be careful and careful, follow the rules of money management.