In the first half of the day, several signals to enter the market were formed. Let’s take a look at the 5 minute chart and break down all the trades. I paid close attention to the resistance at 1.3838 and recommended buying the pound from it, which is what happened: the bulls made a breakout and tested this area upside down, which formed an excellent entry point into long positions. We very quickly reached the first target 1.3876. Fixation above this level, by analogy with the morning buy, led to the formation of a new signal to open long positions, and then to an increase to the larger high of 1.3914. After a small downward correction from this level, the bulls decided to continue their march to the north and at the time of this writing, they have achieved a breakdown of the resistance at 1.3914. 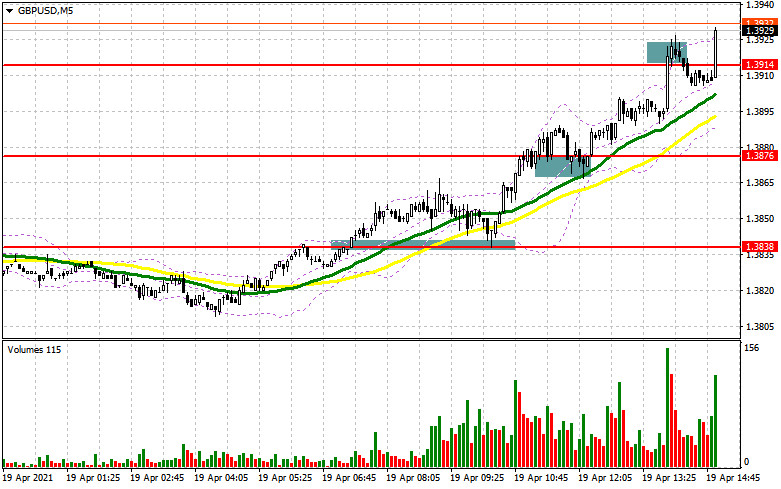 Only the consolidation at the level of 1.3914 with its test from top to bottom, as was the case with the first two signals today, forms an entry point for long positions in the continuation of the uptrend. Such a scenario will surely open a direct road to the area of ​​the new high at 1.3953, while the next, large area of ​​resistance is seen around the level of 1.3999, where I recommend taking profits. In a GBP / USD downside scenario in the afternoon, all buyers need is to defend support at 1.3876. Formation of a false breakout there will be an excellent entry point into the continuation of the bull market. In the scenario of the absence of bulls’ activity in the support area of ​​1.3876, it is best not to rush to buy: the best option would be to open long positions immediately on a rebound from a large local minimum at 1.3838, from which the entire upward movement began today. There are also moving averages that play on the side of buyers.

Also read  Analytics and trading signals for beginners. How to trade the GBP / USD currency pair on April 19? Analysis of Friday deals. Preparation

Sellers defended the resistance at 1.3914, but only for a while. The main task of the bears for the second half of the day will be the next formation of a false breakout and the return of the pair below the level of 1.3914, which will generate a signal to open short positions. This will lead to a rapid decline in GBP / USD to the support area of ​​1.3876, where I recommend taking profits. An equally important goal of sellers will also be to regain control over this level, however, due to the absence of important fundamental statistics and such a strong bullish trend, this is unlikely to be possible. Only a breakout of 1.3876 would push the GBP / USD back to the 1.3838 low. In the scenario of further growth of GBP / USD during the American session above the level of 1.3914, it is best not to rush to sell: the best option would be short positions immediately to rebound from the new resistance at 1.3953, counting on a downward correction of 25-30 points within the day. The next major resistance is seen around 1.3999.

EUR / USD: plan for the American session on April 19 (analysis of morning deals). Buyers rush through sellers’ stop orders and hit resistance at 1.2047 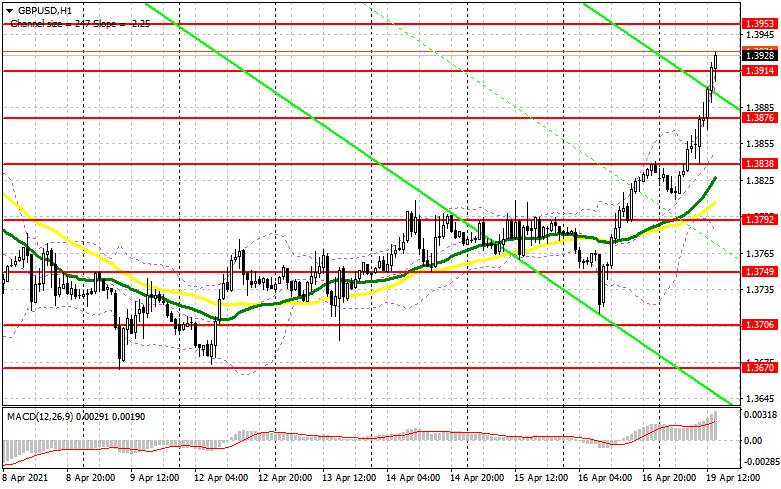 Let me remind you that the COT reports (Commitment of Traders) for April 6 recorded a reduction in long positions and an increase in short ones, while the total non-commercial net position decreased. Bears have been actively selling the pound all last week amid a tense Brexit situation, which led to riots in Ireland by the end of the week. Good fundamental data, which came out on the UK economy last week, only led to a high surge in volatility, after which the pair continued its decline. However, among investors and economists, there remains confidence that the recovery of the UK economy is gaining quite good momentum, which will support the British pound this summer. At the Bank of England, the controversy over changes in monetary policy has long been growing, as additional inflation problems will arise as the economy grows and will need to be addressed. Those who are counting on buying the pound should take a closer look at the market, since now there are quite good prices, which may not be available in the near future. So: long non-commercial positions fell from 47 222 to 45 270. At the same time, short non-commercial positions rose from 22 263 to 25 219, which indicates an attempt to control the market by sellers in the short term. As a result, the non-profit net position fell to 19,951 from 21,819 a week earlier. On the contrary, the weekly closing price rose to 1.3913 from 1.3774.

Also read  Plan for the American session on April 21 (analysis of morning deals). Bears continue to push the euro down. At gunpoint 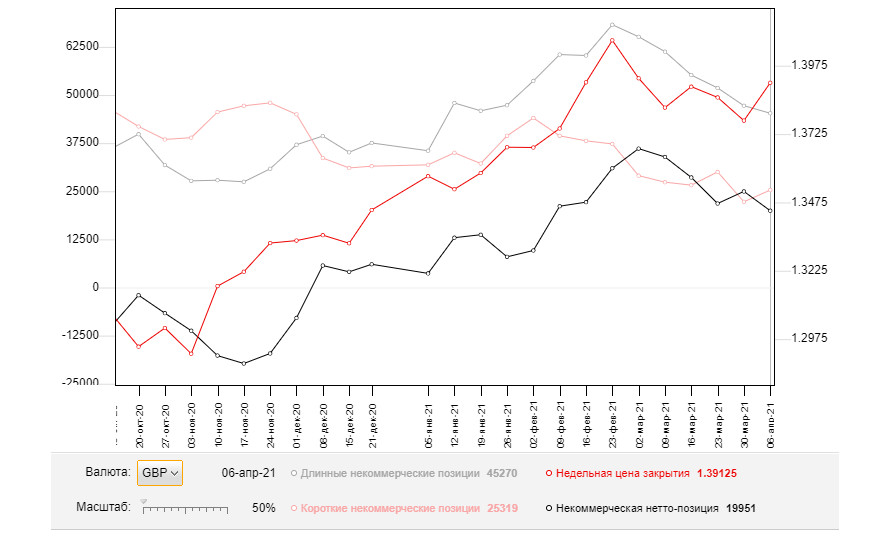 Trading is carried out above the 30 and 50 day averages, which indicates the continued growth of the pound in the short term.

In case of a decline, the indicator’s average border at 1.3855 will act as a support.