Several signals to enter the market were formed yesterday. Let’s look at the 5-minute chart and analyze the entry points: in the first half of the day, a signal to sell the pound was generated from the level of 1.3917, which I drew attention to in my morning forecast. It is clearly seen how, after an unsuccessful update of local minimums, buyers of the pound quickly return the market to the area of ​​large resistance at 1.3917, where a false breakout takes place. Already at the beginning of the American session, the bulls again tried to break above 1.3917 and also unsuccessfully, which confirmed the correct decision to enter, and also led to the formation of an additional signal to open short positions. As a result: the downward movement was about 30 points, which is more than half of yesterday’s intraday volatility. 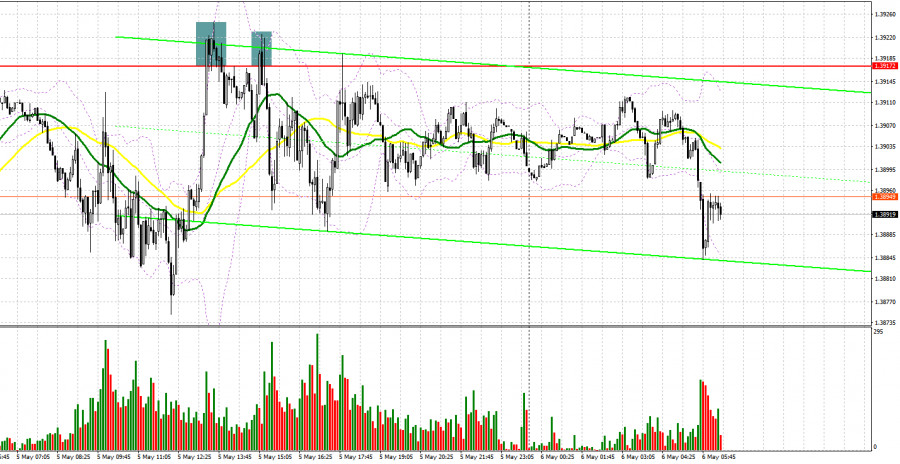 Technically, little has changed since yesterday. In the first half of the day it is important for buyers to achieve a breakout of the 1.3921 range, however, they are unlikely to do so before the publication of the Bank of England’s monetary policy decision. Only fixing above this level and testing it from top to bottom on the volume will be a signal to open new long positions, counting on the continuation of the April uptrend. The primary target will be growth to the rather important resistance 1.3970, where I recommend taking profits. The further target will be the maximum of 1.4016, the renewal of which will resume the bullish trend, allowing the pound to move beyond the wide sideways channel, in which it has been since the end of April. However, all this will be possible only if the British regulator announces the gradual curtailment of the emergency bond purchase program and changes in its monetary policy. In the event of a decline in GBP / USD, bulls will have to defend support at 1.3878, which formed yesterday. You can act from there only after the formation of a false breakout. In the absence of GBP / USD activity at the 1.3878 low: I recommend postponing long positions immediately to a rebound from the local support at 1.3839, or even lower – until the 1.3799 low test, from where you can expect an upward correction of 25-30 points within the day.

Also read  Overview of the EUR / USD pair. 26 April. The “era of the European currency” has begun.

At the moment, sellers need to think about how to defend the resistance at 1.3921, which they successfully did all day yesterday. If the pair returns to this level again during the European session, it is possible that the bears will retreat from it and wait for the decision of the Bank of England. Therefore, only the formation of a false breakout in the 1.3921 area generates a signal to open short positions with the expectation of a decline to support 1.3878, in the area of ​​which the pair stopped falling yesterday. If sellers’ activity is not observed at the level of 1.3921, and changes in the Bank of England’s policy will lead to an increase in the pair, I recommend postponing sales until the upper border of the side channel 1.3970 is updated, from where you can open short positions immediately on a rebound in the expectation of a downward correction of 20-25 points inside day. The next major resistance is seen at 1.4016. An equally important task for the bears will be to break through the support at 1.3878, which they did not manage to break below yesterday. Only a breakout and consolidation below this level with a reverse test of it from the bottom up will lead to the formation of a good entry point to short positions in the expectation of a return of the pair to the 1.3839 area, where I recommend taking profits. The further target will be the level 1.3799.

Also read  Plan for the American session on April 27 (analysis of morning deals). Bears are protecting resistance at 1.3892, forming


US inflation is not the only problem for investors. The course to strengthen the US dollar remains

EUR / USD: plan for the European session on May 6. Commitment of Traders COT reports (analysis of yesterday’s deals). The pressure on the euro remains, and the bears are aiming at the breakdown of the support of 1.1988 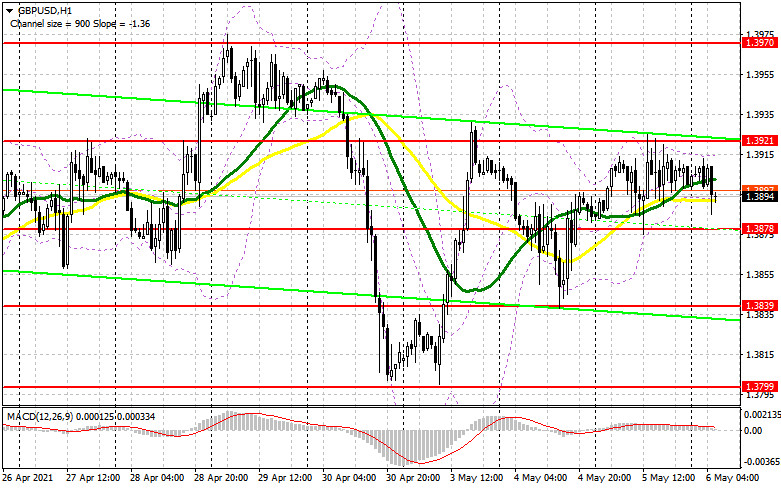 Let me remind you that the COT reports (Commitment of Traders) for April 27 recorded a reduction in both long and short positions, while the total non-commercial net position increased. How it happened – let’s figure it out. Last week, we did not see any important fundamental statistics for the UK, so all the attention was on the European Parliament vote on Brexit, the results of which supported the pound. Also, the speeches of the British Prime Minister and the possible earlier lifting of all quarantine restrictions in Britain allowed the buyers of the pound to adhere to their scenario to strengthen the pair. All this will continue to contribute to growth in the medium term, so I recommend betting on further strengthening against the US dollar. Any good downward correction of the pair is another reason to think about buying the pound, since the prospect of a recovery in the UK economy in the summer gives rise to a lot of optimism. The COT report indicated that long non-commercial positions declined from 61,053 to 59,917. At the same time, short non-commercials plummeted from 35,875 to 30,699, causing the non-commercial net position to rise to 29,218 against 25,178 a week earlier. Closing short positions once again points to the fact that the upside potential of the pound is enormous. Last week’s closing price also dropped slightly to 1.38947 against 1.39915.

Also read  While the dollar is showing signs of recovery, the sustainability of the USD rally remains in doubt 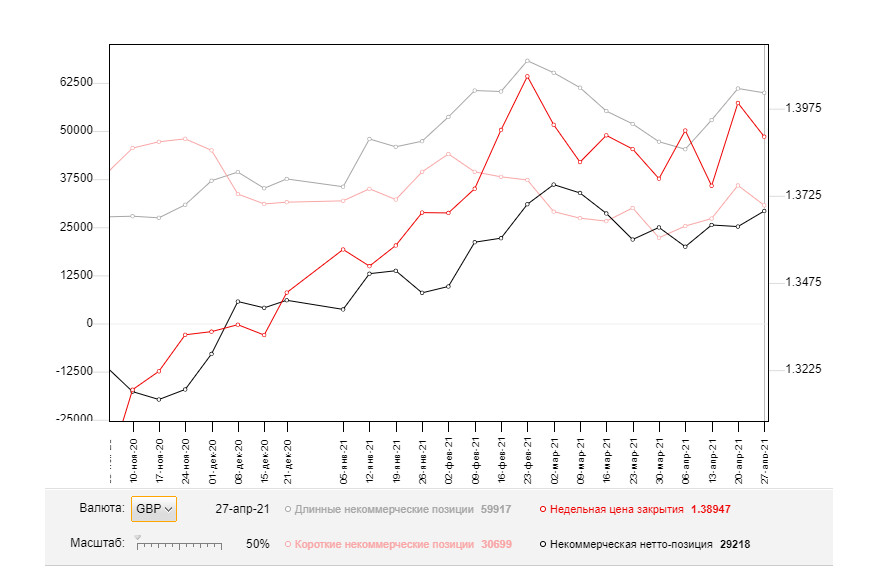 Trading is carried out in the area of ​​30 and 50 moving averages, which indicates the sideways nature of the market in front of important fundamental data.

Volatility has decreased, which does not give signals to enter the market based on the indicator.