The active growth of the euro in the first half of the day made it possible to partially win back positions after a large drop on Friday. A sharp decline in manufacturing activity in the US hit the US dollar positions in the second half of the day. However, during today’s Asian session, sellers returned to the market, not letting the pair rise above the resistance at 1.2074. The main task of buyers will be precisely in the breakdown of this level. 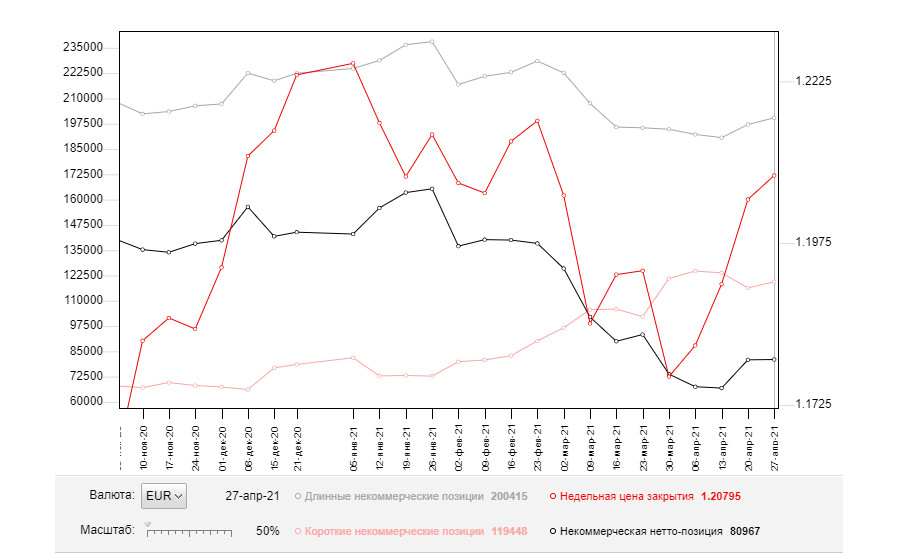 Before talking about further prospects for the EUR / USD movement, let’s see what happened in the futures market and how the Commitment of Traders positions have changed. The COT report (Commitment of Traders) for April 27 noted an increase in both short and long positions, but the latter turned out to be more, which led to an increase in the overall non-profit position. This suggests that active buying of the euro by the players continues and one can bet on the further strengthening of the pair after the downward correction. The decisions of the Federal Reserve System on interest rates and monetary policy did not significantly affect the US dollar rate, as well as the next programs proposed by US President Joe Biden to stimulate economic growth in the near future through changes in the tax system. Given that the Fed will continue to adhere to the previous course, even despite the sharp economic jump, the demand for risky assets is likely to remain after the decline in the EUR / USD pair earlier this month. The COT report indicated that long non-commercial positions jumped sharply from 197,137 to 200,415, while short non-commercial positions rose from 116,329 to 119,448, indicating an influx of new buyers in anticipation of continued growth in the euro. The more the euro corrects downward at the beginning of this month, the stronger the demand for it will be. As a result, the total non-commercial net position rose sharply from 80,808 to 80,967. The weekly closing price continued to rise to 1.20795 from 1.2042 a week earlier.

Also read  Analytics and trading signals for beginners. How to trade the EUR / USD currency pair on April 19? Analysis of Friday deals. Preparation

The downward correction of the euro may continue further after the withdrawal of stop orders of bears that entered short positions last week. Therefore, buyers need to defend the 1.2043 support. Only the formation of a false breakout there will be a signal to open long positions in the continuation of the upward trend that was formed yesterday. The lack of important fundamental statistics this morning can help with this. Also, the bulls need to think about how to regain the level of 1.2074. Only a breakout and consolidation above this range with a reverse test from top to bottom generates a signal to open new long positions with the expectation of a continuation of the upward trend already in the area of ​​a new high of 1.2111, where I recommend taking profits. The next target will be the level of 1.2148, but one can hardly bet on such an active growth of the pair without good macroeconomic statistics for the eurozone. If the bulls do not show any activity in the first half of the day, a larger decline in EUR / USD can be expected. In this case, I recommend opening long positions only if a false breakout is formed in the area of ​​1.2016, which forms a good buy entry point with the main goal of returning to the level of 1.2043. But I recommend buying EUR / USD immediately on a rebound only from a new local minimum of 1.1979, counting on an upward correction of 20-25 points within the day. 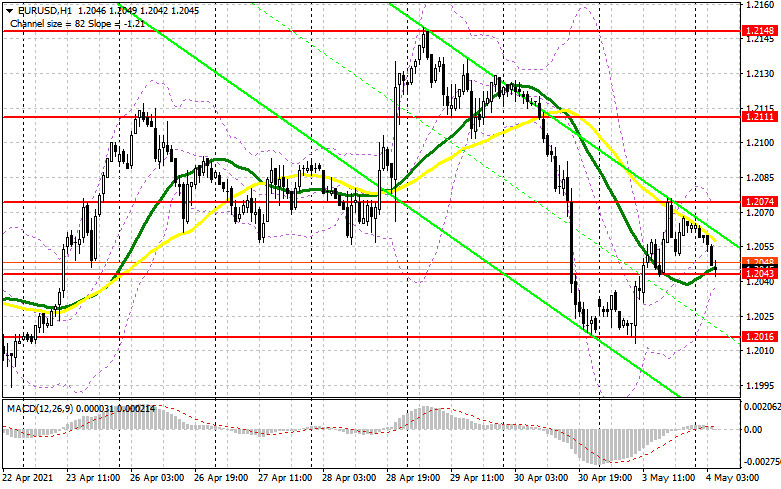 The bears will struggle to take control of the intermediate support level of 1.2043, which may become the middle of the sideways channel in the near future. Therefore, only a breakout and a test of this level from the bottom up on the volume generates a signal to sell the euro in order to continue the downward trend towards the low of the week 1.2016, which is also the lower border of the current sideways channel. A breakthrough of this range will certainly increase pressure on the euro, and a reverse test of this level will push the pair even lower to the 1.1979 area, where I recommend taking profits. If in the first half of the day today we observe an upward correction of the pair, then it is best not to rush to sell: the formation of a false breakdown in the resistance area of ​​1.2074 forms a new signal to sell the euro with the aim of further downward correction. In the absence of bears’ activity at this level, I recommend postponing short positions immediately to a rebound from a large resistance at 1.2111, counting on a downward correction of 20-25 points within the day.

Trading is carried out in the area of ​​30 and 50 moving averages, which indicates the sideways nature of the market after yesterday’s upward correction of the pair.