Another day passed yesterday under the banner of “calmness and silence”. Traders ignored the statistics, which yesterday came out quite strong in the American economy, and today they are waiting for important statements from the chairman of the Federal Reserve System Jerome Powell, who, of course, will not say anything that could radically change the direction of the market. Despite the low volatility, one signal to sell the euro was generated yesterday. Let’s take a look at the 5-minute chart and analyze the entry point: in my forecast for the second half of the day, I advised to open short positions after the formation of a false breakout in the resistance area of ​​1.2089, which happened. It is clearly seen how sellers defend this level, after which a good entry point is formed. However, against the background of low market volatility, there was no major fall. The maximum that could be expected was a 20-point decline. 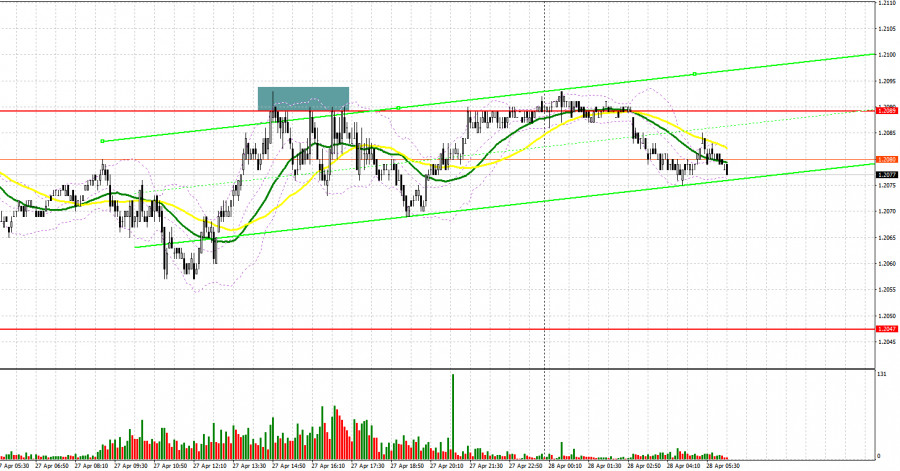 From a technical point of view, nothing has changed much. Today in the first half of the day again important fundamental statistics are not expected, so trading volume and volatility will remain at a low level until the publication of the decision of the Federal Reserve System on interest rates. Bulls still need to think about how to regain the level of 1.2093. Considering that there are no important reports on the eurozone in the first half of the day, it will be very problematic to do this. Maybe during the speech of the President of the European Central Bank Christine Lagarde there will be any changes, and even then it is unlikely. Only a breakout and consolidation above the range of 1.2093 with a reverse test from top to bottom forms a signal to open new long positions in the expectation of a continuation of the upward trend already in the area of ​​a new high of 1.2133, where I recommend taking profits. The next target will be the level of 1.2180, but we will be able to recover to it only after the publication of the Fed’s decision on monetary policy. If the bulls show no activity in the first half of the day, a larger decline in EUR / USD can be expected. In this case, I recommend opening long positions only if a false breakout is formed in the area of ​​1.2047, which forms a good buy entry point with the main goal of returning to the level of 1.2093. In the scenario of no bulls’ activity and at the minimum of 1.2047, it is best to postpone long positions until the lower border of the side channel of the last week near 1.1998 is updated, from there you can buy the euro immediately on a rebound with the aim of an upward correction of 20-25 points within the day.

Although the bears are trying to break the bull market, they cannot do much. Yesterday’s small rebound from resistance 1.2089 ended with a smooth return of the pair to this level today in the Asian session. Today, the main task of sellers in the first half of the day is to form a false breakout in the area of ​​resistance 1.2093, which creates a good signal to open new short positions in the continuation of the current downward correction of the pair to a minimum of 1.2047, where I recommend taking profits. In case of a larger spike in volatility in the first half of the day: the next target will be the area of ​​1.1998, which is the lower border of the sideways channel of the previous week. However, we will be able to get there only in case of unexpected statements by the chairman of the Federal Reserve System Jerome Powell on changes in monetary policy. If the bears do not show activity in the area of ​​1.2093, and the bulls manage to regain this range, it is best to refuse to sell until EUR / USD reaches a new local maximum in the area of ​​1.2133. You can also sell the euro on a rebound from the level of 1.2180, counting on a downward correction of 20-25 points within the day.

Also read  Citizens began to save on medicines 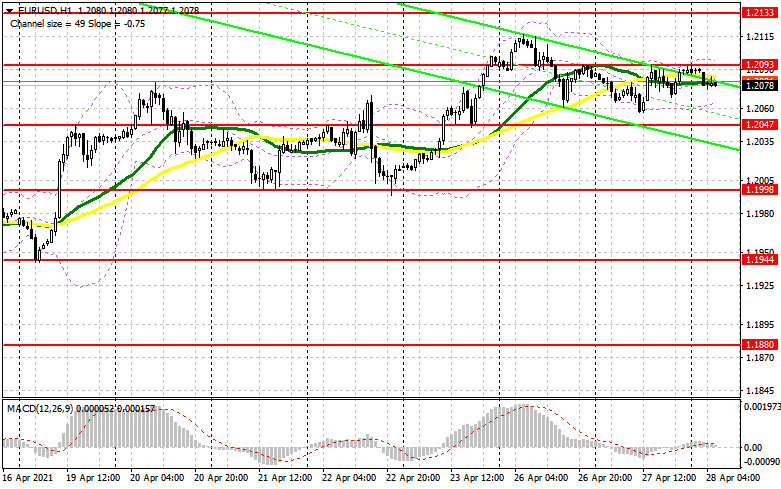 Let me remind you that in the COT report (Commitment of Traders) for April 20, the indicators of long and short positions have changed quite seriously – short positions have decreased, and long ones have grown significantly, which indicates more active purchases of the euro by players. The news that the vaccination program in the European Union is bearing fruit is supporting the euro, as well as the fact that large eurozone countries will begin to more actively withdraw from quarantine in the near future. The decisions of the European Central Bank on monetary policy did not significantly affect the rate of the European currency, since no changes were made, as well as talks on the part of the ECB’s board about the high rate of the euro. The COT report indicated that long non-commercial positions jumped sharply from 190 640 to 197 137, while short non-commercial positions fell from 123 789 to 116 329, indicating an influx of new buyers with the expectation of continued growth of the euro. Therefore, it is not surprising that any calculation for a downward correction of the pair in the short term has failed in the past week. As a result, the total non-profit net position rose sharply from 66,851 to 80,808 a week earlier. The weekly closing price continued to rise to 1.2042 versus 1.1911 last week.

Also read  Plan for the European session on June 21. Commitment of Traders COT reports (analysis of yesterday's deals). The fall of the pound will continue 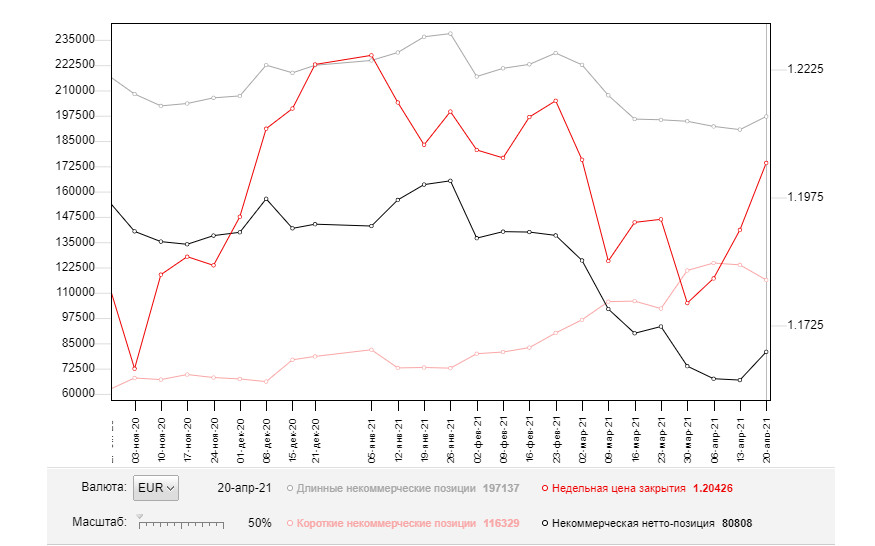 Trading is carried out in the area of ​​30 and 50 moving averages, which indicates the sideways nature of the market before important decisions.

A breakout of the upper border of the indicator in the area of ​​1.2095 will lead to a new wave of euro growth.