Yesterday there was only one good signal to enter the market, which I drew attention to in my morning forecast. Let’s take a look at the 5-minute chart and talk about what happened: you can clearly see how, after several unsuccessful attempts to catch on to the resistance of 1.4000, the bulls retreated from the market, giving control to sellers. A false breakdown of the 1.4000 level led to the formation of a good entry point for short positions, which ultimately pushed the pair to the target level 1.3944, to which we just fell short of a couple of points. Of course, it was quite difficult to sit out all the downward movement after yesterday’s bull market, but whoever managed could easily take away about 50 points of profit. I took only 27. In the second half of the day I did not wait for any specifics from the level of 1.3944, and after “smearing” this range, the bears still managed to close the day lower, keeping the market under their control. 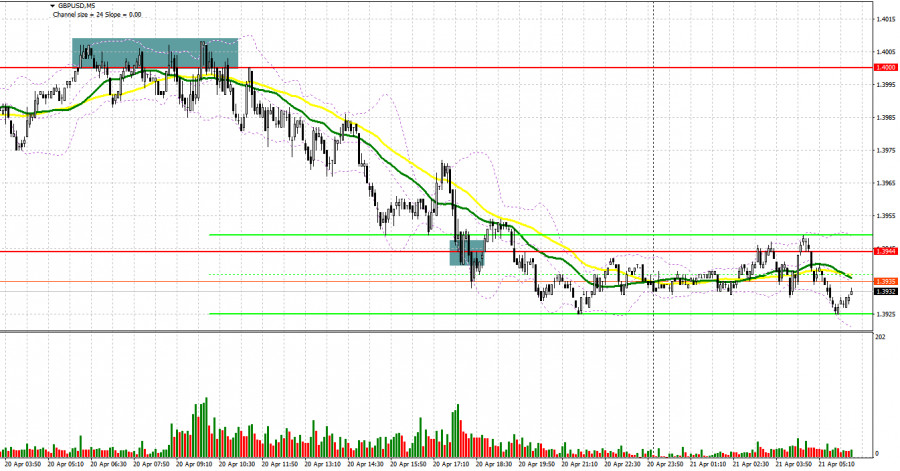 A number of fundamental statistics related to inflation are being released in the UK today. Good performance can bring the pound back in strength, which will lead to its strengthening in the morning. To resume growth in GBP / USD, an important task for buyers will be to break through the level of 1.3944, which they missed yesterday in the afternoon. Fixation on this range with a test from top to bottom forms an entry point to long positions in the continuation of the uptrend formed on April 8. Such a scenario will definitely open a direct road to this week’s high at 1.4000, while the next major resistance area is seen around 1.4062, where I recommend taking profit. In the event of a further decline in the pound after inflation data, only the protection of the level of 1.3892 and the formation of a false breakout there form a signal to enter long positions in the expectation of renewed growth in the pair. In the scenario of the absence of bulls’ activity and in the support area of ​​1.3892, it is best not to rush to buy: the best option would be to open long positions immediately on a rebound from a large local minimum of 1.3838, counting on an upward correction of 25-30 points within the day. The next big support is seen at 1.3792.

Also read  Bloomberg: the USA is considering the possibility of toughening old sanctions against Russia and introducing new ones

As long as trading remains below the resistance level of 1.3944, the pound will remain under pressure. The next formation of a false breakout in the first half of the day there forms an additional entry point into short positions against the trend, which will lead to a downward correction of the pair to the support area of ​​1.3892, from where it will be possible to observe the active actions of buyers. A breakout and consolidation below this range with a test from the bottom up will form a good signal to open new short positions in anticipation of a further fall in GBP / USD to a minimum of 1.3838, and a further target will be support at 1.3792, where I recommend taking profits. In the absence of activity on the part of sellers in the resistance area of ​​1.3944, it is best not to rush to sell: in this case, I advise you to postpone short positions immediately to a rebound from yesterday’s high of 1.4000, counting on a downward correction of 25-30 points within the day. The next major resistance is seen at 1.4062.

EUR / USD: plan for the European session on April 21. Commitment of Traders COT reports (analysis of yesterday’s deals). The bulls fought hard for the level 1.2047, but surrendered it in the afternoon 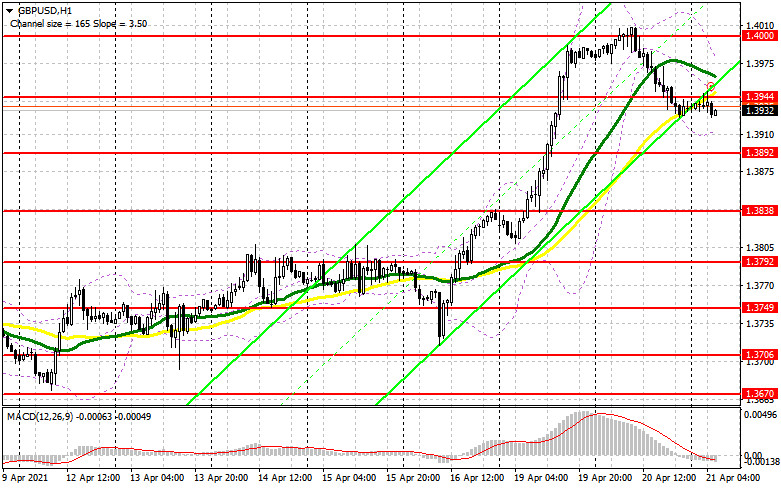 Let me remind you that the COT reports (Commitment of Traders) for April 13 recorded an increase in both long and short positions, while the total non-commercial net position increased, which indicates a higher activity of pound buyers. Good fundamental data, which have recently been released on the UK economy, once again prove that there is a fairly high probability of strong economic growth rates in the 2nd quarter of this year, which will further contribute to the growth of the British pound in the medium term. The Bank of England has long been talking about how to proceed with stimulating monetary policy, as additional inflation problems will arise as the economy grows. The growth of the pound at the beginning of this week once again proves its attractiveness for large players and, most likely, the bull market will only gain momentum by this summer. The COT report indicated that long non-commercial positions rose from 45,270 to 52,851. At the same time, short non-commercial positions increased from 25,219 to 27,261, bringing the non-commercial net position to 25,590 from 19 951 weeks earlier. On the contrary, the weekly closing price dropped to 1.3753 from 1.3913. 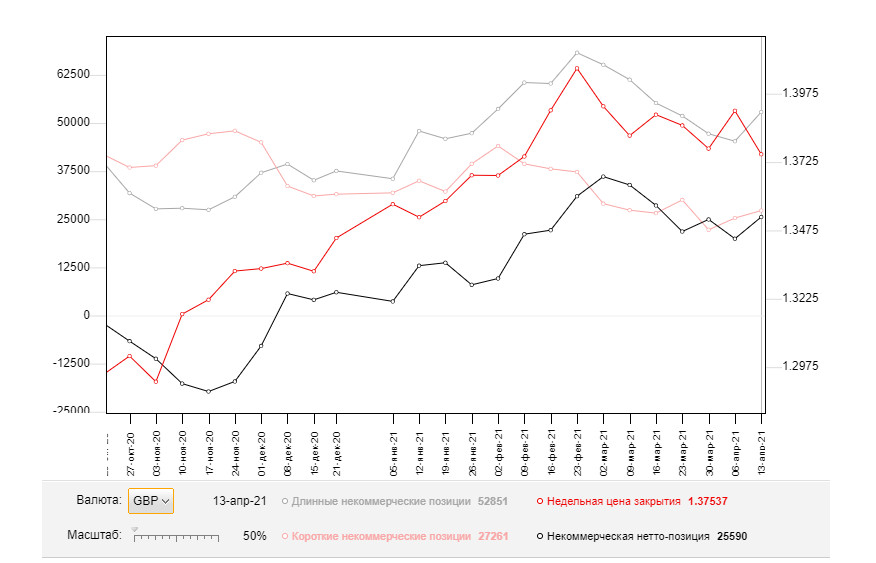 Trading is under the 30 and 50 moving averages, which indicates an attempt by the bears to break the uptrend seen earlier this week.