In my morning forecast, I paid attention to the level 1.3892 and recommended making decisions based on it. Let’s look at the 5-minute chart and understand the entry points: after a small upward correction of the pair in the first half of the day in this range, the bears achieved a false breakout there, where I recommended opening short positions in the morning. As a result, the downward movement amounted to about 35 points. Closer to lunchtime, the bulls brought the pair back to the level of 1.3892, intending to break it down. 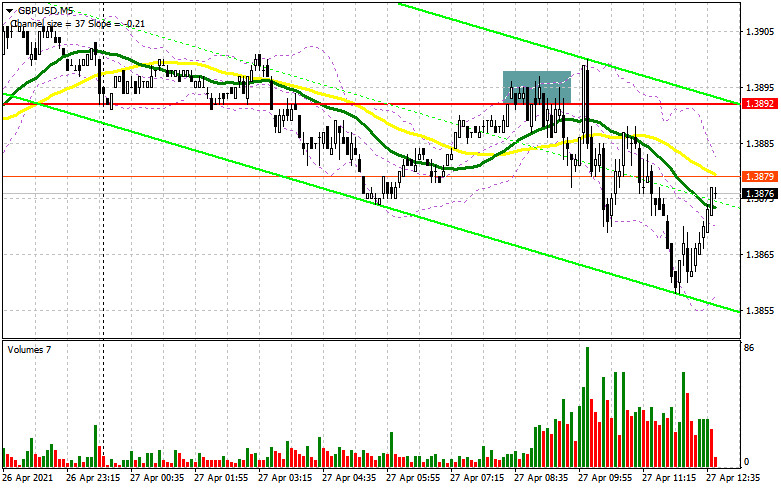 Buyers did their best to get above resistance 1.3892 in the first half of the day, but another false break resulted in increased pressure on the pair. The Confederation of British Industrialists’ retail sales report then supported the pound, which kept the GBP / USD technical picture unchanged for the afternoon. However, you need to proceed with extreme caution, as soon as trading will again be conducted around the level of 1.3892, from which decisions will have to be made. Only a return and test of this range from top to bottom on the volume will allow to build up long positions, which generates a signal to buy the pound, counting on an increase to a maximum of 1.3944. A further target will be the area of ​​1.4000, where I recommend taking profits. If the pressure on the pound returns in the afternoon after the data on consumer confidence in the US, I recommend not to rush into purchases: the best scenario would be a test of the large support at 1.3838, which was formed last Friday. From this level, you can buy the pound immediately on a rebound in the expectation of a correction of 20-25 points within the day. The next big support is seen around 1.3792.

Also read  News calm, accompanied by a new strengthening of the GBP

In the first half of the day, the sellers performed well after a false breakout in the resistance area of ​​1.3892. In the afternoon, they still need to defend this level. Only another unsuccessful consolidation above resistance 1.3892 will lead to the formation of a signal to open short positions in the expectation of a larger downtrend to the support area 1.3838. It will be possible to speak of a breakdown of this range only after good data on the American economy, which may push the pair even lower – to the 1.3792 area, where I recommend taking profit. Under the scenario of the return of control by the bulls over the level of 1.3892, the best option would be to sell the pound only on a rebound from a large local maximum of 1.3944, counting on a downward correction of 20-25 points within the day. The next major selling resistance is seen around 1.4000.

Also read  Plan for the European session on May 10. Commitment of Traders COT reports (analysis of yesterday's deals). The pound took off after 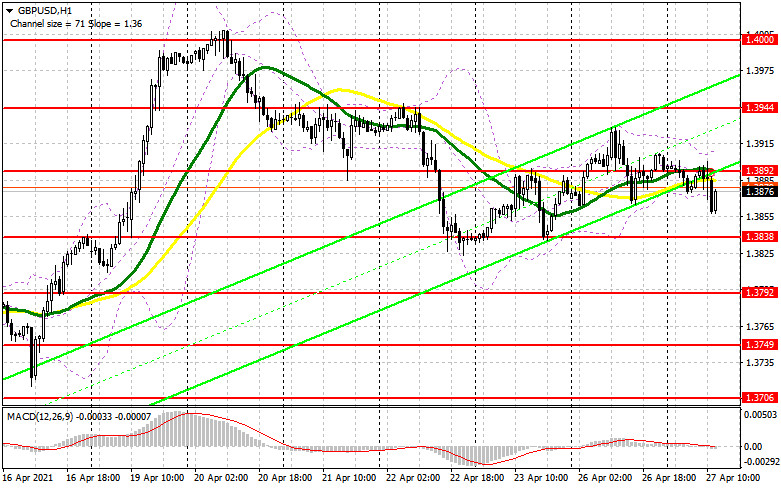 Let me remind you that the COT reports (Commitment of Traders) for April 20 recorded an increase in both long and short positions, while the total non-commercial net position remained almost unchanged, only slightly decreasing from the previous value. The growth of positions indicates a return to the market of players hoping for further growth of the pound. However, such high prices are very attractive for sellers, therefore, a sharp rise in short positions was also noted. Good fundamental data, which came out last week on the UK economy, once again proves a fairly high probability of strong economic growth rates in the 2nd quarter of this year. This will further contribute to the growth of the British pound in the medium term, so I recommend betting on its further strengthening against the US dollar. It is important how the market reacts to the fundamental reports on the American economy this week and to the decision of the Federal Reserve System on interest rates – this will be the main one for the further movement of the pound along the trend or for a downward correction of the pair. The COT report indicated that long non-commercial positions rose from 52,851 to 61,053. At the same time, short non-commercial positions increased from 27,261 to 35,875, resulting in a non-commercial net position only slightly declining to 25,178 versus 25,590 weeks earlier. On the other hand, the closing price jumped to 1.3991 against 1.3753 last week, which indicates an upward potential for the pair. 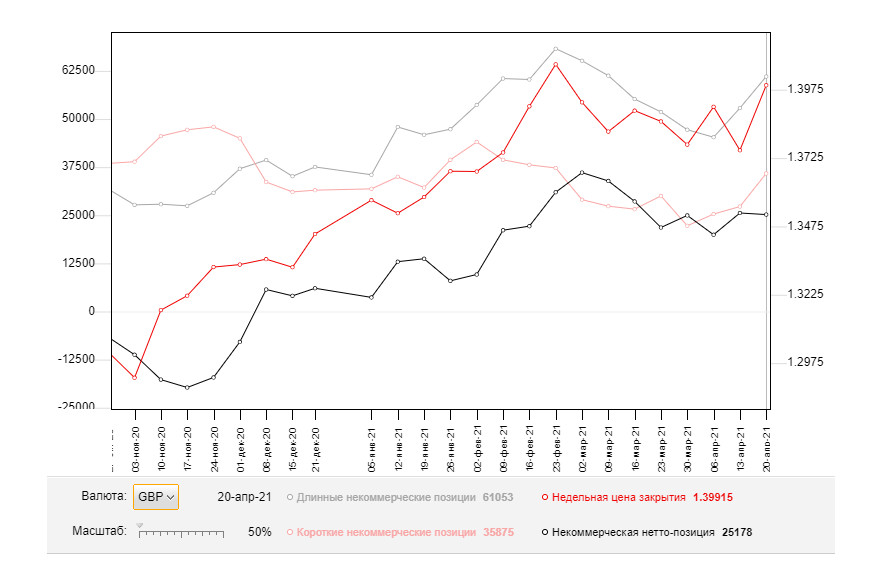 Trading is carried out in the 30 and 50 day averages, which indicates market uncertainty with direction.

A breakout of the upper border of the indicator around 1.3910 will lead to a new wave of growth in the pound.