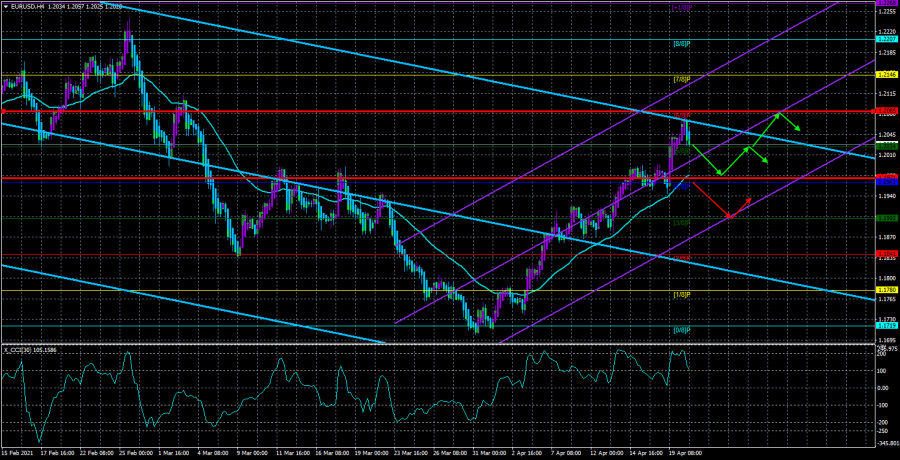 The EUR / USD currency pair continued its upward movement for most of Tuesday, April 20. Thus, after the pair had already gone up almost 400 points, the downward correction did not start. The bulls are in excellent mood now, although it is quite possible that traders, in principle, have nothing to do with the strong growth of the European currency at this time. Or it is better to say “to a strong fall in the American currency”, because the pound sterling is also growing at this time. There are times when every day new messages and news arrive, events take place and macroeconomic reports are published. Then you have to try to collect all this information together and understand how all these factors will generally affect this or that pair. Now there is really nothing to analyze. No important macroeconomic statistics were released on Monday or Tuesday, neither in the US nor in the EU. There were no unplanned events or performances either. By and large, there were no changes in the fundamental background, just as there was no new macroeconomic background. That is, in the literal sense of the word “nothing”. Nevertheless, the euro / dollar pair rose 65 points on Monday and added several dozen points on Tuesday. It seems to be a little, but at the same time, the pair has gone up almost 400 points in total. From our point of view, in the last few months and in the next few months, everything will depend on only two factors. The first is technical. We have already said that for almost the entire 2020, the pair was inside an uptrend. Therefore, three months of the downward movement in 2021 is the purest correction. What happens after the correction is complete? The resumption of the uptrend. From our point of view, this is exactly what is happening now. The second factor is fundamental – the pumping of the American economy with dollars, and we talk about this factor almost every day, because there are no other reasons for the strengthening of the European currency now and cannot be. On the basis of what is the basis for the eurocurrency to grow now, if the US economy is recovering much faster, vaccinations are taking place at a high rate, and the pandemic overseas is receding? That is, in the European Union now everything is exactly the opposite! From our point of view, the pair may take a short break near the 1.2090 level, where the Senkou Span B line of the Ichimoku indicator on the 24-hour timeframe passes. A rebound from this line can trigger a downward correction.

What else can affect the euro / dollar rate in the near future. We believe that practically nothing. The American economy is pumped with big money, so this factor is extremely important and overrides other factors. Of course, in the short term, traders can react in whatever way they like to macroeconomic statistics or statements by central bankers. But the global trend will not change from this. In order for the fall of the American currency to stop, it is necessary that the flow of trillions of dollars into the American economy stops. And it won’t stop in 2021. First, the US Congress and Joe Biden have just begun implementing the first $ 1.9 trillion stimulus package. Secondly, the US government wants to adopt a second stimulus package for another $ 2.6 trillion by summer. Third, the Americans, with the weakening of the pandemic, will get the accumulated $ 1.5 trillion from under their pillows and realize the pent-up demand. Fourth, the Fed is not going to wind down its quantitative stimulus program, which involves buying back $ 120 billion of bonds every month. Thus, a huge amount of money will pour into the US economy this year. Therefore, nothing will change. The European Union, meanwhile, cannot deal with even one Recovery Fund. Despite the fact that the EU economy is one of the three leaders in terms of GDP in the world, the EU authorities are very weak in stimulating it (in comparison with the same States). Thus, much less money is poured into the economy, and therefore the euro currency depreciates much more slowly. This is good for the euro, but bad for the European economy itself. Plus, in Germany, France and some other EU countries, new “waves” of the epidemic and new “lockdowns” have begun, which will slow down the recovery. And vaccination of the population is still uneven and slow. Perhaps the situation will improve slightly in the second quarter of 2021, but it is still too early to talk about it.

This week, perhaps the most interesting event will be the ECB meeting. However, the issues that will be resolved on it are unlikely to have a strong impact on the European economy and the euro rate. Bets are 100% likely to remain unchanged. So is the scope of the PEPP program. Thus, we will only talk about the rate of bond buybacks from the open market. Recall that at one of the last meetings of the ECB announced an increase in the rate of asset purchases in order to resist the growth of government bond yields. It was possible to stop the growth. Thus, the ECB has achieved its goal. Will the rates of asset purchases decrease now or will they remain the same? How long will the PEPP program last? As stated earlier, until March 2022 or longer given the weak economic recovery in the EU? Christine Lagarde herself recently said that the EU economy is now comparable to a patient after surgery, who relies on two crutches to stand on his feet. These “two crutches” are fiscal and monetary stimulus. And if you remove them, then “the patient will fall,” says Lagarde. Thus, there can be no talk of any tightening of monetary policy now. Therefore, this week the ECB is likely to leave all parameters unchanged.

Also read  Euro and the pound are in for good times. Time to bet on growth 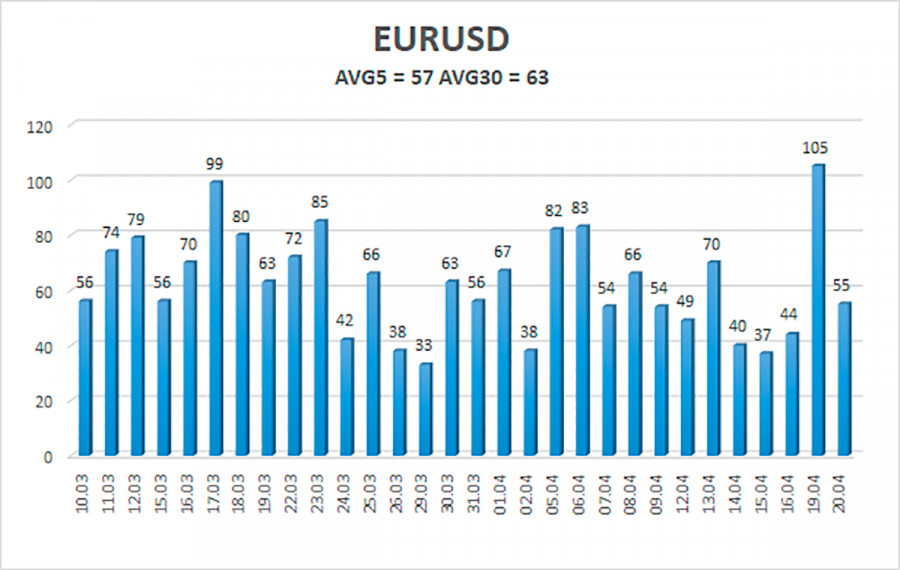 The volatility of the euro / dollar currency pair as of April 21 is 57 points and is characterized as “average”. Thus, we expect the pair to move between the levels of 1.1971 and 1.2085 today. A reversal of the Heiken Ashi indicator back upward will signal the resumption of the upward movement.

Forecast and trading signals for the EUR / USD pair for April 21.

Forecast and trading signals for the GBP / USD pair for April 21.