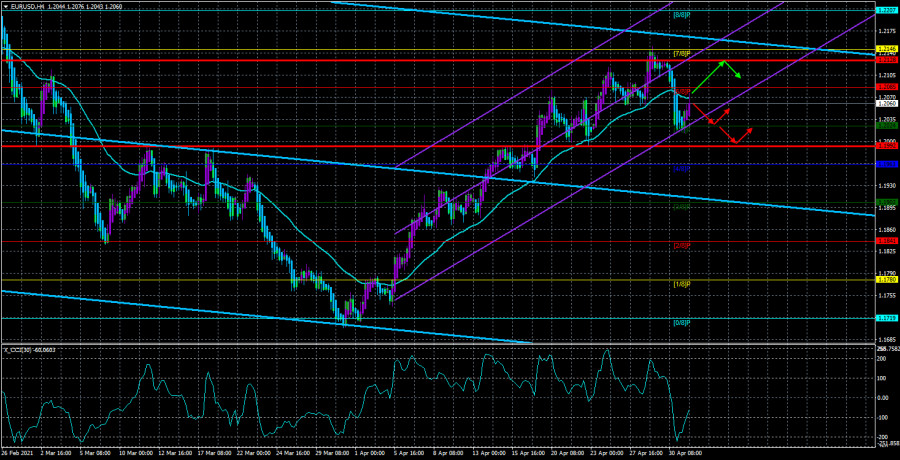 The EUR / USD currency pair on Monday absolutely predictably began an upward movement. After the quotes fell almost out of the blue by 100 points on Friday, a slight upward pullback was required. However, it also cannot be said that the downward movement is over. The euro / dollar pair has consolidated below the moving average line, so the trend has changed to a downward one. Of course, the current downward movement looks like a normal correction. We see a monthly uptrend in the illustration, so the correction against it should be proportionate. Consequently, in order to build it, it is required to consolidate the quotes below the MA, which happened on Friday. Thus, after a slight upward movement of quotes, we expect a renewed decline in the pair with the targets of the Murray levels “4/8” and “3/8”, that is, up to the 19th level. As for the more global prospects for the pair, we still believe that in 2021 the pair will continue to grow, that is, the depreciation of the US dollar. Especially if Joe Biden and company continue to inject trillions of dollars into the American economy. We have raised this topic many times, but, unfortunately (or fortunately), now it is it that has the greatest impact on the foreign exchange market. Thus, we could write that at this time it is important to monitor the yield of the US 10-year Treasuries or the actions and rhetoric of the Fed, however, all this is not important or not too important right now. Of course, any fundamental or macroeconomic event can be followed by a market reaction. But we still remember Friday when the last NonFarm Payrolls report in the US came out. When the market responded to strong numbers by simply leaving ahead of schedule for the weekend. Volatility was then 40 points, if not less. Thus, if the markets allow themselves to ignore really important reports, really important events, then we can only conclude that they continue to be more impressed by more “global fundamentals”. And this is definitely not the rhetoric of Jerome Powell, who repeats the same thing over and over again, and the markets manage to be disappointed that he did not live up to their expectations and did not say anything new. There is nothing to say about the European Union now, because nothing but banal statistics comes out there. The Economic Recovery Fund is already reminiscent of the Brexit process, which has been dragging on for too long while the EU economy needs help yesterday. Of course, there are smart people in the European Commission and the European Parliament who do everything in their power to start forming and distributing the fund as soon as possible. However, with the most optimistic estimates, aid will begin to be provided to the EU countries this summer. There is also nothing to write about vaccination now. The process continues, everything is also not fast. In general, now, as before, there is a “global factor” of inflation of the money supply in the United States, a technical factor and everything else. Everything else has practically no effect on the movement of the euro / dollar pair.

Also read  Analytics and trading signals for beginners. How to trade the GBP / USD currency pair on April 26?

In recent articles, we also put on the agenda the factor of the speed of recovery of the American economy in comparison with the European one. We carried out the simplest calculations that showed that the American economy in the first quarter of 2021 surpassed the European one, if we take into account the absolute values ​​of the recovery after the disastrous beginning of 2020. Simply put, at the moment the US economy has recovered more strongly from the crisis than the European one. Thus, theoretically, it will continue to break away from the European one further, since the States clearly do not spare money for stimulation, but in Europe there are much more problems and obstacles with this. However, from our point of view, the factor of printing dollars in tons and trucks is still stronger. And in 2021, the deferred demand of the Americans, who, according to various estimates, accumulated about $ 1.5 trillion during the pandemic, may begin to be realized. This money will also pour into the economy. Thus, at this time, we simply do not see any new factors that can change something for the euro / dollar pair.

There will be practically no important statistics this week. And the statistics that are nevertheless planned in the States and the European Union may by 90 percent pass by the market participants. It seems that this week is scheduled to publish the ISM PMIs in the manufacturing and services sectors in the US, the ADP report, Powell’s speech, Christine Lagarde’s speech, NonFarm Payrolls and the US unemployment rate. Let’s go through all these events and reports in more detail. The ADP report on the change in the number of employees in the private sector has not caused any reaction from traders for a long time. Business activity indices in the United States are very high, so changes by 1-2 points in any direction are unlikely to cause a reaction. The speeches of Jerome Powell and Christine Lagarde are unlikely to provide any new information to the markets, since both functionaries have been repeating the same thing over and over again in recent months. There remains only hope for NonFarm Payrolls and the unemployment rate in the United States, which will be published on Friday. But, as we have already said, this data can be easily ignored. Thus, it is highly likely that none of these events will find a reaction from market participants. The week can turn out to be purely technical. However, this does not mean that the pair will stay in one place, but the volatility may, of course, decrease. 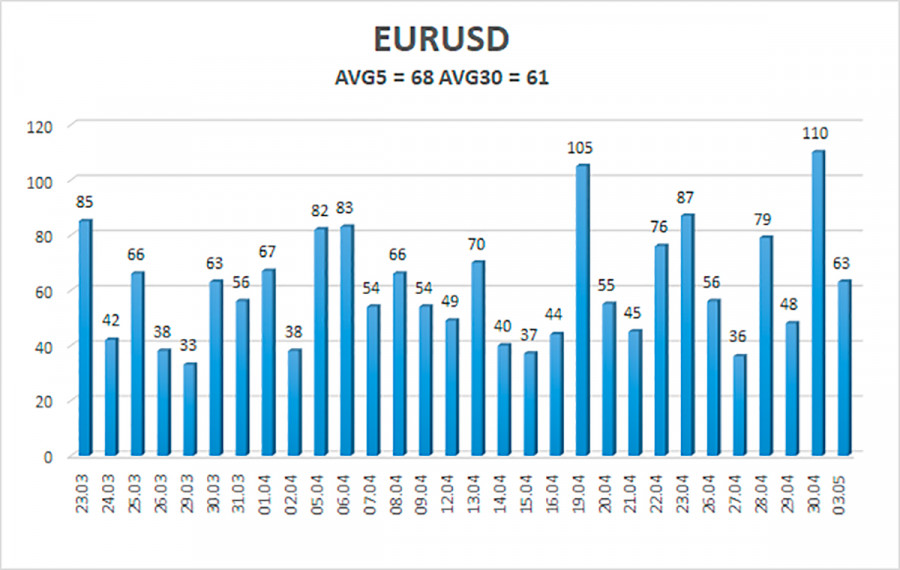 The volatility of the euro / dollar currency pair as of May 4 is 68 points and is characterized as “average”. Thus, we expect the pair to move between the levels of 1.1992 and 1.2128 today. A reversal of the Heiken Ashi indicator back downward will signal the resumption of the downward movement.

The EUR / USD pair has consolidated below the moving average, so the trend has changed to a downward one. Thus, today it is recommended to open new short positions with the targets of 1.2004 and 1.1992 in the event of a price rebound from the moving average line. It is recommended to consider buy orders if the pair consolidates above the MA with the target of 1.2128.

Review of the GBP / USD pair. May 4th. Boris Johnson was involved in three high-profile scandals at once. Great Britain awaits elections in Scotland.

Forecast and trading signals for the EUR / USD pair for May 4.

Forecast and trading signals for the GBP / USD pair for May 4.