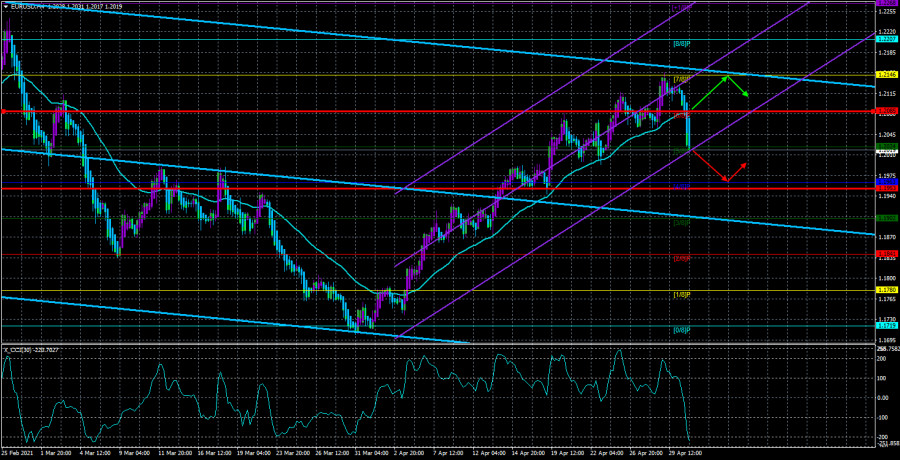 The EUR / USD currency pair fell down quite unexpectedly for many on Friday. Of course, we can always say that buyers have fixed a part of the profit, that is the end of the week, that the end of the month, but from our point of view, the fact is that the pair has simply turned out to be strongly overbought in a short period of time. The pair began to grow on March 31, that is, it grew for exactly a month and during all this time there was not a single sensible correction, only small pullbacks. Thus, a correction was brewing. What should draw the attention of traders to the fact that Friday’s macroeconomic statistics from the Eurozone is not the reason for this fall. If only because there were three important reports published in the EU. It cannot be said that traders took into account one report and ignored the other two. Otherwise, there will be no point at all in macroeconomic statistics. It will always be possible to “pull up the ears” any movement of the couple to any report, stating that all other data were simply ignored. And statistics from the EU were contradictory. If inflation has risen and this is bad for the euro currency, then the unemployment rate has decreased, and the GDP, although it contracted in the first quarter, fell less than the markets expected. Thus, from our point of view, nothing has changed globally. We still have a global uptrend that broke off for a three-month retracement earlier this year. A month ago, this correction could have ended, so at this time for about a month we can observe an attempt to resume the upward trend. The fundamental reason is the same. Flooding the American economy with trillions of freshly printed dollars. The money supply is growing, which, naturally, negatively affects the dollar exchange rate.

Also read  Is it possible to make money on the "Australian Dollar"?

In recent weeks, more and more experts are paying attention to the means by which the American economy is given a quick recovery. The US Congress and Joe Biden set out to come up with a new $ 2 trillion stimulus package every month. At the beginning of the year, a package for $ 1.8 trillion was implemented, and now two more packages for $ 1.9 trillion and $ 2.25 trillion are being discussed. That is, only in the first half of the year 6-7 trillion dollars can be poured into the American economy. Naturally, when the money supply is inflating at such a rate, it is hardly worth talking about the growth of the American currency. In general, the topic of financing all these packages in the States is very interesting. The game is called “find where the money comes from.” Some believe that the money is constantly printed by the Fed, and then buys back the government’s debts. Some believe that it is all about government funds, which are constantly lending. Some believe that it is all about the bonds that the government is constantly placing. True, it is NOT, as always, somewhere in between. In fact, the US government uses every means available to find money when it is needed. In fact, money in the United States is really created out of nowhere, in bank accounts, through various credit schemes, where the government, as it were, borrows money from itself, through the Fed, which, as it were, is not controlled by the President and Congress, but at the same time acts for national purposes. If you greatly simplify this scheme, then money in the United States is really an instrument of control over the economy. If in other countries they are afraid to print money in trillions, since this leads to uncontrolled inflation, which is then very difficult to extinguish, then in the States there is no such problem, because dollars very quickly fly around the world, because it is this currency that remains the main one for the whole world. no matter what you say. Of course, no one prints money unnecessarily. However, at this time, there is a need, so the Fed is printing how many dollars will be needed, and the government is placing bonds with might and main and is going to raise taxes for the rich. And it looks like raising taxes for the rich and corporations will be the tool to remove the extra dollars from the economy. Judge for yourself, if the latest stimulus packages are implemented, then, according to the most conservative estimates, the money supply in the United States will increase by $ 10 trillion. In fact, no one knows the exact numbers, if only because the Fed has a rather vague interpretation of the QE program: at least $ 120 billion a month. 1 trillion is also no less than 120 billion. Thus, the new incentive programs will allegedly be financed from taxes. In fact, the programs that are going to be financed by two new packages will be implemented already in 2021. And when will the money for these programs come from taxes? They will start arriving in 2021, but hardly immediately in the amount of $ 4 trillion. Thus, one way or another, the necessary money will again be created out of thin air. And with the help of the new tax legislation, money will begin to be steadily withdrawn from the economy and sent to the government, which can banally take it out of circulation. Of course, it’s not a fact that everything will be exactly like that. The Fed can technically print dollars endlessly. You need to clearly understand the entire world economy and cash flows in order to assume what can happen at all if the money supply always grows. However, she can do it in theory.

Thus, all the considerations presented above are not in favor of the American currency. Moreover, it is quite possible that the fall in dollar quotes is just the initial stage of the global “anti-dollar trend”. After all, it’s no secret that global trends take 10-12 years. Perhaps now we are just at the beginning of a new uptrend for the euro / dollar pair, which will be observed over the next 8-9 years. 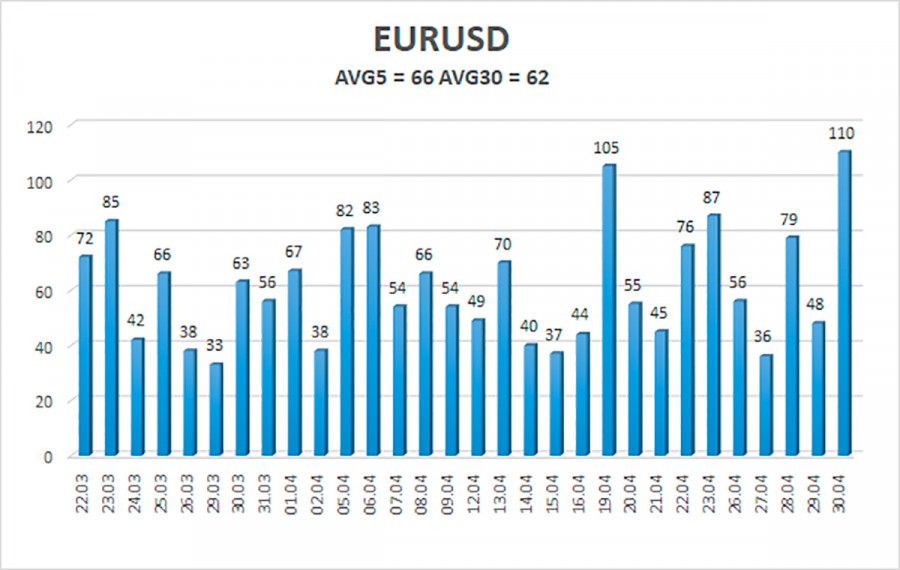 The volatility of the euro / dollar currency pair as of May 3 is 66 points and is characterized as “average”. Thus, we expect the pair to move between the levels of 1.1953 and 1.2085 today. An upward reversal of the Heiken Ashi indicator will signal an upward correction.

Also read  Will the Euro support the US retail sales report?

Forecast and trading signals for the EUR / USD pair for May 3.

Forecast and trading signals for the GBP / USD pair for May 3.