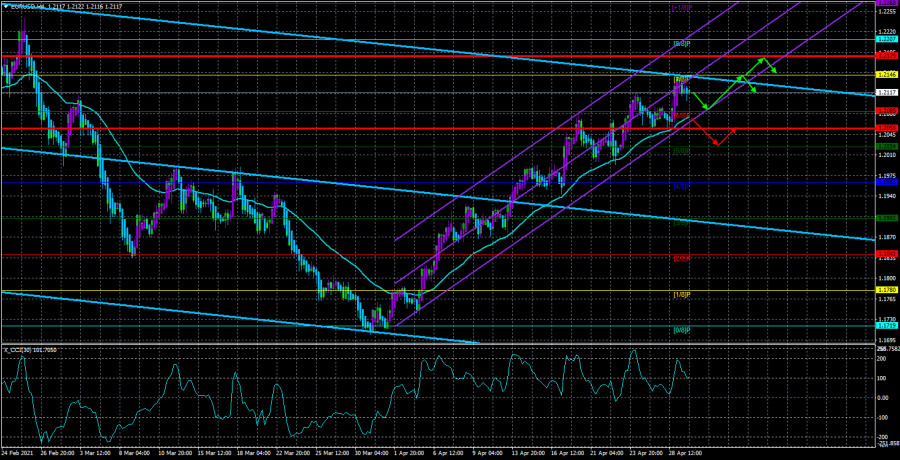 The EUR / USD currency pair on Thursday continued the upward movement for most of the day, which had begun the night before after the Fed announced the results of the meeting, and Jerome Powell spoke at a press conference. Now look closely at the illustration above. The market reaction to the Fed meeting is the last block of purple bars. Do you see any difference between this block and the 7-8 minimum similar before? That is, everything that happened yesterday is just the same upward movement that was observed during the previous three weeks. In other words, after the results of the meeting became known, the markets simply continued the same trading regime as before. Nothing has changed. Moreover, the Fed did not surprise the markets with anything, as the meeting was the most “through”. Nevertheless, the American currency fell again. In total, this process has been going on for almost a month, and during this time the quotes of the pair have added 450 points. It seems to be not very much, but at the same time, not a little, and during this time there were no corrections at all, only pullbacks. Thus, from our point of view, all the factors that really affect the euro / dollar pair at this time have not undergone any changes at all. We still believe that globally, technically, quotes have corrected enough after the 2020 uptrend and have now resumed it. The main reason is the too strong increase in the money supply in the United States, the number of dollars has become corny, which lowers its exchange rate against other currencies, which do not become more or are becoming, but not so much. In recent articles, we also compared the pace of recovery of the US and EU economies and found that by the end of the first quarter, the US economy will already surpass the European economy in recovery, but until that moment, it was the EU economy that retained the leadership, as it lost much less in the second quarter of last year. … Thus, formally, the US dollar may receive a strong support factor in the near future, but the second quarter has already begun, and the US currency has both declined and is declining.

Also read  Analytics and trading signals for beginners. How to trade the EUR / USD currency pair on April 23? Analysis of Thursday's deals. Preparation

We cannot say that much depended on yesterday’s Fed meeting. We immediately warned that Jerome Powell and the company are unlikely to do anything and even want to surprise the markets. The key rate remained unchanged at 0-0.25%, as did the Fed’s rhetoric in the cover letter. The final communiqué stated that the parameters of monetary policy will remain the same until the employment level reaches pre-crisis levels and inflation reaches a stable 2% +. Jerome Powell himself said that the US economy is still far from full recovery, so now there is even no point in talking about a possible curtailment of the quantitative stimulus program or a rate hike. However, no one expected a rate hike, but some traders and experts were still expecting hints of a possible curtailment of the QE program against the backdrop of a rapid economic recovery. We immediately said that this is pointless, since the Federal Reserve will wait for stable high results before tightening monetary policy, and Jerome Powell noted earlier that the regulator will announce the curtailment of the QE program in advance and this will not come as a surprise to anyone. Separately, the final communiqué also spoke about the COVID epidemic, which, according to the regulator, still poses high risks to the economy in the United States and the rest of the world. Thanks to vaccinations and strong incentives, economic and business activity in the US has risen and employment rates have begun to recover, but there are also sectors that have been very severely affected by the pandemic and are still in dire straits, the communiqué said. Inflation has risen, but reflects a short-term outlook, it is too early to draw conclusions. Financial conditions remain favorable, and the further trajectory of economic recovery will depend on the epidemiological situation in the United States. At this time, despite vaccinations, the risks to the economy remain high. Also, the Fed notes that it is not enough to achieve victory over the pandemic in the United States, the economy is also tied to many countries of the world where vaccination has not even begun or is proceeding slowly. Therefore, it is extremely important, according to the Fed, that the whole world is cured of the pandemic. The FOMC reiterated that it will make every effort to support the American economy. Powell once again named the level of maximum employment of the population and inflation at the level of 2% in the long term as goals. Since inflation has recently been well below 2%, the Fed will allow it to accelerate above 2% and stay at that level for a certain amount of time to compensate for periods of low inflation. Here’s a rough summary of what the Fed and Powell said yesterday. What did the traders not know about this? All this information is repeated from time to time by the chairman of the Fed or other members of the monetary committee. Thus, although the US dollar reacted with a fall to the results of the meeting, from our point of view, it would continue to fall in any case.

Also read  How to trade the GBP / USD currency pair on April 27?

From a technical point of view, the situation has not changed at all. The price is still above the moving average line, so the upward trend remains upward, and it is recommended to trade using the “Linear Regression Channels” system for an increase. If the price fixes below the movable in the near future, this will signal the beginning of a downward correction, but as long as the uptrend persists, it should be worked out. Moreover, over the past month, the price has never even tried to form a false breakout of the moving average. 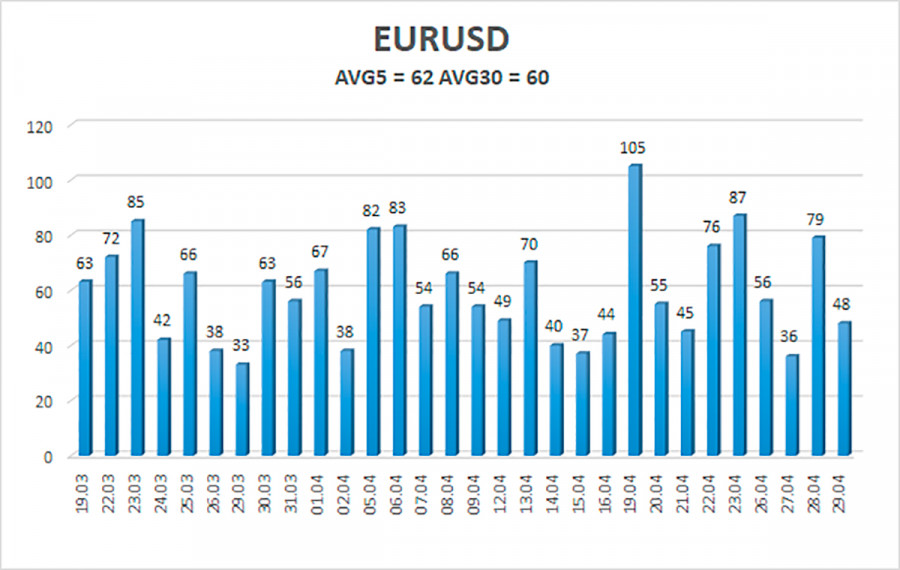 The volatility of the euro / dollar currency pair as of April 29 is 62 points and is characterized as “average”. Thus, we expect the pair to move between the levels of 1.2055 and 1.2179 today. An upward reversal of the Heiken Ashi indicator will signal the resumption of the upward movement.

The EUR / USD pair maintains an upward trend. Thus, today it is recommended to open new long positions with targets at 1.2146 and 1.2179 after the Heiken Ashi indicator reversed upward. It is recommended to consider sell orders if the pair consolidates below the moving average line with a target of 1.2024.

Forecast and trading signals for the EUR / USD pair for April 30.

Forecast and trading signals for the GBP / USD pair for April 30.