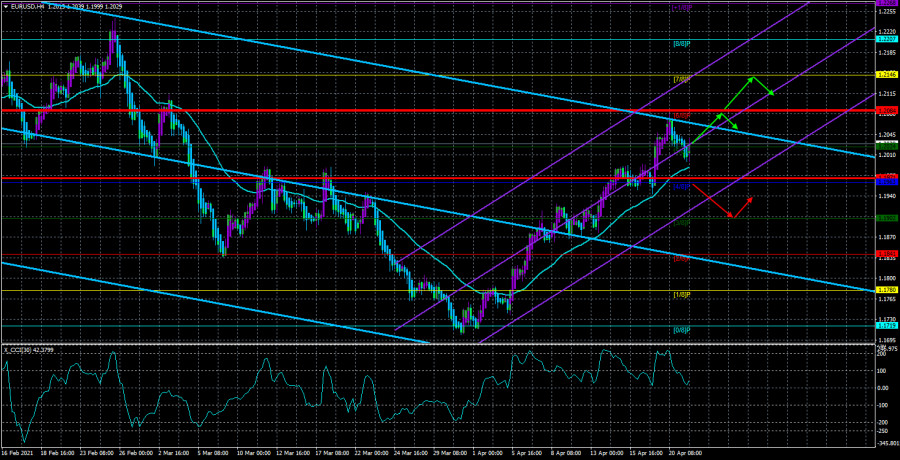 The EUR / USD currency pair started a round of corrective movement on Wednesday. Considering the fact that the pair has gone almost without a single rollback over the past two weeks, almost 400 points upward, a correction has been brewing for at least several days. At this time, the only question is how strong this correction will be. We continue to insist that the pair has already resumed the global uptrend. First, based on technical factors. Second, based on the “global fundamental factor” about flooding the American economy with trillions of dollars. Thus, even if now the euro / dollar pair falls by 100-200 points, it will not change anything. After the completion of the correction, we will expect the uptrend to resume. As for other fundamental and macroeconomic factors, now there is nothing to pay attention to. There are no strong and important fundamental factors at all, no macroeconomic statistics were published in the first three days of this week. Thus, traders now simply have nothing to react to.

Since no important information is currently coming to the markets, most traders and analysts try to “explain” the current movement of the pair with anything. We would like to immediately remind you of how the foreign exchange market works in general. First of all, it is mainly focused on large players: various banks, corporations and brokers. Thus, these financial institutions, which are driving the foreign exchange market, generally do not need a fundamental background or macroeconomic statistics in order to make transactions. Buying / selling a particular currency does not only take place in order to make a profit from it. Currency is bought for international settlements, for investments, for trade operations. Also, the currency can be bought for the reserves of the central bank and many more for what purposes. Thus, if, for example, the Central Bank of Russia now needs to buy 2 billion dollars, it is unlikely to wait for the moment when the US dollar will fall in price as much as possible. Of course, one cannot deny the influence of the fundamental background and statistics on the exchange rate formation of any pair. Indeed, there are also large speculators on the market (the same banks and other financial structures, but who perform foreign exchange operations in order to make a profit). However, in no case, if the pair is now moving in one direction or another, this does not mean that there is any fundamental factor that is the cause of what is happening. We remind you that the rate of any currency is the ratio of supply and demand for this currency. This is why we believe that the US dollar will continue to depreciate in 2021. Because the dollar supply is growing because of all the stimulus packages from the US government and the Fed. Thus, if the dollar is depreciating now, this does not mean that the fundamental background in the US is now bad and / or in the European Union it is now good. This may mean that the demand for the dollar has decreased in recent weeks or the demand for the euro has increased. Or that the supply of the dollar has increased and / or the supply of the euro has decreased. This is how it works. Therefore, all explanations that the dollar is currently falling due to declining yields on US Treasury bonds are just an attempt to “explain” what is happening. The pair can move with any strength and in any direction, even without “foundation” and “macroeconomics”. And technical analysis is a type of analysis that visualizes the behavior of the markets. He does not play ahead of the curve, he only shows what changes have already taken place. Therefore, when there is no “foundation”, special attention should be paid to the “technique”.

Also read  How to trade the EUR / USD currency pair on May 25?

Almost the only important event of the week will take place tomorrow. This event is a meeting of the ECB, from which almost no one in the market expects anything special and interesting. None of the market participants doubts that the rates will remain unchanged, since the ECB representatives did not give any signals for such expectations. Most likely, the general rhetoric of the ECB leadership will not change either. Until inflation approaches a stable 2 +% in the medium term, there can be no talk of tightening monetary policy. As for the further easing of monetary pressure, no changes are expected here either. The rates are unlikely to be cut further. Recall that the ECB’s deposit rate is already -0.5%, which, of course, negatively affects the income of banks, as well as for everyone who wants to place a deposit. The same goes for the PEPP program, an emergency asset purchase program designed to mitigate the negative impact of the pandemic and the crisis it caused. Its volume is 1.85 trillion euros, and the timing assumes a monthly repurchase of assets until the end of March 2022. However, already now many experts say that, if necessary, the volume will be expanded and the terms of the program will be extended. As for the leading macroeconomic indicators, the unemployment rate in the EU remains quite high and may continue to grow in the next 12 months. Economic growth remains weak: a 0.7% qoq contraction was recorded in Q4 2020; a 1.2% qoq contraction is expected in Q1 2021. Growth is expected only in the second quarter of 2021, but it will entirely depend on the strength of the third “wave” of the pandemic, which has already begun in some EU countries, and its consequences for the economy. In general, most likely the greatest interest among traders will be caused by the press conference with Christine Lagarde, and not the results of the ECB meeting. And what can the head of the ECB tell us? Her recent speeches made it clear that she does not currently have a high opinion of the bloc’s economy and the pace of its recovery. Therefore, one should hardly expect any optimistic statements from her. Consequently, the European currency is unlikely to receive support from the ECB. However, she does not need it, because now other factors affect the exchange rate of the euro / dollar pair. 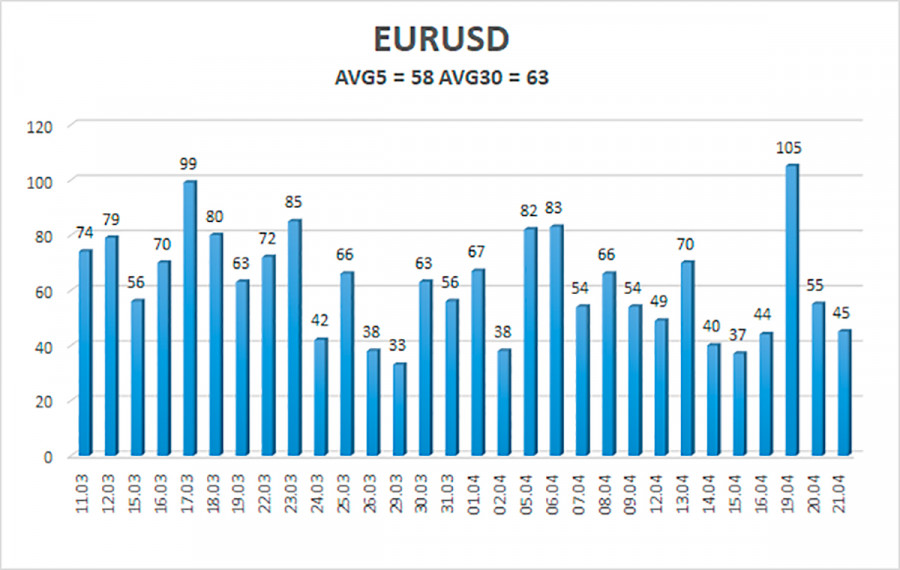 The volatility of the euro / dollar currency pair as of April 22 is 58 points and is characterized as “average”. Thus, we expect the pair to move between the levels of 1.1971 and 1.2087 today. A reversal of the Heiken Ashi indicator back upward will signal the resumption of the upward movement.

The EUR / USD pair maintains an upward trend, but is correcting at this time. Thus, today it is recommended to open new longs with targets at 1.2084 and 1.2146, if the Heiken Ashi indicator turns upwards or the price bounces off the moving average. It is recommended to consider sell orders if the pair consolidates below the moving average line with targets at 1.1902 and 1.1841.

Also read  Plan for the American session on April 29 (analysis of morning deals). The bulls failed to break above the high of 1.3970,

Review of the GBP / USD pair. April 22. How much money have been printed since the start of the pandemic by the Central Banks of England, the United States and the European Union?

Forecast and trading signals for the EUR / USD pair for April 22.

Forecast and trading signals for the GBP / USD pair for April 22.