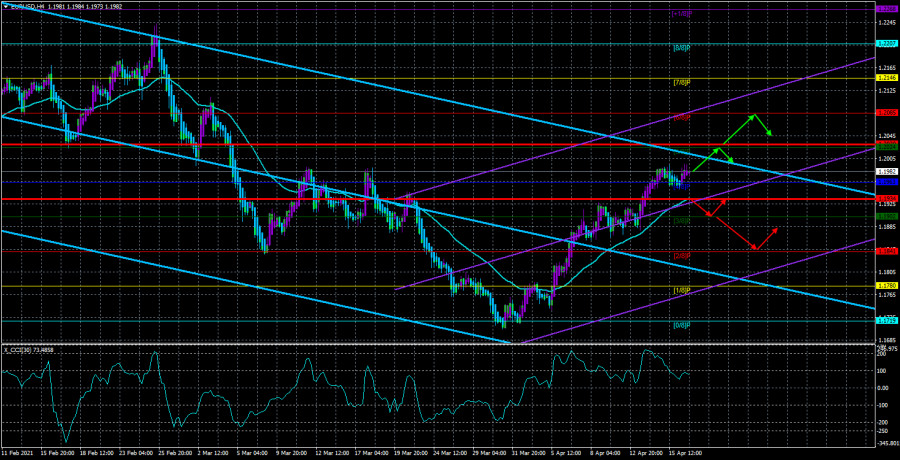 The EUR / USD currency pair finally “died” on Friday and traded even without a definite direction. Basically, the illustration below clearly shows how volatility has been falling in recent days. On Friday, this figure was only 44 points. Thus, nothing in the technical picture has changed during the last trading day of the week. The price is still above the moving average line, so the upward trend continues. So far, it takes only 2 weeks, but we continue to count on the resumption of the global uptrend. That is, we expect that the upward movement of the euro / dollar pair will continue in the coming months. We have already spoken about the reasons for such conclusions many times. In short: the American economy continues to pump up trillions of dollars, which causes inflation in the United States and the depreciation of the national currency. In Europe, they go the other way and do not print money in trillions. Therefore, the money supply in the European Union is growing much weaker. Therefore, the European currency also gets an advantage. It depreciates more slowly than the dollar. By the way, we have already spoken about the paradox. Despite the fact that the euro is becoming more expensive in the long term, the European economy is recovering slowly, and the very fact that the euro is growing is not very beneficial for the European Union. Christine Lagarde and ECB chief financier Philip Lane spoke about this several months ago. In the States, the paradox is reversed. The economy is growing rapidly, but the US dollar is declining, which is very beneficial to America. If you remember, Donald Trump has repeatedly stated that the United States does not need an “expensive” dollar, as this greatly complicates the process of servicing the public debt and makes American goods less competitive in international markets.

The fundamental background for the couple has been quite contradictory lately. On the one hand, there is news. On the other hand, what difference does it make if the markets don’t pay much attention to them? Well, Christine Lagarde and Jerome Powell performed last week. The first one spoke about the poor state of the EU economy, the second – about the good pace of the US economic recovery, so what? All the same, the euro continued to rise in price. We believe that the issue is not in the fundamental background at all. The factor of strong growth in the money supply in the United States overlaps both the “macroeconomics” and the “foundation”. Thus, absolutely all news now has only a local impact on the movement of the pair. Yes, for example, the inflation report comes out and the US dollar is under additional pressure. But in general, news and reports do not affect the euro / dollar pair to such an extent as to change its trend. And the trend, if someone does not remember, remains upward in the long term. We generally consider all news such as vaccinations in the EU and the USA or the growth in the yield of government treasury bonds to be absolutely insignificant for the foreign exchange market. It is clear that the lower the rate of vaccination of the population in the European Union, the longer the economy will recover. Longer and slower. But why should market participants react now to news about the rate of vaccination, if it is possible, in fact, to react to specific macroeconomic indicators for a given period? Thus, the entire fundamental background now, in fact, exists so that traders are simply aware of what is happening in the world.

According to the latest information, the EU authorities decided to abandon cooperation with pharmaceutical companies AstraZeneca and Johnson & Johnson in the future and not order more vaccines from them. Recall that it is the vaccines of these companies that are believed to cause blood clots. Of course, we are talking about only a few cases of blood clots per millions of vaccinations given. However, the popularity of these vaccines is declining, but confidence in the Pfizer / BioNTech and Moderna vaccines, which the European Commission plans to focus on in the coming years, is growing.

Meanwhile, the European Commission released a message according to which the organization’s plans to raise 750 billion euros over the next five years to finance the recovery of the Eurozone economy after the coronavirus pandemic were disclosed. The same Economic Recovery Fund. The European Union plans to raise funds by issuing government bonds for a period of 3 to 30 years. The first bonds are planned to be issued in July, and their sale will begin in September. Brussels expects that short-term bills will help raise funds in the early stages, and bonds will be placed through auctions. All funds raised will be distributed among the EU countries in the form of grants and concessional loans. Thus, the EU economy will begin to accelerate earlier than the summer of 2021, or rather even closer to autumn. Of course, this does not mean that GDP growth will be zero in the first and second quarters. Most likely, it will be negative. It is already known that in the first quarter, most likely, a drop of 1.2% will be recorded, and in the second – it is still difficult to say, given the third “wave” of the epidemic in some EU countries and problems with vaccination of the population.

As a summary, we believe that nothing will change the general market sentiment in the near future. Yes, it is quite possible that a change in market sentiment will not be needed, since the euro currency is growing due to an imbalance in the money supply of the EU and the USA. What difference does it make as most traders do if the amount of dollars increases too quickly? COT reports have shown for 5 months that the European currency should start a downtrend. However, this does not happen. Thus, the entire “foundation” and “macroeconomics” can only have a short-term impact on the movement of the euro / dollar pair. And given that the volatility of the pair has dropped to its minimum values ​​again, we still need to wait for important news and reports to influence the movement of the pair.

Also read  How to trade the EUR / USD currency pair on April 20? 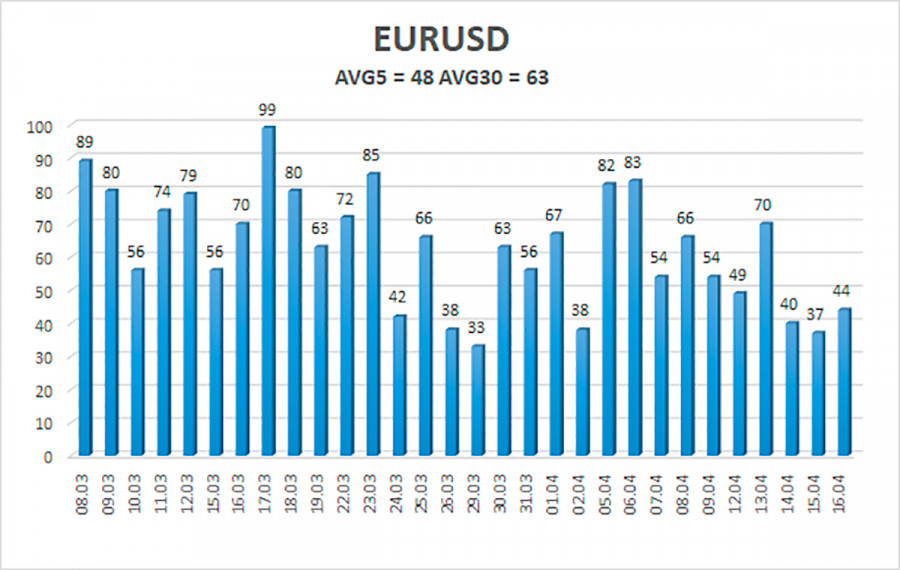 The volatility of the euro / dollar currency pair as of April 19 is 48 points and is characterized as “average”. Thus, we expect the pair to move between the levels of 1.1934 and 1.2030 today. A downward reversal of the Heiken Ashi indicator will signal a new round of correction.

Review of the GBP / USD pair. April 19th. The Scottish National Party has officially promised an independence referendum by the end of 2023.

Forecast and trading signals for the EUR / USD pair for April 19.

Forecast and trading signals for the GBP / USD pair for April 19.