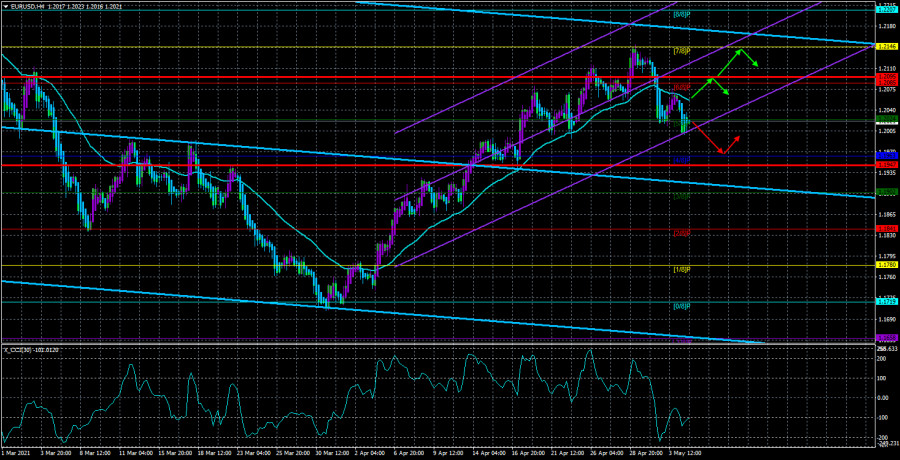 The EUR / USD currency pair on Tuesday continued to trade as expected. We said over the weekend that it would be nice to correct after Friday’s drop. And so it happened on Monday. On Monday, we said that after an upward rollback, the correction is likely to resume, since the uptrend that preceded it was 450 points and took exactly 1 month. Thus, a correction of 100 points in one day is frankly not enough. Thus, at the moment, the correction continues, although more globally, the technical picture has not changed at all. We have talked about how things are with the euro / dollar pair many times. After a strong uptrend in 2020, the pair corrected during the first 3 months of 2021, after which it probably completed the correction and began a new round of the uptrend, which we saw in the last month. Now, we look forward to the completion of the downward correction this week and the resumption of the uptrend. The fundamental reasons also remain the same. And they seem to be supporting the European currency and putting pressure on the dollar for a long time to come, as the US money supply continues to swell and this process is likely to continue in 2021. At least now all the data are in favor of just such an option. Joe Biden proposed two new stimulus packages at once, one of which will be aimed at “social needs”, and the second – at infrastructure. While it is now implied that both stimulus packages will be funded through tax increases for wealthy Americans and multicorporations, we all understand that it can take several years to collect about $ 4 trillion in taxes. Thus, most likely, this money will again be attracted through loans and from the Fed or in any other way, which absolutely does not change the essence of the matter. Money doesn’t come out of thin air. They are either created in central bank accounts or printed by the central bank. Therefore, all paths in any case lead to the Fed.

What can at least theoretically affect the euro / dollar pair, apart from the global fundamental factor? We have recently analyzed the pace of recovery in the US and EU economies and found out that the American one has already recovered stronger than the European one since the beginning of the pandemic. In theory, the US dollar can get support from this factor. In practice, we believe that this is a utopia. The factor of creating trillions of dollars out of nowhere is much more global and important. Thus, if nothing fundamentally changes in the “foundation” in the near future, then, most likely, the dollar depreciation in 2021 will continue.

And what about the European Union? Nothing interesting is happening in the European Union now. Problems with vaccinations and orders for the supply of vaccines seem to have been resolved. This did not speed up the vaccination process too much, but it still became a little calmer. At least all the media stopped writing daily about AstraZeneca and the disruption of supplies to the European Union. And also about the claims of many Euro-states against the European Commission. Everyone is waiting for the Recovery Fund to start forming, and then everyone will be waiting for its distribution this summer. Macroeconomic statistics in the European Union have improved slightly recently. This primarily concerns business activity and inflation. However, as the latest statistics have shown, inflation is only growing at the core level, while the basic one (excluding prices for fuel and food), on the contrary, is decreasing and is now less than 1%. At the same time, the unemployment rate remains quite high – 8.1%, GDP – negative in the first quarter of 2021. Thus, the European Union simply does not have any special reasons for joy now. But all this news has nothing to do with the European currency rate, which is currently only 300 points away from the 2.5-year highs reached at the junction of 2020 and 2021. And this is taking into account the drop in quotations by 100 points in recent days. Thus, there is simply no correlation between macroeconomic statistics and the euro / dollar exchange rate. Of course, macroeconomic reports can have a local influence, but only local, in the context of one day. And there are no global changes, as we have already said.

Jerome Powell, Fed Chairman, has already delivered a speech this week. However, he did not report anything new to the markets. In an interview with Fox, Powell said the outlook for the US economy has improved recently, but the recovery is still uneven. He praised the positive impact of vaccinations and fiscal stimulus on economic recovery. Thus, most likely this week the correctional movement of the pair will continue, which may continue up to the level of Murray “3/8” – 1.1902. 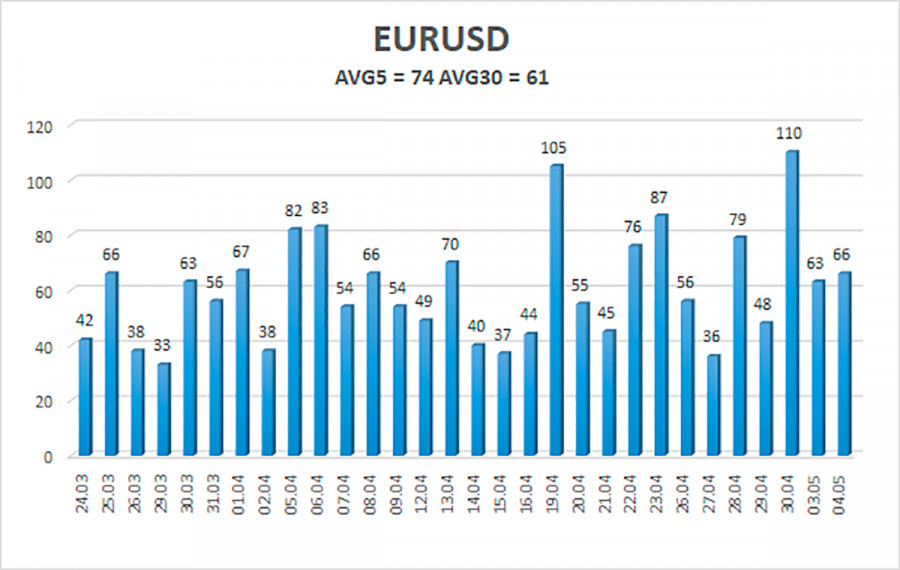 The volatility of the euro / dollar currency pair as of May 5 is 74 points and is characterized as “average”. Thus, we expect the pair to move between the levels of 1.1947 and 1.2095 today. An upward reversal of the Heiken Ashi indicator will signal a new round of upward correction.

The EUR / USD pair has consolidated below the moving average and continues its downward movement. Thus, today it is recommended to stay in short positions with targets at 1.1963 and 1.1947 until the Heiken Ashi indicator reverses upward. It is recommended to consider buy orders if the pair consolidates above the moving average with targets at 1.2095 and 1.2146.

Review of the GBP / USD pair. 5 May. Tomorrow is an important day for the UK and the British pound.

Forecast and trading signals for the EUR / USD pair for May 5.

Forecast and trading signals for the GBP / USD pair for May 5.