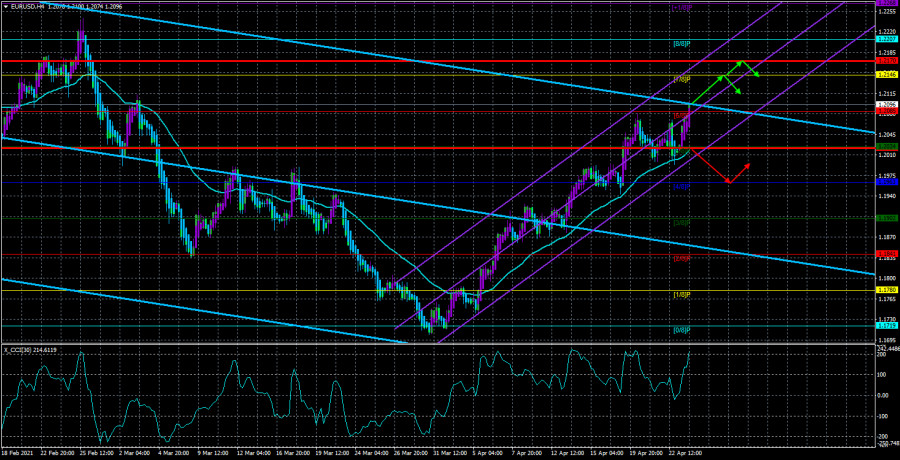 The EUR / USD currency pair continued its upward movement on Friday, April 23rd. In total, quotes have continued to grow for almost a month, and during all this time there has not been a single intelligible rollback or correction. From our point of view, this is a very remarkable moment, since such noncorrective movements do not happen very often. Consequently, the European currency is growing under the influence of some strong and stable factor over time. We have already talked more than once about the factor of pumping the American economy with trillions of dollars. Unfortunately, this factor can work against the dollar for a long period of time and all this time we will have to draw the attention of traders to this factor. We would like to write now that in such and such a week the euro grew due to some factors, and in another – due to others. But objective reality shows that this factor is most likely one. Thus, a new uptrend is emerging at this time. If you look at the older timeframes, it becomes clear that the euro / dollar pair corrected well in the first three months of 2021, so there are technical grounds for resuming the trip to the North. Also, global macro factors, such as the frequency of global trends, are starting to work here. For example, the past downtrend started in August 2008 and ended (presumably) in January 2017. The previous uptrend started in October 2000 and ended in August 2008, respectively. The previous downtrend started in March 1995 and ended in October 2000. Thus, the global trend usually takes 5-6 to 9-10 years. If we assume that the global downtrend ended in 2017, then the next 6 years at least will be the “era of the European currency”. Of course, these calculations show that three full years of the next cycle have already ended. However, there are still at least three, or even all 5-6 years left. And this is another factor in favor of the long-term appreciation of the European currency.

Meanwhile, Joe Biden and his government continue to do their utmost to keep the US currency down. Of course, it can hardly be said that all the actions of the US government (starting from Donald Trump) are aimed precisely at weakening the dollar. However, the weakening of the national currency may be one of Washington’s global goals. Recall that Donald Trump was a much more eloquent and public president than Joe Biden. He often spoke and always said what he believed and thought, without worrying about the consequences. Trump said that the United States needs a “cheaper” dollar, as this will increase the competitiveness of American goods in international markets, as well as simplify the task of servicing public debt, which, recall, in the United States is approaching the $ 30 trillion mark. Thus, it is quite possible that, in part, Washington is purposefully pursuing the goal of depreciating the dollar, which in time coincided with the global crisis and the pandemic that caused it. Now let’s try to determine the approximate goals of the new global trend. During the first downtrend (1995-2000), the euro fell by 63 cents. During the second uptrend (2000-2008), the euro gained 78 cents. During the third downtrend (2008 – 2017), the euro fell by 56 cents. Thus, at this time, we can conclude that the global trend is a movement of at least 50 cents. If a new uptrend really began in 2017, then its minimum target is located at a distance of 50 cents (5000 points) from the beginning of the trend. Accordingly, the approximate target is $ 1.53. At the moment, the rate is $ 1.21, which gives us a potential movement of 3200 points over the next few years. What’s interesting is that the previous trend ended in 2008, during the mortgage crisis, which also swept the whole world. Now the trend ended in 2017, but in 2020 the quotes were falling to almost the 2017 low, so we can partly conclude that the previous downtrend also ended during the global crisis. Thus, from our point of view, the likelihood that a new long-term uptrend has begun is indeed high.

Of course, global fundamentals should never be overlooked. If, for example, tomorrow the European Union gets involved in a destructive military conflict, then it will be very difficult for the European currency to show growth. That is, from a technical point of view, the trend has already begun, but only very global fundamental factors of world significance can break it. So far, there are none on the horizon, so we still expect long-term growth of the European currency. Although the current fundamental background and macroeconomic statistics speak against this.

Of the more local factors that will affect the movement of the euro / dollar pair in the near future, there is nothing special to single out now, since all of them have long been taken into account by the market. Perhaps, if the United States raises taxes for rich and large corporations, this will lead to an outflow of capital from the country, which, of course, will affect both the development of the economy and the state of the stock market. But this will only support the fall of the American currency, which is already falling. But the factors that could turn the trend down, in favor of the dollar, are now not visible. The recovery of the US economy at a high rate is completely neutralized by the factor injecting trillions of dollars into this very economy. The epidemic in the United States and the European Union has already faded into the background, as most of the macroeconomic indicators are recovering. Business activity is growing even though people are still getting infected and dying. But not on the same scale as before. Of course, vaccination plays a role. 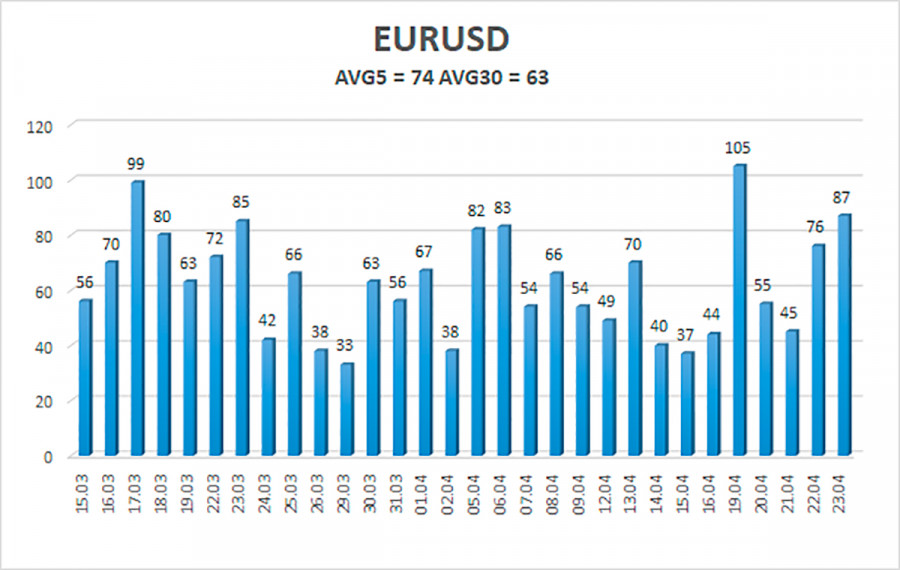 The volatility of the euro / dollar currency pair as of April 26 is 74 points and is characterized as “average”. Thus, we expect the pair to move between the levels of 1.2022 and 1.2170 today. A downward reversal of the Heiken Ashi indicator will signal a new round of downward correction.

Review of the GBP / USD pair. 26 April. The future of Great Britain remains as hazy as the weather itself in the Kingdom.

Forecast and trading signals for the EUR / USD pair for April 26.

Forecast and trading signals for the GBP / USD pair for April 26.