Major US stock indexes in the US fell sharply on Tuesday, and their decline was observed for the second day in a row. Market participants studied the financial statements of a number of large American companies, which turned out to be slightly worse than expected regarding the prospects for profit growth. Also, pressure on US and Asian stock indices was exerted by the deteriorating situation with the coronavirus, which increased fears that the spread of the coronavirus outside the United States could impede the recovery of the global economy and worsen the profit growth prospects of American multinationals.

The rise in the number of new cases of coronavirus infections around the world and the weakening of the US stock market have increased the demand for defensive assets, in this case for gold and the dollar. The DXY dollar index rose on Tuesday and continues to rise on Wednesday.

As of this writing, DXY futures are trading near 91.34, 50 pips above yesterday’s low of 90.84 hit during the Asian session. At the beginning of today’s European session, the yield on US 10-year government bonds is also growing after the decline the day before, which also supports the dollar.

At the same time, it is too early to bet on a significant strengthening of the dollar in the current environment, economists say. The Fed tends to keep interest rates low for several years, at least until the end of 2023, in order to support the economy and the labor market. At the same time, taxes on corporate profits in the United States are likely to be raised soon, so investors will increasingly invest their capital in the economy and assets of other countries, which will create additional conditions for a weakening dollar.

Nevertheless, the dollar is strengthening today against the main currencies-competitors in the foreign exchange market, except, perhaps, the Canadian dollar, which remains stable on the eve of the meeting of the Bank of Canada. It will end today with the publication of the interest rate decision at 14:00 (GMT).

The Canadian currency is still supported by rising oil prices and strong Canadian labor market report for March, released earlier this month. A report from Statistics Canada reflected a sharp decline in the country’s unemployment rate from 8.2% to 7.5%, which was significantly better than market expectations of 8%. The number of employed in Canada also increased sharply in March (by 303,100 people), which is better than the forecast of +100,000 and the result of the previous month of +259,200.

Considering the increased attention of central banks, including the Bank of Canada, to the national labor market, the bank’s management may make statements about considering the possibility of an early start to curtail the bank’s stimulating policy, which will cause a sharp rise in CAD quotes.

The Bank of Canada press conference will begin at 15:15 (GMT), and market participants will closely follow the press conference. No changes in the parameters of the current monetary policy are expected, but market participants want to hear the Central Bank’s comments on the current economic situation in the country and on the prospects for monetary policy. The harsh tone of the accompanying statement by the Bank of Canada on rising inflation and the outlook for monetary policy will cause the Canadian dollar to strengthen.

Canada’s GDP grew 5.6% in the first quarter of 2021, according to a recent Reuters poll of economists. Forecasts for subsequent quarters of this year ranged from 6% to 3.5%.

Meanwhile, there are concerns among economists that a new wave of COVID-19 and tightening restrictions could slow the recovery of the Canadian economy. Therefore, maintaining a soft monetary policy by the Bank of Canada is still necessary. If the Bank of Canada today signals the need for a soft monetary policy, the Canadian currency is likely to decline, and the pair USD / CAD, respectively, will rise.

In the meantime, USD / CAD is trading at the beginning of the European session in the middle of the ascending channel on the daily chart, near the level of 1.2595, through which a strong resistance level also passes (see Technical analysis and trading recommendations).

Also, volatility in the USD / CAD pair may be caused by the publication at 12:30 (GMT) of data on consumer inflation in Canada for March. According to the forecast, the consumer price index in March accelerated to + 0.6% from + 0.5% in February. On an annualized basis, the CPI is expected to rise by + 2.3% (versus + 1.1% in February). This is a positive data for CAD. The inflation target for the Bank of Canada is in the range of 1% -3%. The rise in CPI is a harbinger of a rate hike and a positive factor for CAD. If the data for March turns out to be worse than the previous values, it will negatively affect the CAD. Better-than-forecast data will strengthen the Canadian dollar.

As we noted above, at the time of this article publication, USD / CAD is trading near the resistance level of 1.2595 (ЕМА50 on the daily chart). 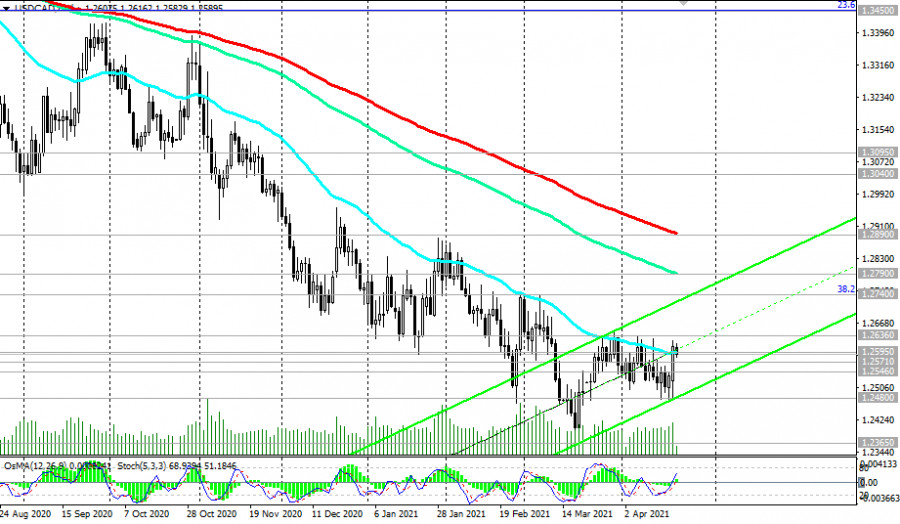 Since March last year, USD / CAD has been in a steady downtrend. However, it should be noted that the indicators OsMA and Stochastic on the 4-hour, daily, weekly charts turned to long positions. 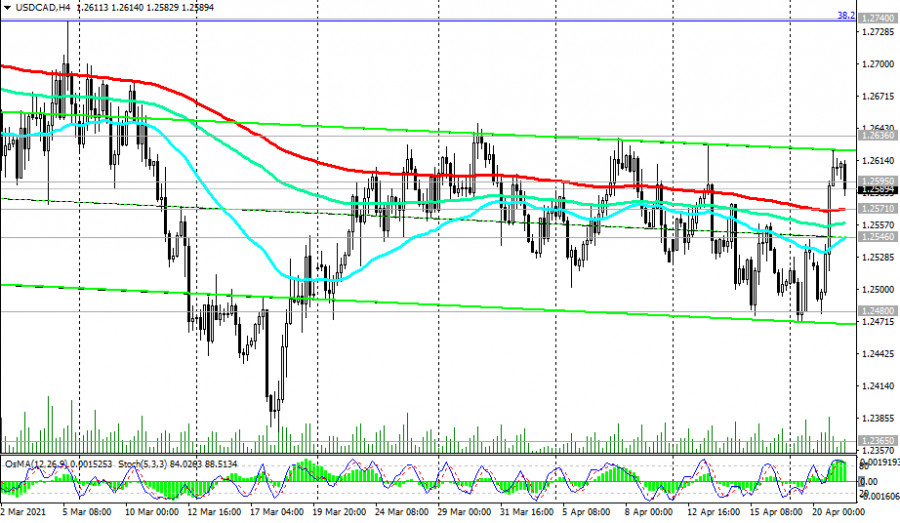 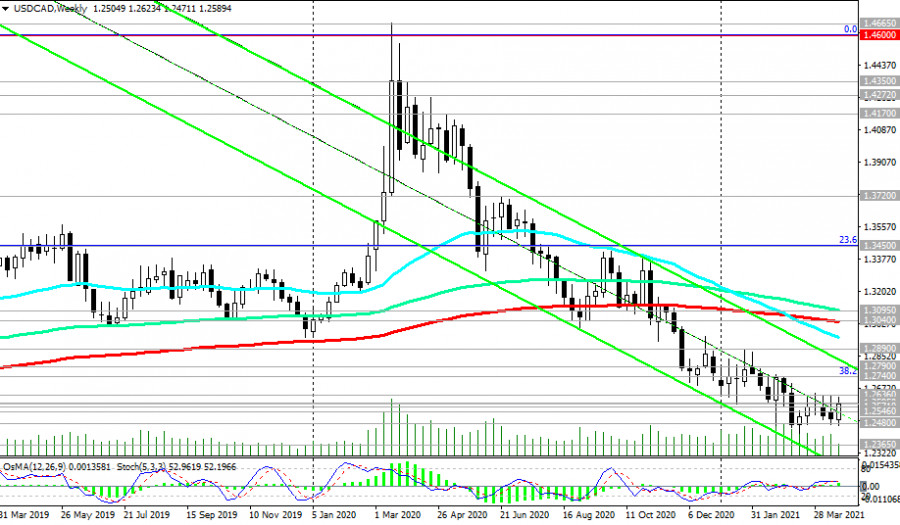 At the same time, USD / CAD is trading in the area above the important short-term support levels 1.2571 (ЕМА200 on the 4-hour chart), 1.2546 (ЕМА200 on the 1-hour chart), trying to develop positive dynamics within the upward channel on the daily chart. 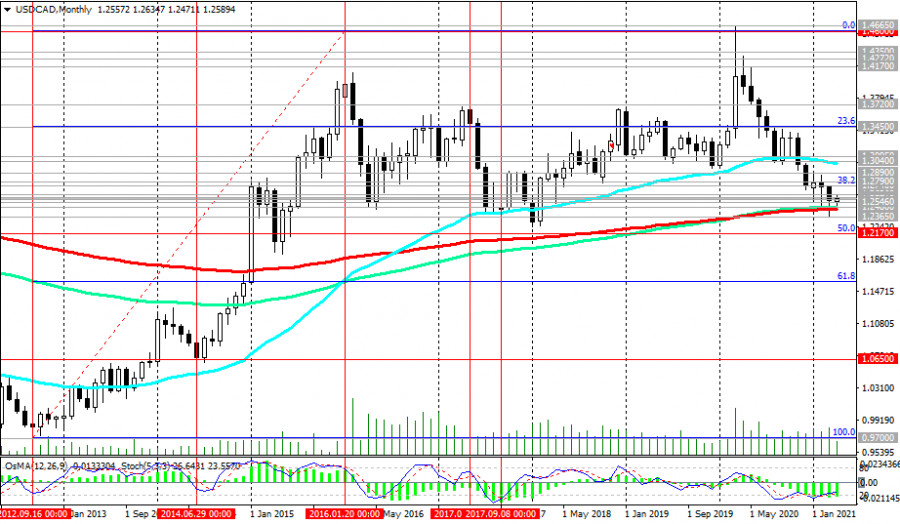