The Bank of Canada yesterday unexpectedly announced a slowdown in bond purchases due to improved economic outlook. Bank executives on Wednesday left the key interest rate unchanged at 0.25%, while saying that the key rate hike could happen faster than previously thought.

The unconditional focus of traders’ attention today is the ECB meeting. Considering yesterday’s statements by the Bank of Canada, which caused a sharp increase in volatility in the financial market, today market participants will closely follow the ECB meeting. Probably, following the results of this meeting, the key interest rate of the ECB will remain at the same level of 0%. The ECB’s rate on deposits for commercial banks is also likely to remain at -0.5%. It is also unlikely that the ECB will make important statements following today’s meeting. Most likely, ECB leaders will prefer to take a wait and see attitude, at least until the publication in June of the quarterly report on financial conditions and inflation prospects.

Now inflation in the Eurozone is stubbornly holding around 1%, and the new forecasts of the ECB on rates and the QE program can be seen as a signal of the inclination to further soften the policy. After Brexit, trade conflicts, factors of political instability in Europe, as well as the growing coronavirus pandemic, due to which European countries are forced to introduce new quarantine restrictions that negatively affect economic activity, are the main threats to the European economy.

And yet there is a possibility that at this meeting the ECB will announce a new program to stimulate the economy, which will put pressure on the euro.

The ECB decision on rates will be published at 11:45 (GMT), and at 12:30 the ECB press conference will begin, which will be of the main interest for market participants, and during which a surge in volatility is possible not only in euro quotes, but also in the entire financial market if the ECB leaders make unexpected statements. ECB leaders will assess the current economic situation in the Eurozone and comment on the ECB’s rate decision. In previous years, based on the results of some ECB meetings and subsequent press conferences, the euro exchange rate changed by 3% -5% in a short time. Most likely, following the meeting, the head of the ECB Christine Lagarde will again signal the bank’s propensity to a soft policy. The soft tone of her statements will have a negative impact on the euro. Conversely, a tough tone from ECB officials on central bank monetary policy will strengthen the euro.

Also read  The likelihood of a rise in the price of gold above historical highs!

However, a minor adjustment to the ECB’s asset purchases program will probably not have a strong impact on the euro and the EUR / USD pair, the direction of which will depend on other factors, and above all on the dynamics of the dollar. In the meantime, the dollar is showing a tendency to further weakening amid continuing decline in the yield of US government bonds.

Immediately after the publication of the ECB’s decision on rates, the US Department of Labor will publish (at 12:30 GMT) weekly data on the labor market. It is expected to increase the initial claims for unemployment benefits in the reporting week to 617,000 from 576,000 earlier.

The data suggests that the full recovery of the American labor market, badly hit by the coronavirus pandemic, is still a long way off. According to some economists, the labor market needs to recover by another 25% to reach normal levels. The worsening epidemiological situation in many regions of the world due to the increase in the number of cases of COVID-19 casts doubt on previous forecasts regarding the pace of global economic recovery. In these conditions, the FRS, most likely, will not soon begin to tighten its monetary policy.

Also read  The secret of the firm: why the shares of the bankrupt company Hertz have risen in price by 40% in a day

All of these are negative factors for the USD. Given the greatest influence of the policy of the American central bank (in comparison with other major world central banks) and the dynamics of the dollar on the global financial market, the EUR / USD pair is most likely to maintain a tendency to further growth, at least until the Fed meeting on April 27-28. …

According to many economists, the dollar’s sustained growth, including against the euro, is unlikely as long as US yields remain subdued and the European economic outlook is improving as a result of accelerated vaccination rates, while the Fed’s soft policy will put pressure on the dollar. The dollar also reacts less and less with growth to strong data on the US economy, since many positive data have already been taken into account in quotations. Combined with the Fed’s soft policy amid rising inflation, this will put downward pressure on the dollar.

At the time of publication of this article, the EUR / USD pair is trading near the 1.2025 mark, remaining in the bull market zone and maintaining positive dynamics above the key support levels 1.1845 (ЕМА200 on the daily chart), 1.1915 (ЕМА144 on the daily chart). 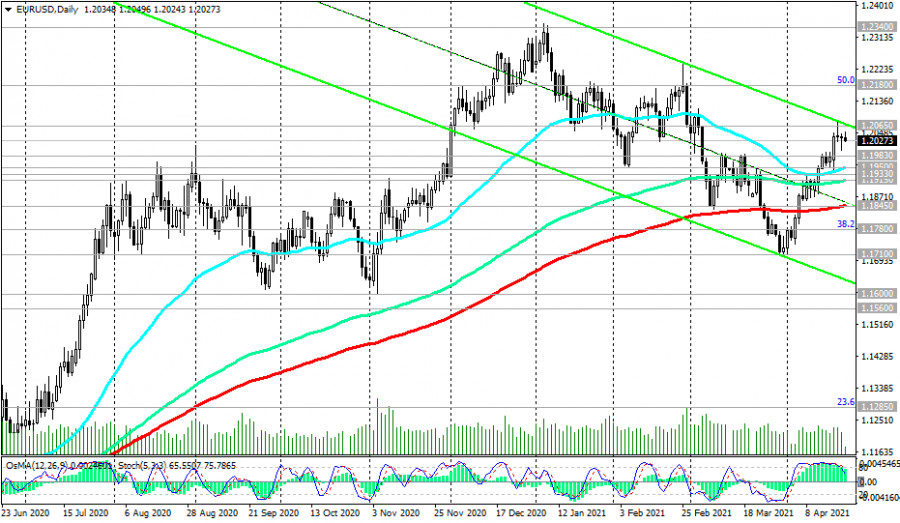 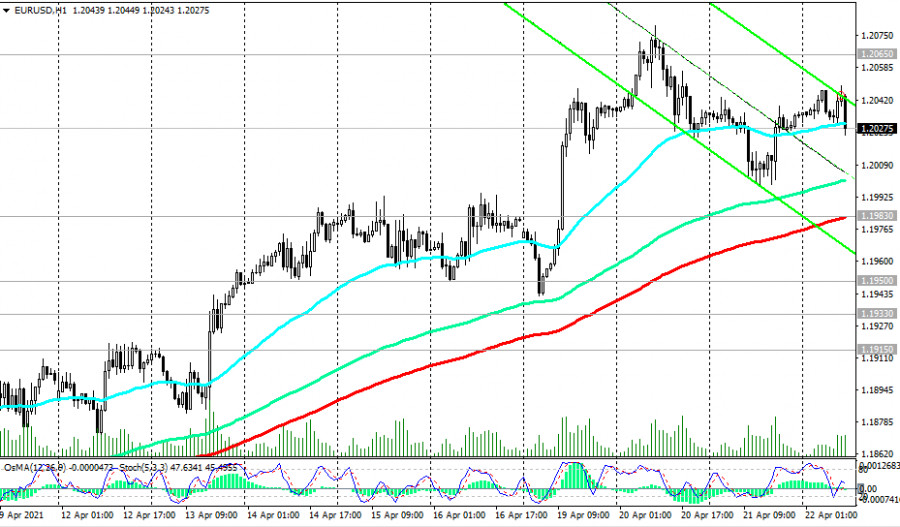 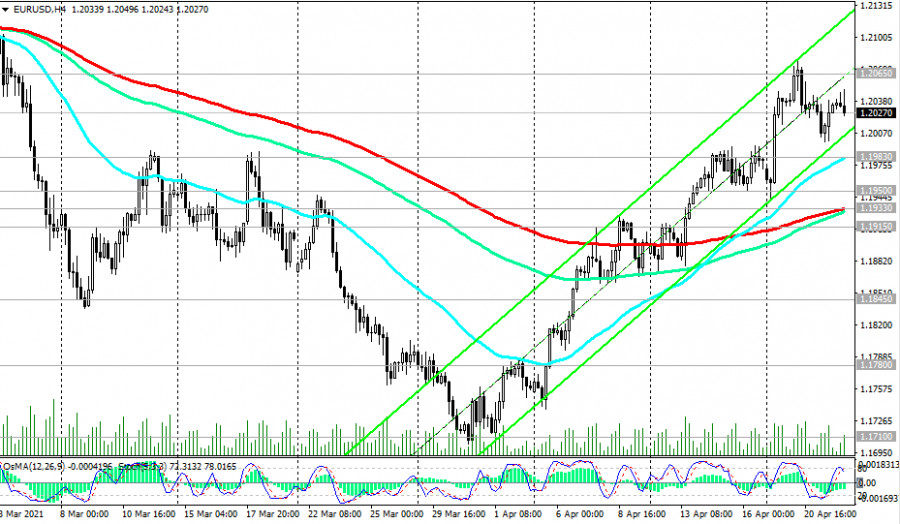 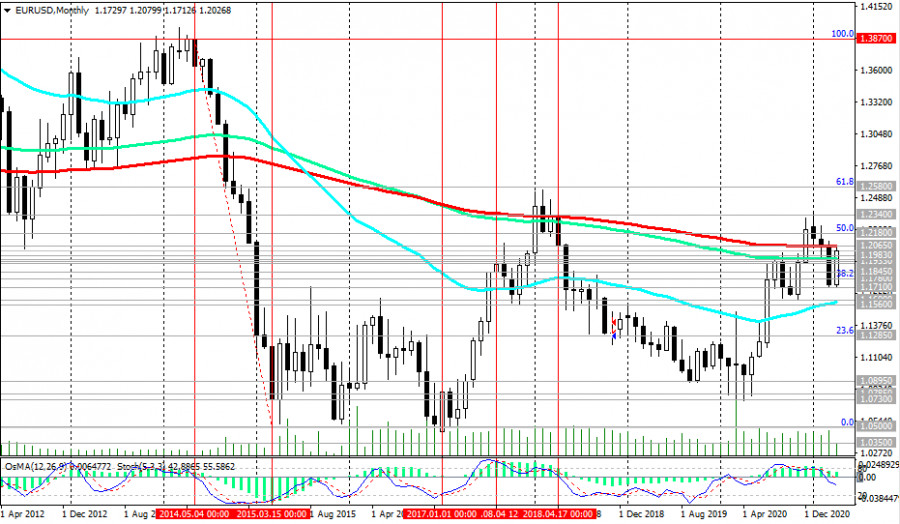 In an alternative scenario and after the breakdown of the support level 1.1950 (ЕМА50 on the daily chart), EUR / USD will resume its decline into the descending channel on the daily chart. Its lower border is near 1.1600, 1.1560.

The first signal for the implementation of this scenario will be a breakdown of the short-term support level of 1.983 (ЕМА200 on the 1-hour chart). 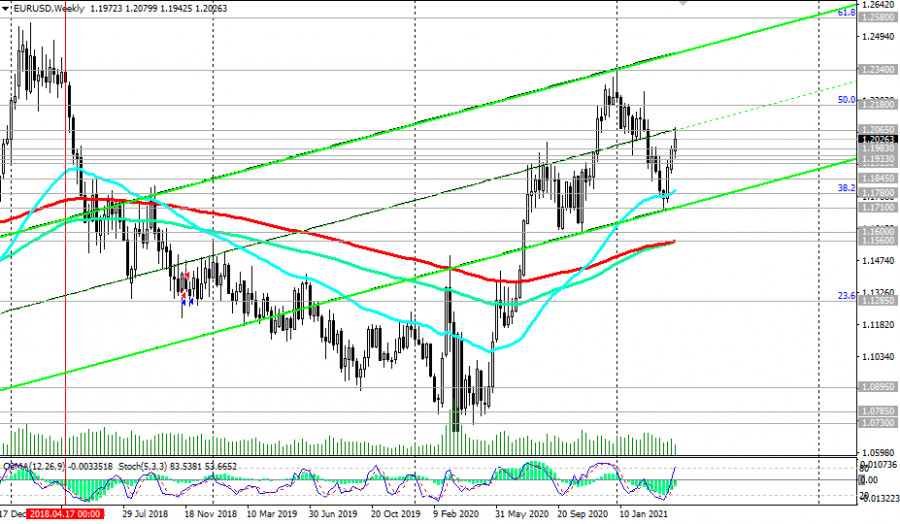