Contrary to expectations, the manufacturing ISM fell 4.7p to 60.7p, which is quite a surprise as the Fed’s regional reports all showed an increase in activity. Notably, the decline in the ISM index was not due to a decrease in demand, but, on the contrary, when purchasing managers reported that their companies and suppliers “continue to struggle to meet the growing pace of demand due to the impact of the coronavirus, limiting the availability of parts and materials.”

Backorders hit their highest level in more than forty years, with the price index at more than a decade high, in line with rising inflationary pressures. 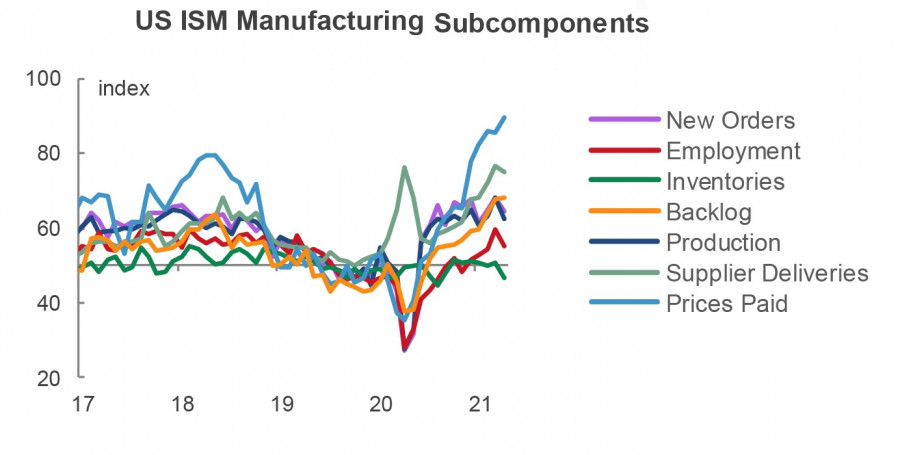 As both US and European stocks continue to rally, the weak ISM data provoked a subtle reaction. Fed chief Powell said on Monday that while the US economic recovery is making “clear progress,” growth remains uneven, and New York Fed chief Williams added that current conditions are not enough to change monetary policy.

Government bonds reacted the most, the ISM publication provoked a rally, the yield on 10-year USTs fell from 1.652% to 1.576%, which in general can be considered a rather nervous reaction. Despite the fact that the yield then recovered throughout the entire session, the pressure on the dollar became higher by the end of the day.

On the negative side, the Treasury’s intention to borrow $ 463 billion in April-June should be added, which is 368 billion more than forecast in February, when it expected that it would issue $ 95 billion in liabilities per quarter. It did not work out, for traders this is another alarming sign, as it indicates problems with collecting taxes against the background of high social benefits due to covid.

In general, we proceed from the fact that the dollar does not receive any support, the mood is bearish, and before the publication of non-farms on Friday, the chances of its growth resumption remain low.

There is a lot of data on New Zealand this week, with a focus on Q1 labor market statistics as markets draw long-term conclusions about the pace of economic recovery.

Also read  Dollar bulls seem to have high hopes for Jerome Powell, but the reasons for buying USD after April

The net long position in the NZD is up 193m to 503m, the margin is still small, but there is a tendency for the target price to reverse northward. 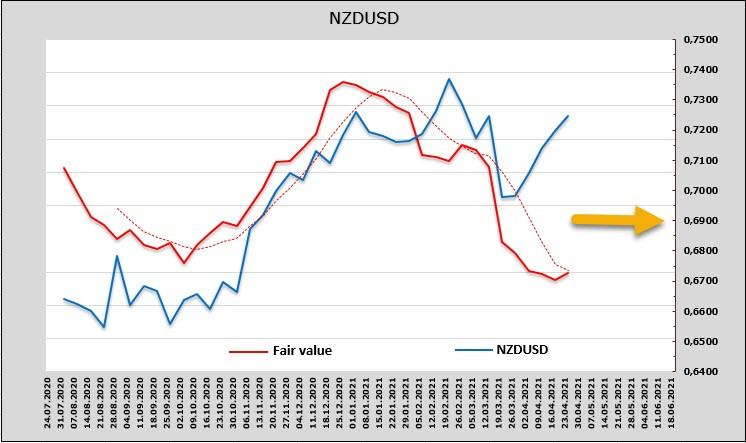 If the reversal takes place, the kiwi has a good chance of moving above the 0.7463 high. However, in the long term, the weakness of the dollar does not have deep fundamental reasons, so if non-farms on Friday turn out to be better than forecasted, the chances of a rise in the dollar and a decline in the kiwi will be significantly higher. The nearest support is 0.7100 / 15, then 0.7065 / 70. The target price is well below the spot price, which is an additional bearish factor.

At the meeting that ended this morning, the RBA kept its monetary policy unchanged. Although the Australian economic recovery was stronger than expected and is forecast to continue, inflationary pressures remain low in most sectors of the Australian economy. The bond yields also remain stable after rising at the beginning of the year, so the decision on the possible continuation of the 100 billion bond buyback program (which will end in September) has been postponed to July.

The RBA’s decision gave exactly the result that was predicted.

In the futures market, the AUD position is neutral, the weekly change of +30 million to the short position, which is only -109 million, there is a weak positive trend. 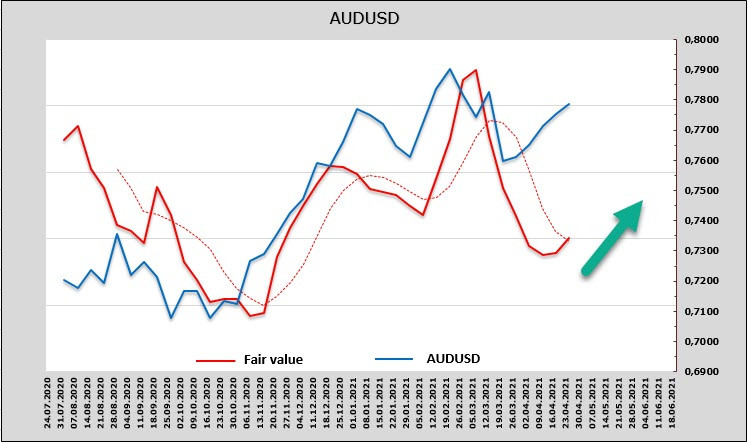 Can you count on the resumption of growth? If the target price goes higher, it will mean a growing demand for the AUD, but so far there is no such confidence. A strong resistance zone 0.7820 / 50 has formed, technically the chart is similar to a head-and-shoulders pattern, but the direction of the flows suggests that an attempt to move higher will be made. Support 0.7660 / 80, while the AUD is higher, the likelihood of continued growth will also be higher.