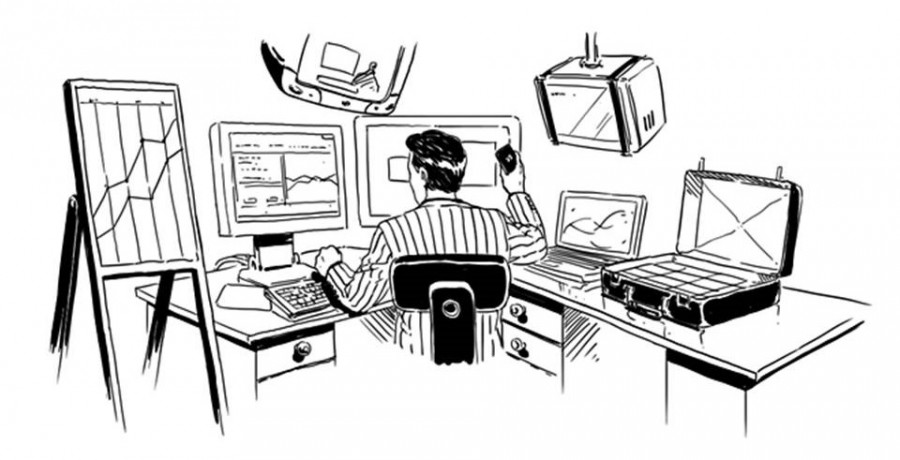 Since the beginning of April, the US dollar has been under strong pressure from sellers, where frightened traders unanimously declare a change in trading interest and a resumption of the previous trend.

What is the cause of investor concern?

Evaluating the labor market, as well as the vaccination program for the population of the United States, there are quite positive signals that the pace of the country’s recovery from the coronavirus crisis has been set.

Sooner or later, all the successes and disproportionate debts will have to be paid, it is at this stage that President Joe Biden has a plan that will raise taxes on income, investments and property of the richest Americans to a level not seen in more than four decades.

Americans earning more than $ 400,000 will face higher income tax rates, and those with incomes of more than $ 1 million will be taxed up to 43.4% on capital gains. The last time the stakes came close was when Jimmy Carter was president.

The answer to the question above is maturing on its own, investors are worried about such a radical step by the new administration that it scares them and leads to capital outflows and, as a result, the sale of dollar positions.

This phenomenon is likely to be of a short-term nature, since investors will not be able to run away with the existing dollar policy.

Also read  Bank of America: Capital inflows to the global stock market in the last 5 months turned out to be higher than in the last 12 years

What Happens on Trading Charts?

Let’s start with the dollar index (DXY) chart, where we can clearly see the recovery of downward interest relative to the 89.20 -> 93.43 upward cycle. Since the beginning of April, the index has weakened by about 2.8%, more than a 61% recovery from the upward cycle.

In simple terms, the sellers’ leverage is so great that a full recovery from the upward cycle cannot be ruled out.

As for the key levels, we already have a breakdown of the 91.00 coordinate, which enhances the sellers’ influence on the market.

To change the depressing situation, you need some kind of strong informational noise or a change from a downward cycle to a side one. 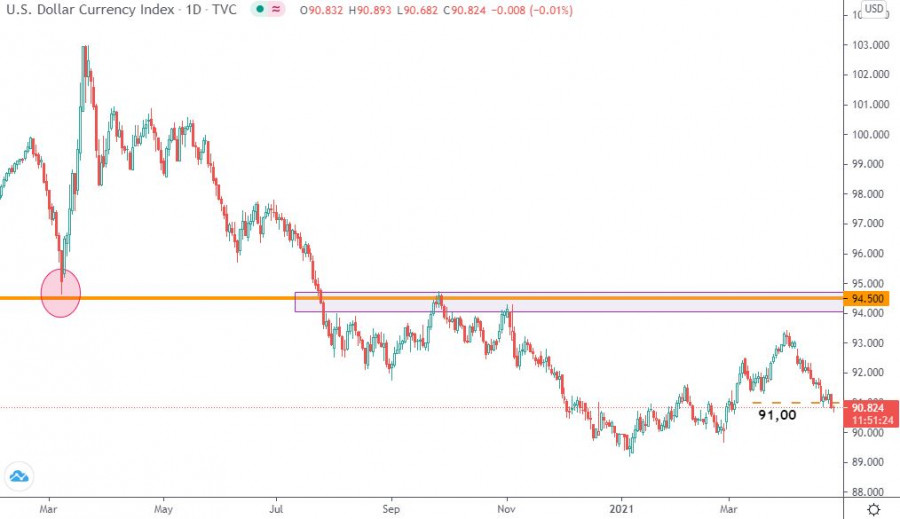 With regard to traditional currency pairs, there is a complete panic here.

Since April 1, the Euro / Dollar currency pair has an upward spiral of more than 400 points, this is a very strong price change. Due to it, the quotation managed not only to touch the control levels, it managed to overcome them, which frightened traders working to depreciate the euro.

After the coordinates of 1.2080 were broken last Friday, the alignment of trading forces changed even more towards buyers, in fact, the risk of a resumption of the medium-term upward trend has acquired a new level, relative to which traders working on the rise can interact.

Thus, keeping the price above this mark (1.2080) will have a positive effect on the volume of long positions.

As for the alternative scenario of the market development, here all the hope is for the local overcooking of the euro and the return of the price to the boundaries of the upper part of the psychological level of 1.2000 / 1.2050.

This step will not lead to the resumption of the downward move, but sellers will have a small, but still a chance. 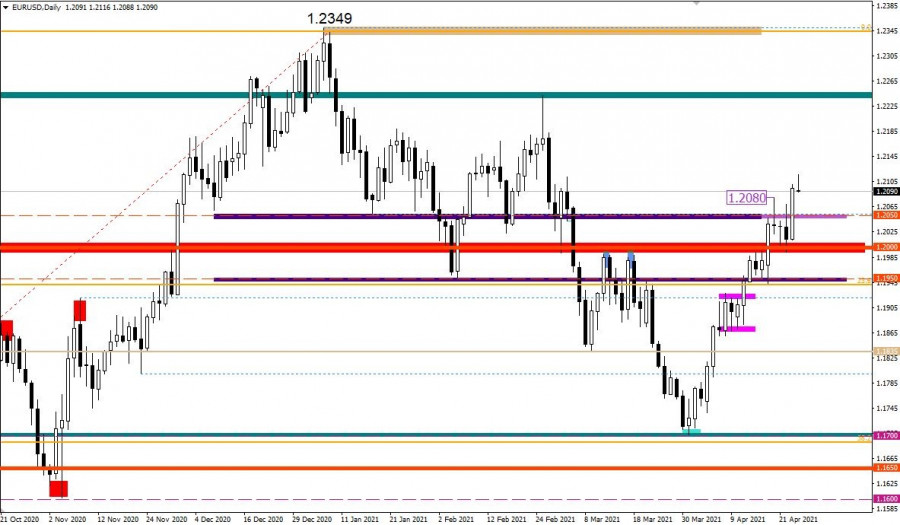 What is happening on the EURUSD chart in terms of indicator analysis and market dynamics?

Analyzing different time sectors, we see that technical instruments on the hourly and daily timeframes signal buying due to the intensive upward movement during the April period. Minute intervals have a sell signal, but this is only a variable factor. 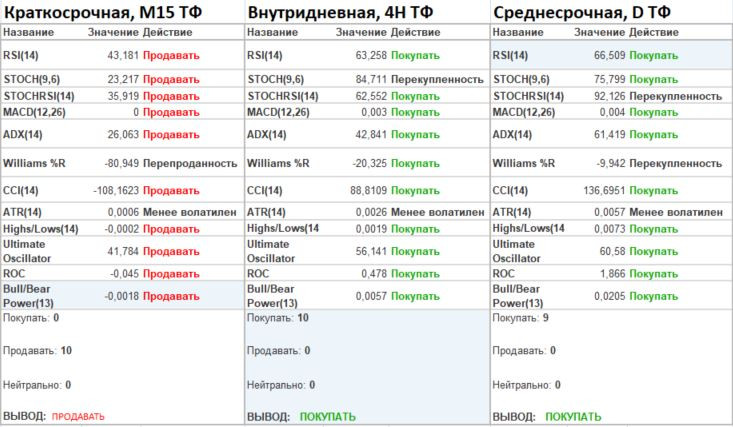 In terms of market dynamics, it can be seen that during the period of increasing the volume of long positions, volatility was at a high level, which indicates the speculative behavior of market participants. 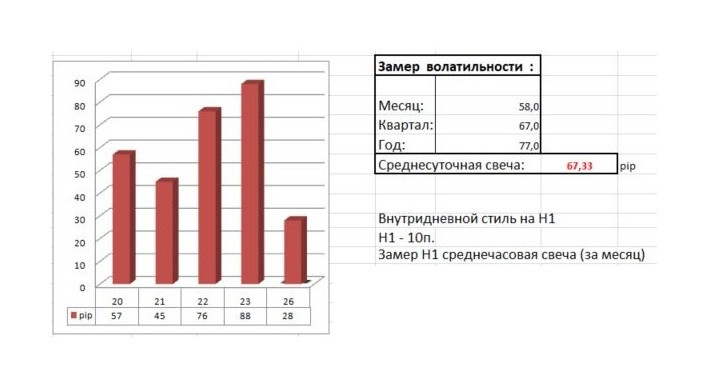 The Pound / Dollar currency pair, like its counterpart on the Euro / Dollar market, is showing signs of recovery in the upward interest market. In this case, we have a significant difference, speculators working against the US dollar did not manage to overcome the psychological level 1.3950 / 1.4000 / 1.4050 on their way.

In simple words, the recovery of the pound sterling relative to the downward movement of 1.4224 -> 1.3668 is considered an indisputable fact, but the balance of trading forces is still on the side of the sellers.

In this situation, one should not make premature conclusions, the existing upward cycle from pivot points 1.3750 and 1.3823 still has not overcome the sellers. The 1.3950 / 1.4000 / 1.4050 psychological area continues to affect the volume of long positions in terms of contraction, so traders are still considering the possibility of a downtrend.

Everything will change dramatically if the price is kept higher than 1.4050, since this step will most likely lead to the renewal of the local maximum of the medium-term trend. 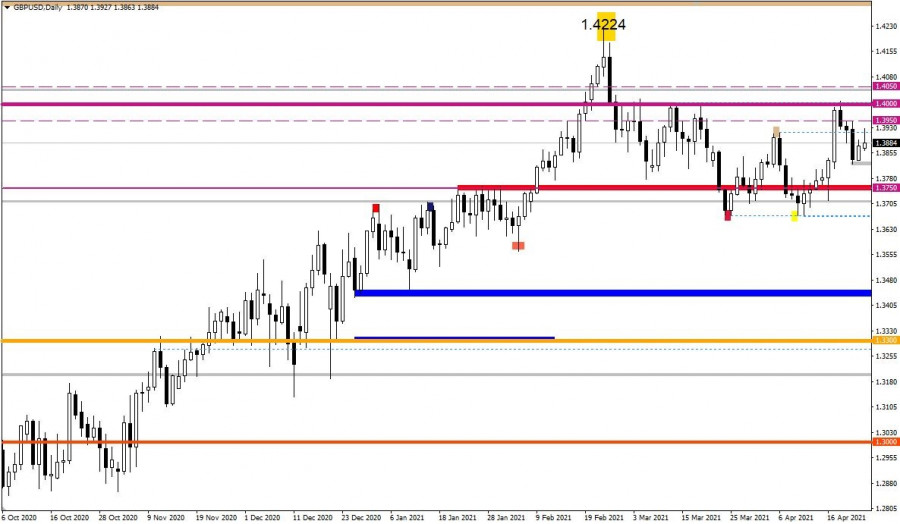 What is happening on the GBPUSD chart in terms of indicator analysis and market dynamics?

Analyzing a different time sector, we see that technical instruments on the hourly and daily timeframes signal a buy, just due to the upward cycle from the coordinates 1.3750 and 1.3823. The minute interval has a variable Buy / Sell signal. 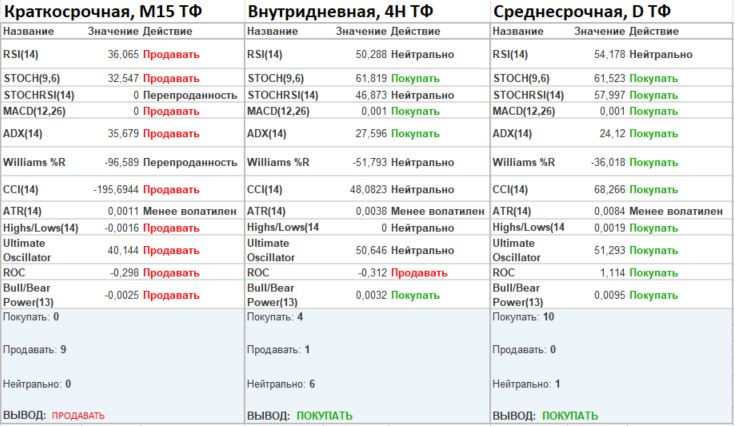 In terms of market dynamics, it can be seen that volatility has begun to decline, but at the same time, impulse price changes are still observed in the market, which indicates a speculative mood among traders. 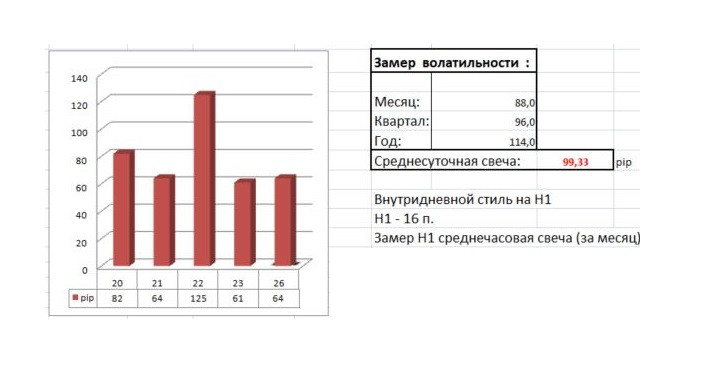