The rally in the US stock markets last week was supported by a good start to the reporting season for banks and other financial companies, as well as macro data, confirming the rapid growth of the economy.

According to data published last Thursday, the volume of retail sales in the United States increased by 9.8% in March (against the forecast of + 5.9% and a decrease of -2.7% in February). The data of the Ministry of Labor on the number of applications for unemployment benefits were also positive. In the reporting last week, the number of initial applications decreased from 769 thousand to 576 thousand, which turned out to be much better than the forecast of 700 thousand. The index of business activity in the manufacturing sector of the Federal Reserve Bank of Philadelphia also came out with a value of 50.2 that exceeded the forecast (42.0). The data above the value of 50.0 indicates the acceleration of activity, which is generally positive for the national currency.

Also read  Severstal, NLMK and MMK strengthen their positions in the ranking of the most profitable metallurgical companies in the world

On Monday, futures for major US stock indexes are rising again. Probably, the American trading session will also start with the growth of stock indices.

Meanwhile, the dollar resumed its decline. As of this writing, DXY dollar futures are trading near 91.15, 230 pips below the local 4-month highs reached in late March.

The dollar remains vulnerable amid the Fed’s stimulating policy (since the end of June 2020, the Fed has been buying at least $ 120 billion in Treasury and mortgage bonds every month to contain the rise in borrowing costs, and keeps the interest rate near zero), which spins inflation. During the March meeting, Fed officials said they still intend to keep interest rates near zero until the end of 2023, and did not express readiness to wind down the bond purchase program. Meanwhile, despite the high rates of vaccinations, the situation with the incidence of coronavirus in the United States remains tense, and the trillion-dollar stimulus programs from the US government create the prerequisites for the further weakening of the dollar.

The yield on US government bonds also continues to decline, which also knocks out the support from under the dollar.

This week, market participants will follow the course of meetings of the central banks of Canada and the Eurozone. The ECB’s decision on the interest rate will be published on Thursday at 11:45 (GMT).

And for today the publication of important macro statics is not planned.

Nevertheless, major US stock indices, including the DJIA, are likely to remain inclined to further growth, and the dollar – to decline.

However, one should not ignore the fact that the American stock market can be significantly overheated.

Investors continue to buy stocks that should benefit from rising inflation and economic activity. At the same time, the overly optimistic mood of investors may indicate their erroneous assessment that does not take into account market risks, for example, such as growth in government bond yields, a worsening epidemiological situation, a shortage of labor and a possible escalation of the geopolitical situation in the world.

As we noted above, the Dow Jones Industrial Average gained + 1.2% over the entire last week. Last Friday, DJIA futures rose to a new all-time high of 34251.0, maintaining positive momentum. At the beginning of today’s European session, DJIA futures are trading in a range near 34100.0, staying in the zone above the key support level of 30150.0 (ЕМА200 on the daily chart), also remaining within the upward channels on the daily and weekly charts. 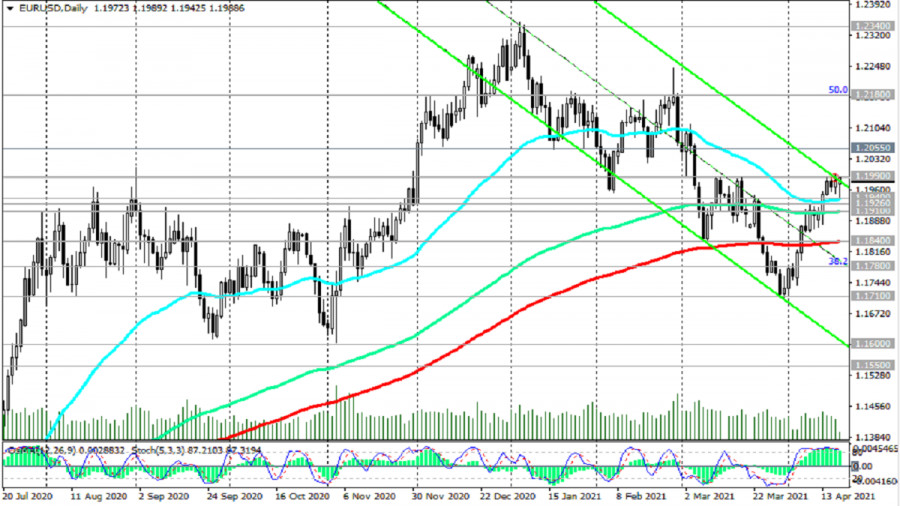 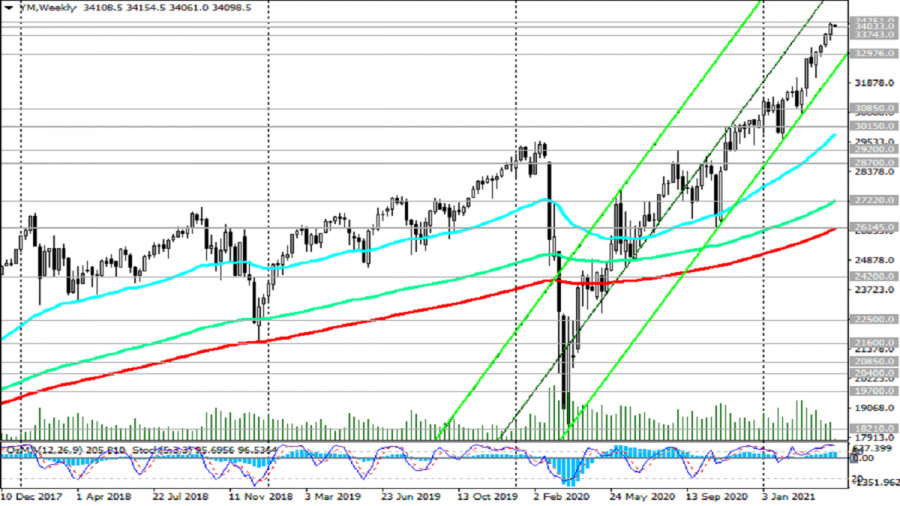 The rapid growth of optimism, fueled by the efforts of the Fed and other major world central banks, which cut rates to near-zero levels, resulted in the growth of American and world stock indices.

From a fundamental and technical point of view, it is logical to assume further growth of the DJIA. 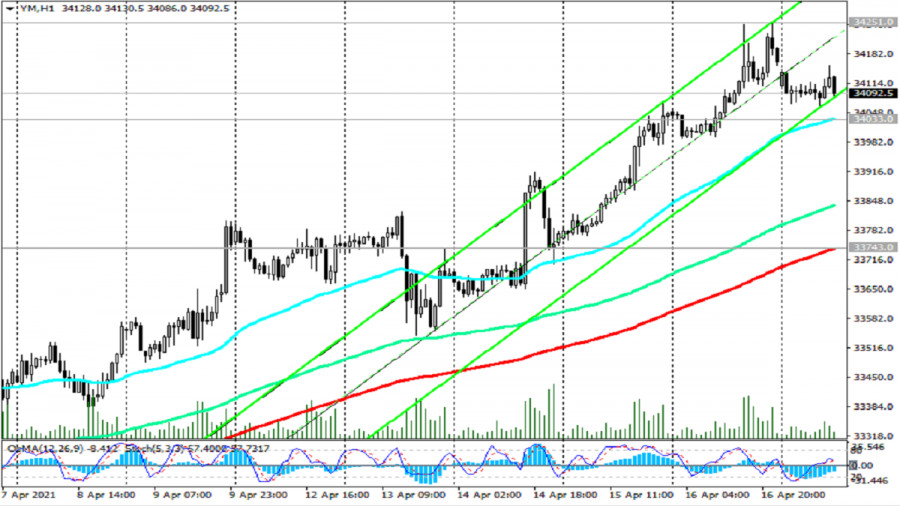 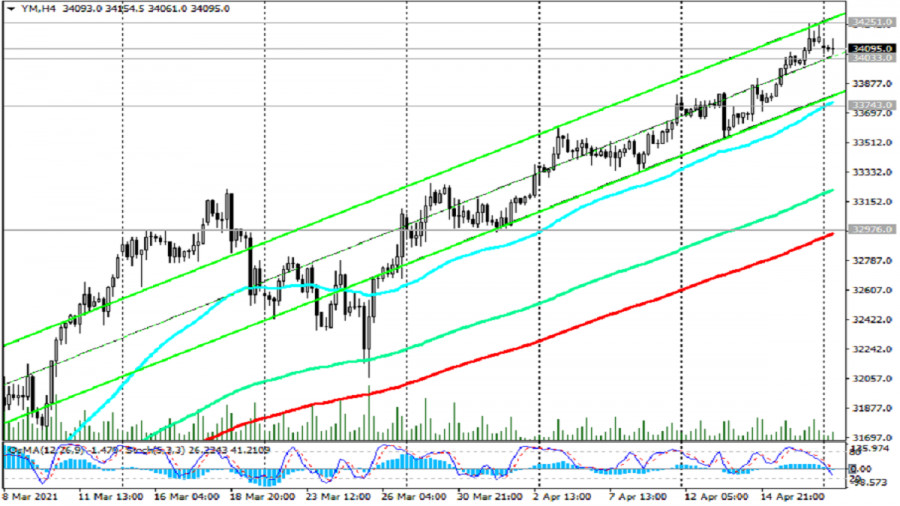 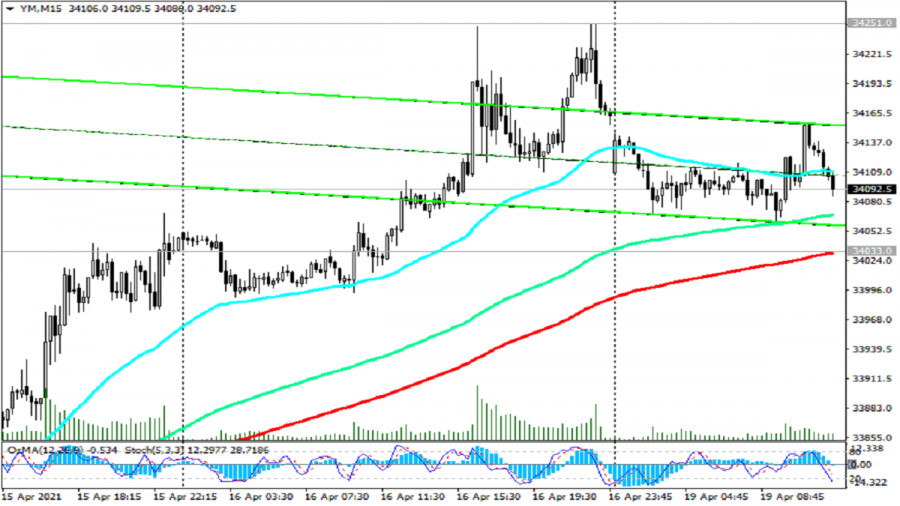 The fundamental driver for the decline may be the return of pessimistic sentiments associated with an increase in the number of cases of coronavirus and a new round of economic slowdown.

In the meantime, the market seems to be aimed at further growth.