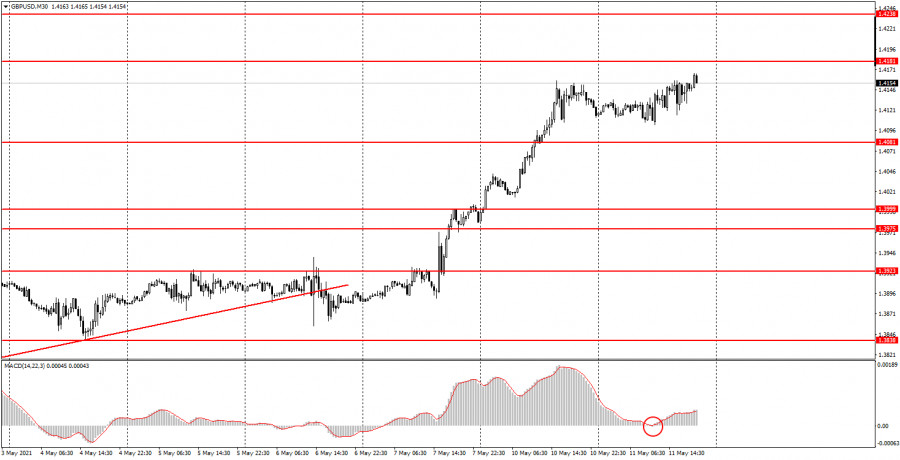 The GBP / USD pair on the 30-minute timeframe on Tuesday continued to trade higher, but this time the upward movement was very weak. Nevertheless, it was. Novice traders can see in the illustration above that there was practically no correction after the strong movement on Thursday and Friday, which suggests that buyers are not retreating from the market and continue to hold long positions. At the moment, there is an undoubted upward trend for the pound / dollar pair, but there is neither a trend line nor an upward channel that would provide guidance for movement and corrections. Nevertheless, it was recommended for novice traders to consider buy signals from the MACD indicator and it was formed during today. Unfortunately, due to the minimal volatility, it was not possible to make money on this signal. To be more precise, the pair went up after its formation by only 24 points, which was enough to place a Stop Loss order on a trade at breakeven. Thus, novice traders could no longer receive a loss on a long position. There hasn’t been a single important publication during the day. A speech by the head of the Bank of England Andrew Bailey was planned, but this event did not give any new and important information to the markets. 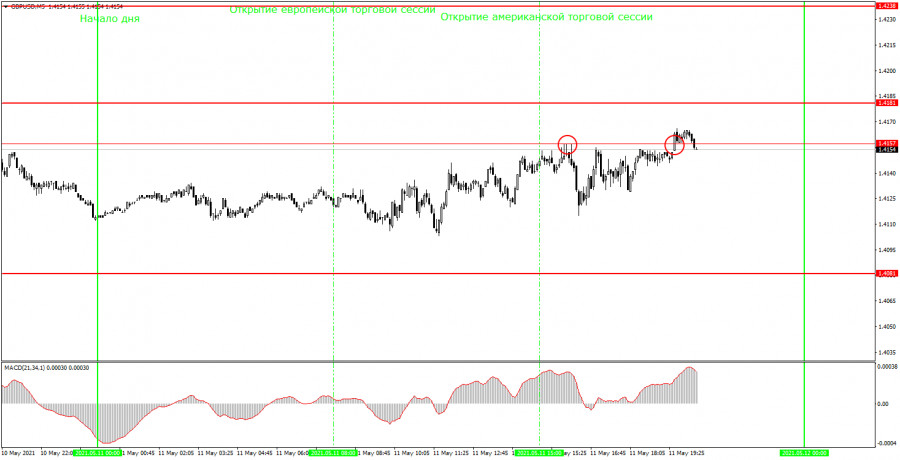 On the 5-minute timeframe, the picture is even more “talking”. First, the nature of the movement of the pair today is clearly visible here. Almost flat with minimal volatility. Therefore, today it was a priori very difficult to make money with this pair. Secondly, more signals were formed here, exactly one. In principle, they are immediately visible even without our circles in the illustration. This is a rebound and breaking through the level of 1.4157. Moreover, if the first signal could still be worked out by a short position, then the second one clearly did not follow, since by the time of its formation it had already become clear that the pair was in a flat, and the matter was moving smoothly towards the night, that is, the volatility and activity of the pair may decrease even more. On the first signal, sell orders should have been opened, but the price went down after it was formed by only 29 points, which again was enough to set Stop Loss at breakeven, but not to make a profit: the nearest target level of 1.4081 was not reached, 40 points required for Take Profit are not passed.

How to trade on Wednesday:

At this time, there is an undoubted upward trend on the 30-minute timeframe. However, the movement is still too strong and can be replaced by an equally strong fall at any time. There is no trend line at this time, and the movement is practically recoilless, so the MACD indicator does not always have time to discharge to the zero level in order to form a new strong buy signal. Thus, tomorrow novice traders in any case need to wait for a new round of correction and discharge of the indicator to the zero level. On the 5 minute timeframe, the important levels are 1.4081, 1.4157, 1.4181 and 1.4238. The price can bounce off them or overcome them. As before, we set Take Profit at a distance of 40-50 points. You can also use all the nearest levels as targets, but then you need to fix the profit, taking into account the strength of the movement, so as not to close the deal too early. When passing 20 points in the right direction, we recommend setting Stop Loss to breakeven. On Wednesday, the UK is to publish important data on GDP for March and for the first quarter, as well as a report on industrial production and a speech by the Governor of the Bank of England Andrew Bailey. And in the US – the most important report on inflation will be released. Thus, potentially tomorrow there will be very volatile trades, we recommend trading very carefully, especially during this or that event.