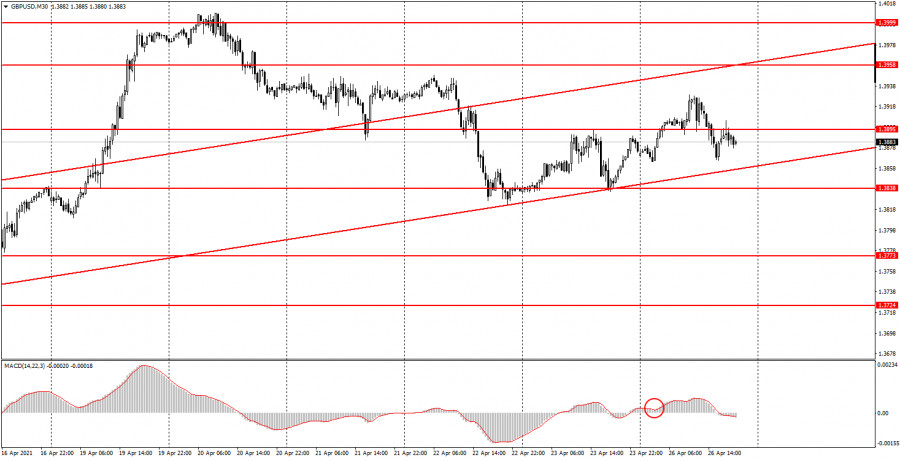 The GBP / USD pair on the 30-minute timeframe moved rather chaotic on Monday. The upward trend continues, which is signaled by the upward channel. However, in the last two trading days (including today), the pair somehow changes its direction of movement too often, which greatly complicates the trading process. During today, the MACD indicator generated only one buy signal, but it was formed at night, so it did not work out, although after its formation the pair went up about 50 points. And here’s another distinctive feature – at the Asian session at night today there were quite active trades, which usually does not happen. In general, today, in general, was not the most successful and auspicious day. On the 30-minute timeframe, we managed to avoid losses, since no signals were generated. But the situation is a little worse on the 5-minute timeframe. 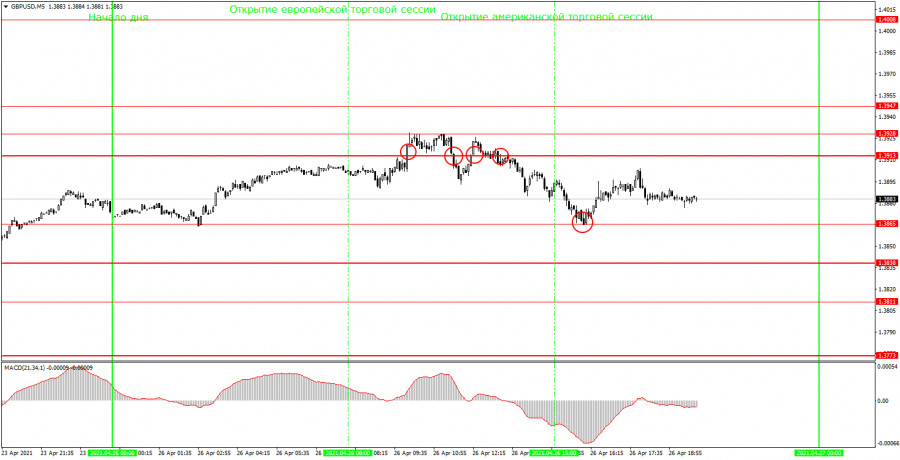 On the 5-minute timeframe, five signals were formed during the day, most of which are false. Let’s start with the fact that around the level of 1.3913, 4 signals were formed at once. In order not to analyze each one separately, let’s say that novice traders could work out the first two signals, buy and sell. Unfortunately, they turned out to be false, which led to losses of 14 and 16 points. It was no longer necessary to work with this level further, since two false signals eloquently show that the markets do not perceive this level as important. The last fifth signal formed around the 1.3865 level. The rebound from it was clear, worth working out, but about half an hour before its formation in America, a report on durable goods orders was published. This indicator turned out to be not in favor of the US dollar, as its value turned out to be lower than forecasted. Moreover, it is much lower. Accordingly, after its publication, one could expect a fall in the American currency. This fall happened, but upon closer examination it becomes clear that it began 35 minutes after the signal itself. Thus, it is impossible to say unequivocally that the markets reacted to the report, and the signal itself did not work out either. However, with a high degree of probability, it would not have been possible to earn money on this signal, since the pair did not go up 40 points and did not manage to reach the nearest level of 1.3913.

Also read  Bitcoin is one step away from a collapse in the 45,000 region. Players take profits amid talks about possible regulation

On Tuesday, we recommend trading again according to the upward trend on the 30-minute timeframe. The pair continues to be inside the upward channel. Thus, tomorrow it will be necessary to wait for the formation of new buy signals in the form of upward reversals of the MACD indicator or bounces from the lower border of the channel. The indicator is now close to the zero level and can generate potentially strong signals. In America, only the consumer confidence indicator is scheduled for April 27, and in Britain the news calendar is empty. Thus, the macroeconomic background will have practically no effect on the movement of the pair tomorrow. On the 5 minute timeframe, the important levels are 1.3838, 1.3865, 1.3913, 1.3928 and 1.3947. The price can bounce off them or overcome them. As before, we set Take Profit at a distance of 40-50 points on a 30-minute timeframe, on a 5-minute timeframe, the target is the nearest level (if it is located more than 20 points). If the nearest level is too far away, then it is recommended to maintain the deal in manual mode, tracking changes in the market. When passing 20 points in the right direction, we recommend setting Stop Loss to breakeven.