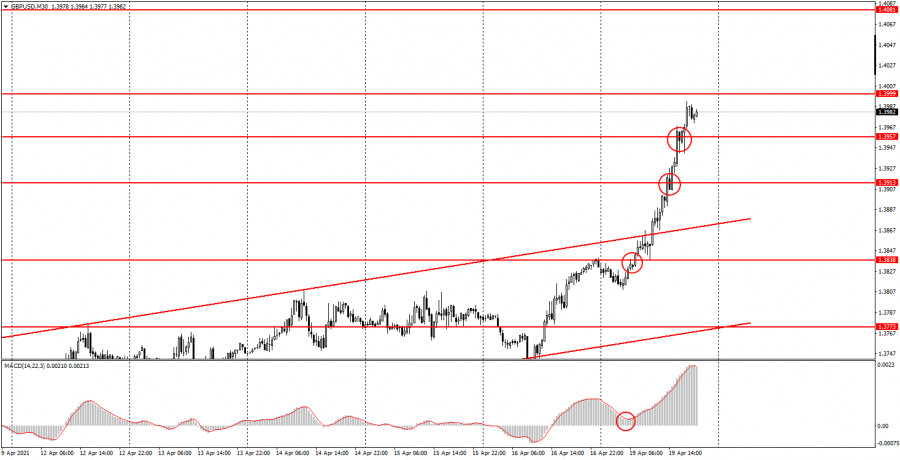 The GBP / USD pair on the 30-minute timeframe was trading very actively again on Monday. Thus, for the second trading day in a row, novice traders themselves could conduct very active trading, since there were plenty of signals. The upward trend in the pound / dollar pair continued, therefore, buy signals should be considered from the MACD indicator. In principle, for a whole day, only one of these was formed, early in the morning and not too far from the zero level. Here the situation was delicate, since the signal had formed before the opening of the European trading session, that is, in theory, it should have been discarded. However, a little later the price consolidated above the level of 1.3838, which was also a buy signal. However, this signal also formed before the opening of Europe. But with the opening of the European session, the quotes of the pair did not even have time to go far from the levels where two buy signals were formed at once. Thus, a buy deal still had to be opened. And she could bring from 40 to 140 points of profit. 40 points is the absolute minimum if novice traders set Take Profit. 60 points – if profit was fixed near the first target level of 1.3913. If the beginners kept the deal open further, they could make a profit of 100 pips or more. By the way, so that there are no doubts about a buy signal: the price also managed to bounce off the level of 1.3838, which is also a buy signal and was formed during the European session. Thus, today there was a whole triple buy signal.

Also read  Review of the GBP / USD pair. April 27. It is very difficult to find a black cat in a dark room. 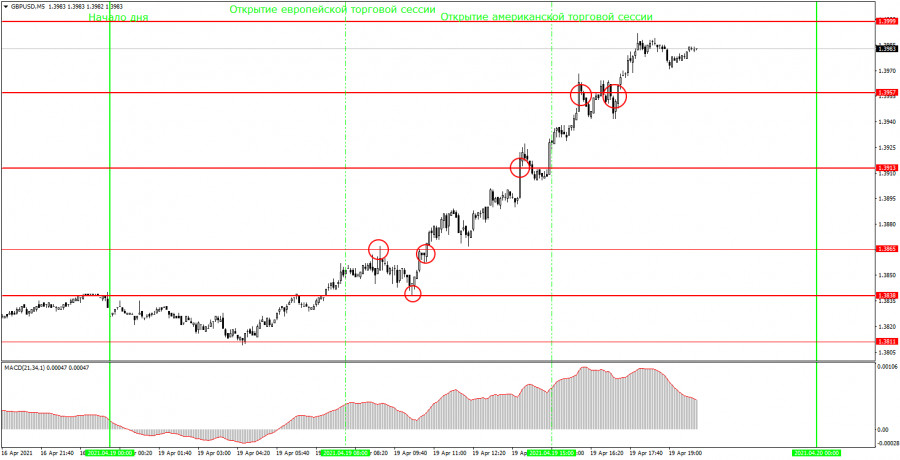 There were many more signals formed on the 5 minute timeframe during the day, but in general they would also be profitable. Let’s start with the fact that the only signal that should have been worked out, and even then with a very big stretch, on the 5-minute timeframe, this is the very first one – a rebound from the level of 1.3865. Here it was possible to open short positions with the target of the level of 1.3838, which was successfully worked out, bringing in a profit of about 14 points. There was also a rebound from the level of 1.3838, which we talked about in the section on the 30-minute timeframe, so here in any case it was necessary to open buy positions and during the day new buy signals were only formed when the pair broke the next level on its paths. During the day, there was not a single important macroeconomic report or other event.

Also read  There is no smoke without fire

On Tuesday, we recommend trading again in accordance with the existing uptrend on the 30-minute timeframe, although the price went much higher than the ascending channel. Thus, tomorrow it will be necessary to wait for the formation of new buy signals in the form of upward reversals of the MACD indicator. The MACD indicator first needs to be discharged to the zero level, as it is now very high. There are no important and interesting events planned for April 20 in America, and in Britain there will be several secondary reports that are unlikely to provoke a market reaction. On the 5 minute timeframe, the important levels are 1.3913, 1.3957, 1.3999 and 1.4081. The price can bounce off them or overcome them. As before, we set Take Profit at a distance of 40-50 points on a 30-minute timeframe, on a 5-minute timeframe, the target is the nearest level. If the nearest level is too far away, then it is recommended to maintain the deal in manual mode, tracking changes in the market. When passing 20 points in the right direction, we recommend setting Stop Loss to breakeven.

Also read  Forecast and trading signals for GBP / USD for April 28. Detailed analysis of yesterday's recommendations and the movement of the pair during the day.