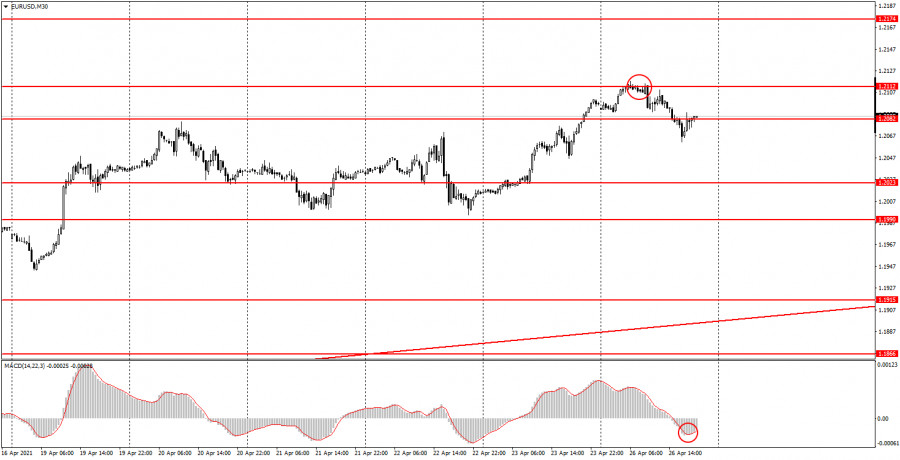 The EUR / USD currency pair bounced off the level of 1.2112 on Monday, and twice (which will be seen on the lower timeframe) and very accurately, therefore, a rather strong sell signal was formed, which should have been worked out. In general, the upward trend in the EUR / USD pair remains, as evidenced by the rising trend line. The upward movement has been going on for more than three weeks. This way, novice traders can see an example of a really strong trend (for the short term). Unfortunately, the MACD indicator at this time practically does not generate signals that could be worked out. Recall that only buy signals should be considered. Today, for example, such a signal was generated, but at the same time the indicator was too low, much below the zero level, therefore, this signal should not have opened long positions. The point of working with this indicator is to follow the trend after each correction. However, if the indicator goes too low, there is a high probability that the correction has been delayed or that the indicator will simply stop correlating with the price and begin to discharge. We recommend that novice traders pay attention only to the clearest signals.

Also read  EUR/JPY: Remains bearish underneath the SMA of 200 days 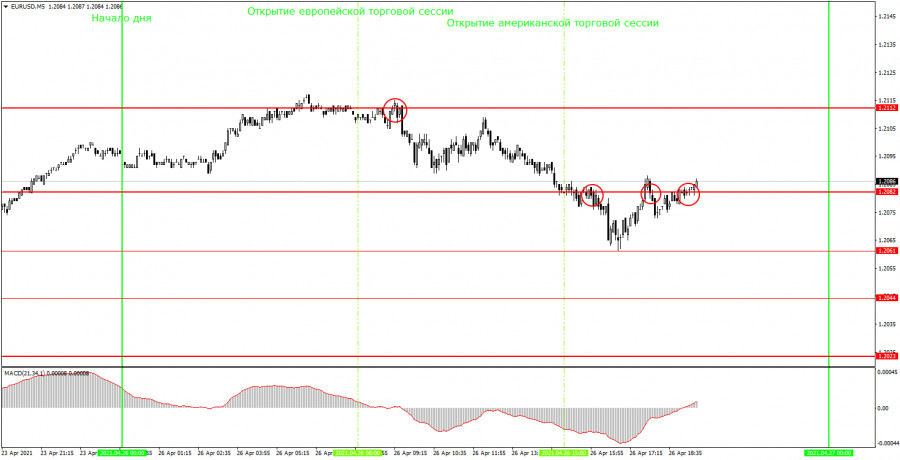 Now let’s take a look at the 5 minute timeframe. During the day, 4 signals were generated here, the first of which exactly repeats the signal from the 30-minute timeframe. But on the 5-minute timeframe, it naturally formed earlier. Thus, novice traders could open short positions here. Since the closest level of 1.2082 was worked out by the price, and only the EUR / USD pair went down by about 41 points, novice traders could close this deal both manually and by Take Profit. In any case, they would have made a profit of 30 points. The second signal to sell should not have been worked out, since at the very beginning of the American trading session, when it was formed, a report on orders for durable goods was published in the USA. Not the most important and significant report, however, after it the pair began to be thrown from side to side, which is clearly visible just on the 5-minute timeframe. Literally in the last two hours, two more signals about overcoming the level of 1.2082 were formed, however, we would also not recommend working them off, since the trading day is ending, and just recently a report was published, after which there was both an increase in the fall and a sharp upward reversal.

Also read  News calm, accompanied by a new strengthening of the GBP

On Tuesday, we recommend trading on the 30-minute timeframe, still buying, as the upward trend continues. The upward trend line remains relevant. The MACD indicator was sufficiently discharged on Monday, but now it is too low to generate buy signals. Novice traders can trade tomorrow from levels 1.2082, 1.2112 and 1.2174 for a bounce or break in both directions. Take Profit, as before, is set at a distance of 30-40 points. Stop Loss – to breakeven when the price passes in the right direction by 15-20 points. There are more levels on a 5-minute timeframe, each of them can also be used to receive signals. We remind you that you should only use the most accurate and clear signals. No important publications are scheduled for April 27 in the European Union, and only an indicator of consumer confidence will be released in the United States. From our point of view, it is unlikely that there will be a reaction to it, and it will be released in the late afternoon. However, it should be remembered that there will be such a report.