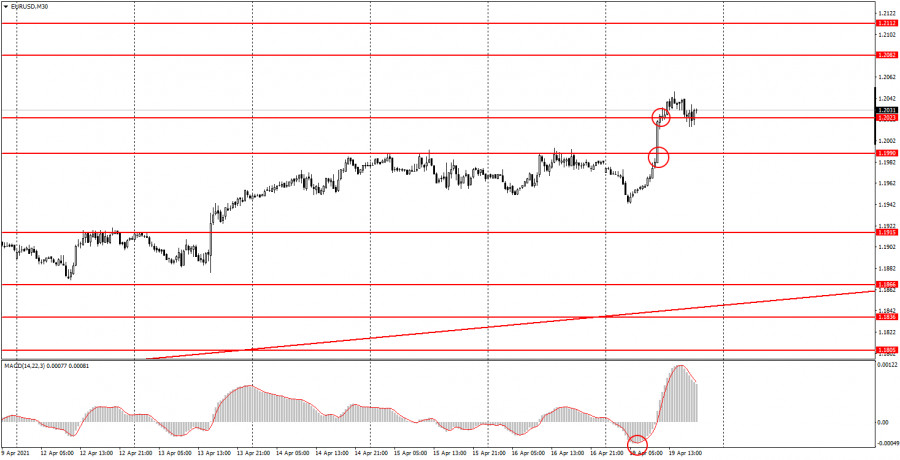 The EUR / USD currency pair on Monday after another rebound from the level of 1.1990 slightly corrected and resumed the intensified upward movement. The movement was much stronger than in recent days, as can be clearly seen in the illustration. In a way, such a strong upward movement was a surprise for novice traders. From the low to the high of the day, the EUR / USD pair went more than 100 points. And this despite the fact that no important statistics were published today, there were no important events. Just an ordinary boring Monday. But sometimes it happens. This is the foreign exchange market, here you cannot be sure of anything with a 100% probability. Now let’s figure out which deals you could open today. First, in the morning the MACD indicator turned upward and formed a buy signal. However, we do not recommend working out such signals when the indicator is far away from the zero level. Therefore, this signal had to be passed. In the end, he would have made a profit, but, on the other hand, in other situations, such signals could bring a loss. We continue to remind novice traders that it is best to work out as clear and accurate signals as possible, and if there are none, then it is better not to enter the market at all. Thus, the next signal was formed when the price consolidated above the level of 1.1990, however, it was no longer worth opening long positions here, since at the time of its formation the price had already gone up about 75 points. With the volatility of the last days not exceeding 40 points, the probability of a further upward hike was extremely low. The same applies to the third buy signal, which was formed when the level of 1.2023 was overcome. Thus, no trades should have been opened on Monday on the current timeframe. 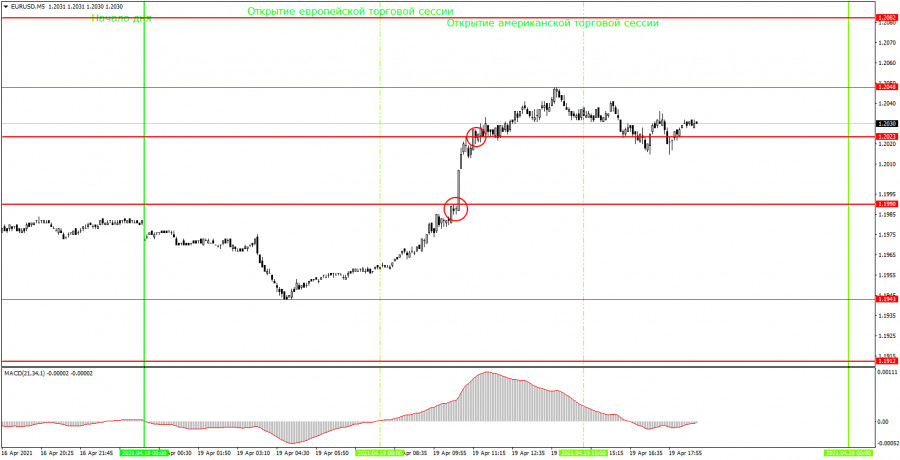 Now let’s take a look at the 5 minute timeframe. Two buy signals formed here during the day. And unlike the 30-minute timeframe, they could be worked out. The first signal was formed when the price fixed above the level of 1.1990, but novice traders could open a buy deal only at the level of 1.2007, since it was there that the candlestick at which the signal was formed was closed. Since the nearest target was only 15 points away, it was better to use Take Profit, as we always recommend, at a distance of 30-40 points. As a result, the pair went up another 40 pips, so beginners could make a profit on this deal. The 1.2048 level is today’s high. Thus, there was no rebound from it to open sell trades – it just appeared on the chart a couple of hours ago. Around the level of 1.2023, the pair either tried to gain a foothold below, or bounced, but in any case, it was already too late to open deals here, since the pair had covered a long distance during the day, plus it was approaching evening and night, so it was no longer possible to open deals follows.

On Tuesday, we recommend trading on the 30-minute timeframe, still buying, as the upward trend continues at the moment. The uptrend line continues to support bull traders. After today’s upward movement, the MACD indicator needs to be discharged to the zero level, so we are waiting for a correction, which may just happen at night. Also, novice traders can trade from the levels of 1.2023 and 1.2082 for a rebound or overcoming in both directions. Take Profit, as before, is set at a distance of 30-40 points. Stop Loss – to breakeven when the price passes in the right direction by 15-20 points. On the 5-minute timeframe, the situation cleared up, and most of the levels were removed. The nearest important levels are 1.2023, 1.1990, 1.2048 and 1.2082. They should be used in trading on Tuesday. No major publications are scheduled for April 20, either in the US or in the EU.