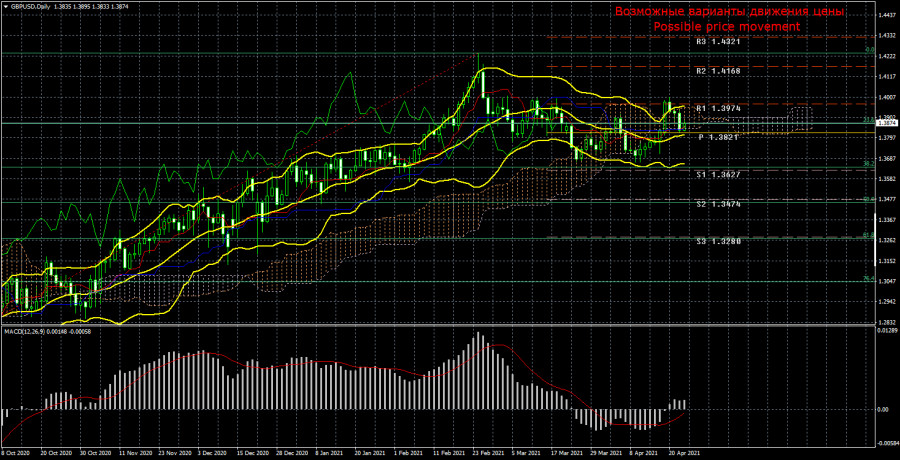 What to say about the pound on the eve of the new trading week? The pound / dollar pair continues to move like a “swing”. Despite the fact that the uptrend, which has been going on for more than a year, also persists. The current movement of the pair cannot be called non-standard or unusual, but it is clearly different from the “normal” movements of any pair. The trend seems to be there, but there are practically no clear corrections. Over the past two months, traders have managed to pull the pair as much as 560 points from 2.5-year highs, which is very small, given that the entire trend from low to high is about 2800 points. Yes, this trend began after the strong growth of the American currency, which was observed at the very beginning of the pandemic and the beginning of the global crisis in March last year, but this does not negate the fact that the trend is 2800 points. And 560 points is a 20% correction, which is certainly very small. Thus, on the one hand, if the downward movement is resumed now, then there can be no surprise in this regard, and on the other, why has the pair not corrected for a greater value yet? After all, there were many fundamental reasons, and now there are enough! However, from our point of view, the “speculative factor” continues to work with might and main and the factor of infusion of trillions of dollars into the American economy, which corny increases the supply of dollars in the foreign exchange market, naturally, reducing its rate. Thus, all factors like the “Scottish issue” or the “Northern Ireland Protocol” and the unrest caused by it, do not play a special role for market participants. Not to mention the macroeconomic statistics, which were abundant in the UK last week. However, the greater part was ignored, and the smaller part had only a minimal impact on the movement of the pound / dollar pair. It turns out a situation in which one can pay attention only to global factors, but even they do not guarantee an adequate response to them.

Nevertheless, we certainly do not recommend completely abandoning the study of macroeconomic statistics. First, it provides a clear indication of the pace of recovery in the British and American economies. Secondly, in the context of one day, there can still be a reaction. On Monday, the US will publish a rather important report on the change in the volume of orders for durable goods. This report is important because this category of goods is notable for its high cost, and accordingly reflects the economic activity of the country’s population. The figure is expected to rise 1.7% to 2.5% in March. However, all recent reports on this indicator did not provoke a reaction from the market. On Tuesday and Wednesday, no statistics will be published either in the United States or in Britain, but on Wednesday evening there will be a summing up of the results of the Fed meeting and a press conference with Jerome Powell. Recall that Powell’s rhetoric is now radically different from the rhetoric of Christine Lagarde. If the head of the ECB speaks openly about the weakness of the recovery and the continuing high risks of a pandemic, then the chairman of the FRS, on the contrary, notes the high rates of recovery. Thus, on Wednesday one can expect from Powell, if not hawkish statements, then at least positive statements, which may provide short-term support for the American currency. The already really important GDP report for the first quarter of 2021 will be published in the US on Thursday. This is not the final figure, however, experts expect an increase of 6.3% – 6.5% in quarterly terms. Thus, after a rather strong fourth quarter (+ 4.3% qoq), an even stronger first quarter may follow. Naturally, again in the short term, the US dollar may rise against both the euro and the pound. Also on Thursday, the report on applications for unemployment benefits, which is secondary in the given conditions, will be released. On Friday, there will also be only minor reports – the levels of income and spending of the American population and the index of personal consumption expenditure. As you can see, this week there will be no statistics from Foggy Albion, so all attention is on the States.

Also read  What trends are the markets focusing on? The pound is eager to fight

In general, we continue to insist that markets will continue to focus not on “macroeconomics”, but on global fundamentals. And even then, with some stretch. If we really expect further growth for the euro, then for the pound the current market sentiment can be described as “uncertain”. Thus, both the correction can resume and the uptrend. Most likely, only the “swing” movement mode will not change. Both Bollinger Bands and Ichimoku Indicators are now eloquently showing that the pair is close to flat. Thus, it is best to reject the pair, using the shortest-term timeframes, where trends at least have time to form. 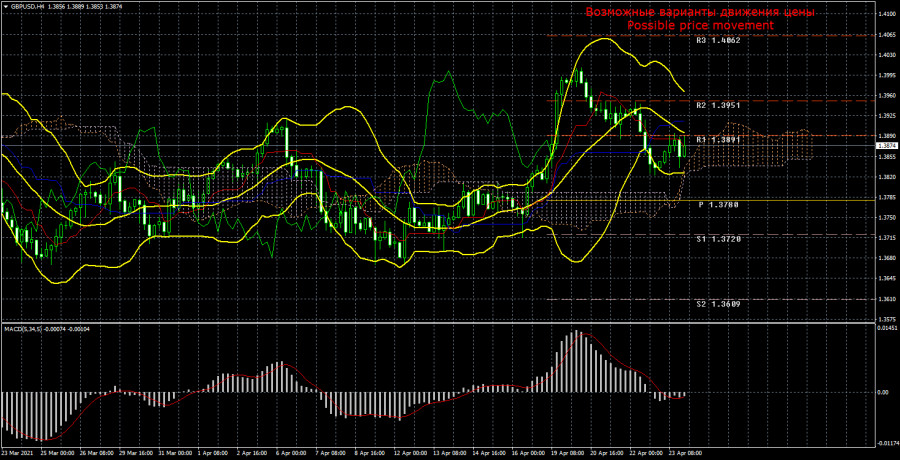 The pound / dollar pair on the 4 hour timeframe is trying to start a new downtrend. Although, of course, it is rather difficult to call a movement by 250-300 points a “trend”. At the moment, the quotes of the pair have consolidated below the critical line, so the downward movement should continue next week. However, such movements fully fit into the “swing” mode, when the pair alternates periods of growth and fall of 250-300 points. Therefore, we expect a descent to the 37th level area within the next five working days.