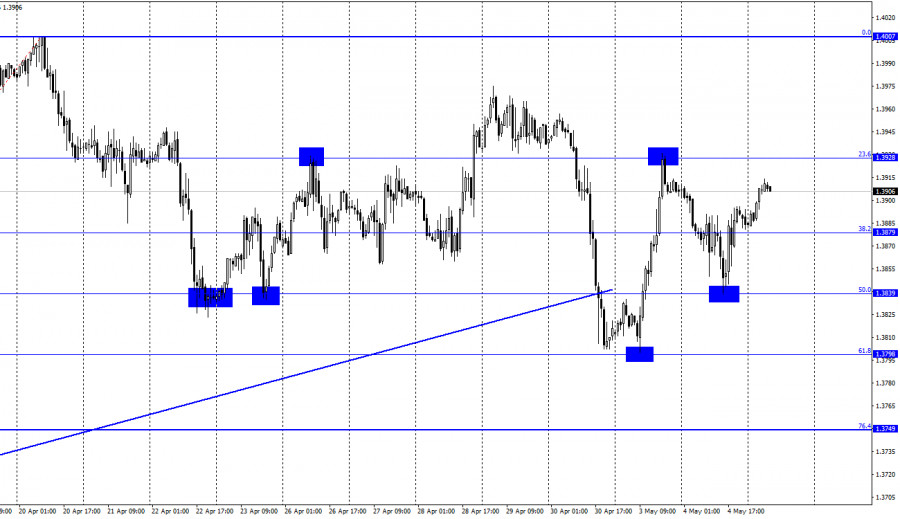 Good afternoon, dear traders! On the hourly chart, the GBP / USD pair rebounded from the correction level of 50.0% – 1.3839, reversal in favor of the British and began to grow in the direction of the correctional level 23.6% – 1.3928. A rebound of quotations from this level will work in favor of the American currency and the resumption of the fall towards the level of 50.0% – 1.3839. Meanwhile, UK economists are starting to panic over tomorrow’s parliamentary elections in Scotland. Representatives of large UK banks and not only note that risks to the economy and the pound are growing, although the markets are not in a hurry to take them seriously and hedge them. By and large, all economists surveyed note that everything will depend on the election results. If the parties that insist on an independence referendum get the required number of votes (which is likely to happen), then the risks to the British economy and the pound sterling will increase. Experts note that the current calmness of the markets may give way to panic when the results of the elections in Scotland become known. Many predict huge and dire consequences for both England and Scotland in the event of a rupture. In this case, Scotland wants to return to the European Union, but it will have to share common debts with Britain, choose which currency it will use and what relations it will have with the rest of the Kingdom. Experts also note that Scotland means much more to Great Britain than the European Union, since the first union is more than 300 years old, while the British were connected with the European Union for only 50 years. Thus, Scotland’s exit could be more devastating for Britain than Brexit. 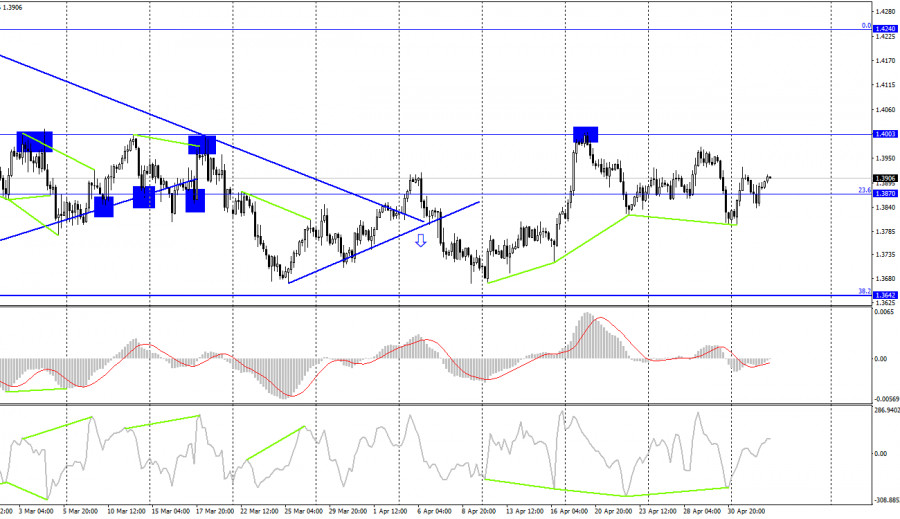 In the 4 hours chart, the GBP / USD pair also reversed in favor of the British and closed above the 23.6% – 1.3870 retracement level after the formation of a bullish divergence in the CCI indicator. Thus, the growth process can be continued towards the level of 1.4003, but in general the graphical picture does not look very accurate. The picture is most understandable on the daily chart, which I recommend paying attention to. 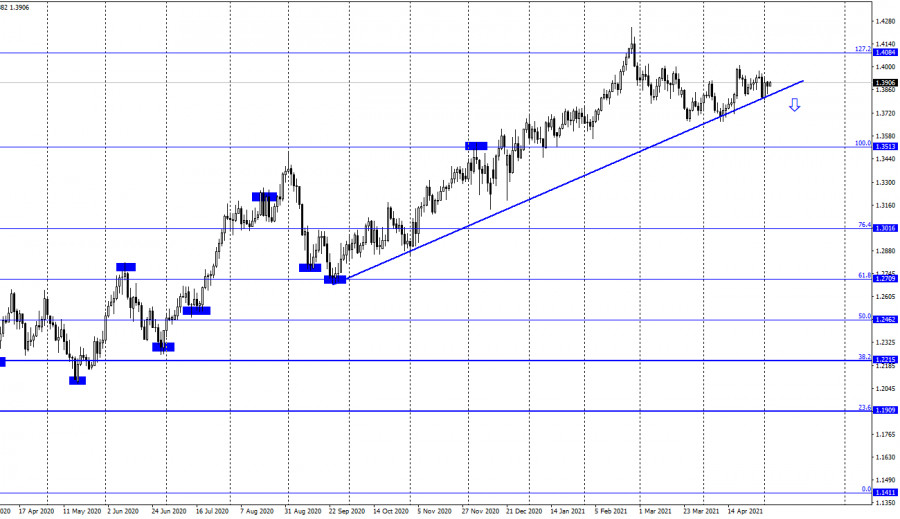 On the daily chart, the quotes of the pair completed a return to the uptrend line and at this time it is being decided what will happen: a pullback or a close below. In the first case, the uptrend will continue, in the second, the chances for the continuation of the fall in quotations will increase. The daily chart now most accurately describes the picture of what is happening.

Also read  Fears about the breakup of the UK and accusations against Johnson are limiting the growth of the GBP. And yet the pound is getting more expensive 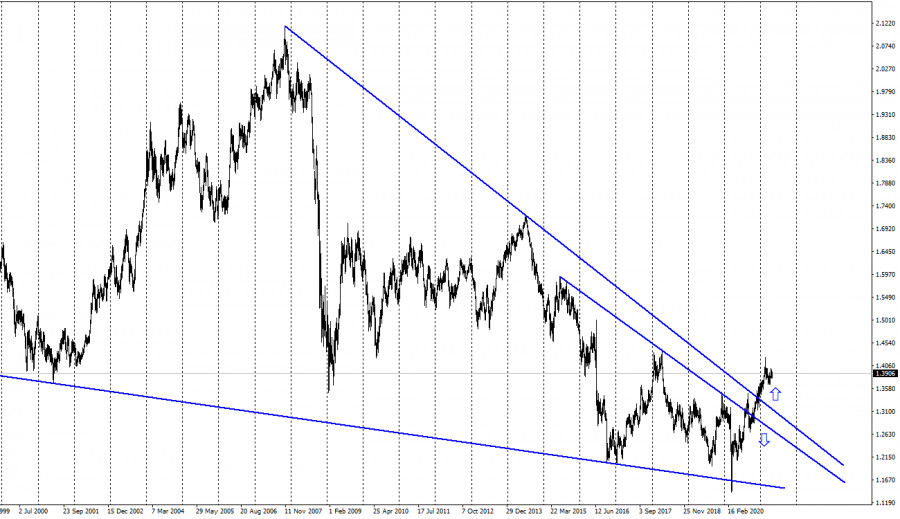 On the weekly chart, the pound-dollar pair closed above the second downtrend line. Thus, the chances of a long-term growth of the pound sterling remain.

There were no major economic reports from the UK and the US on Tuesday. However, the speech of the US Treasury Secretary Janet Yellen briefly influenced the pound-dollar pair and allowed the American currency to rise slightly.

News calendar for USA and UK:

On Wednesday, the UK calendar is again completely empty, but in the US there will still be two fairly important reports, which I recommend traders to pay attention to. 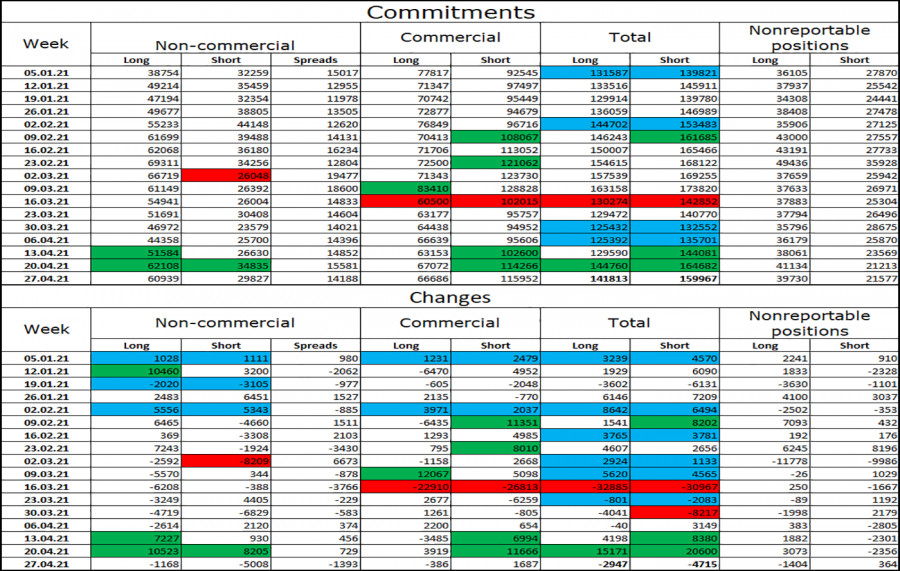 The latest COT report from April 27 UK showed that speculators’ sentiment has become a bit more bullish again. Although this time it was about closing contracts, not opening them. The number of Long contracts was reduced by 1168, and the number of Short contracts – by 5008. Thus, the gap between the total number of Long and Short contracts for the “Non-commercial” trader category has increased. This increases the likelihood of a new rise in the British quotes. However, the uptrend line on the daily chart is of key importance for its prospects now.

Forecast for GBP / USD and recommendations for traders: