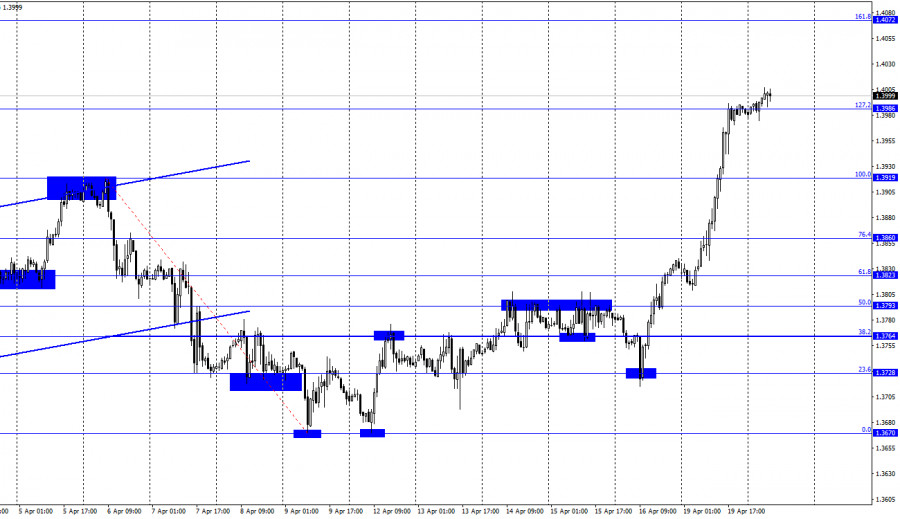 Good afternoon, dear traders! On the hourly chart, the GBP / USD pair rebounded from the correction level of 76.4% – 1.3728, a reversal in favor of the British and an increase to the Fibo level of 127.2% – 1.3986. The non-stop growth of the Briton has been going on for two days and at the moment the quotes closed above the level of 127.2%. Thus, despite the 300 points passed up, the pair may continue the process of growth in the direction of the next Fibo level of 161.8% – 1.4072. In my review on the euro-dollar, I raised the question of what happened on Monday, that the quotes of the American currency collapsed? Looking at what is happening in the pound-dollar pair, he wants to repeat the same question with twice as much expression. It is obvious that traders are not paying any attention now either to economic reports (which simply do not exist and did not exist in recent days), or to future economic events, or to the general background. The dollar is unlikely to fall because the Fed refuses to raise rates or wind down its quantitative easing program. The Fed is not alone in refusing to do so in the coming months and even years. The world economy is just beginning to recover from a severe crisis, and in many countries of the world it has not even been completed yet. Therefore, blaming the Fed for refusing to tighten monetary policy is at least unreasonable. Rising inflation? This is exactly what the Fed has been trying to achieve for years! This, of course, is a negative moment for the economy, but the corresponding report was released in the middle of last week and the reaction of traders to it then was a drop in the dollar by 40-50 points. Why would traders suddenly recall that report at the beginning of a new week and sell off the American? In general, non-obvious processes are taking place on the market now, so it is best to pay attention to graphical analysis.
GBP/USD – 4H. 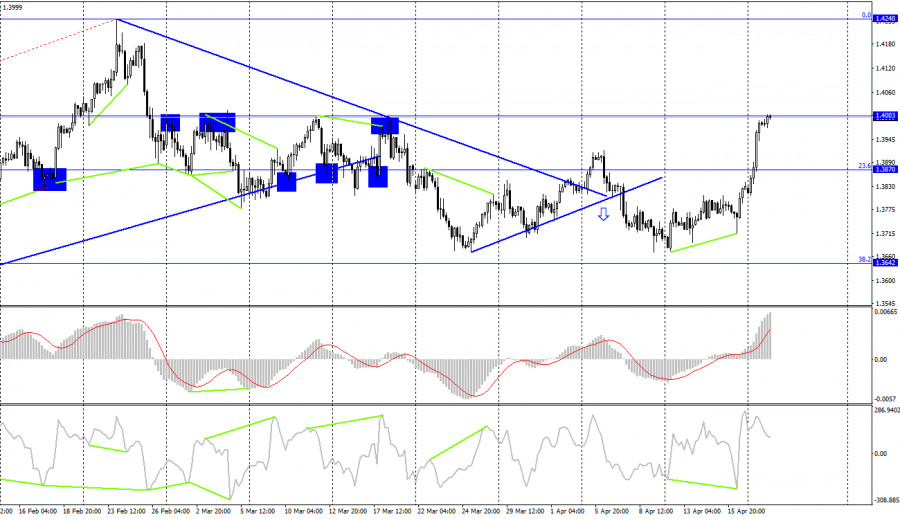 On the 4-hour chart, the GBP / USD pair completed the rally towards the 1.4003 level. A rebound from this level will allow traders to expect a reversal in favor of the US currency and a slight drop in the direction of the correctional level of 23.6% – 1.3870. Fixing the pair rate above 1.4003 will work in favor of continued growth in the direction of the next Fibo level of 0.0% – 1.4240.
GBP/USD – Daily. 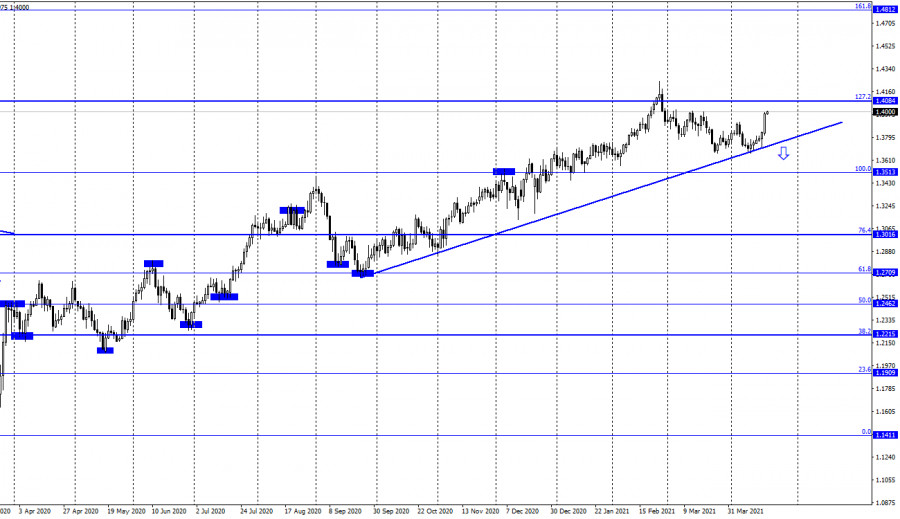 On the daily chart, the quotes of the pair resumed the growth process in the direction of the correction level 127.2% – 1.4084, and the uptrend line received a new point, through which it now passes. The new closing of quotations under the trend line will allow counting on a strong drop in the British quotes.
GBP/USD – Weekly. 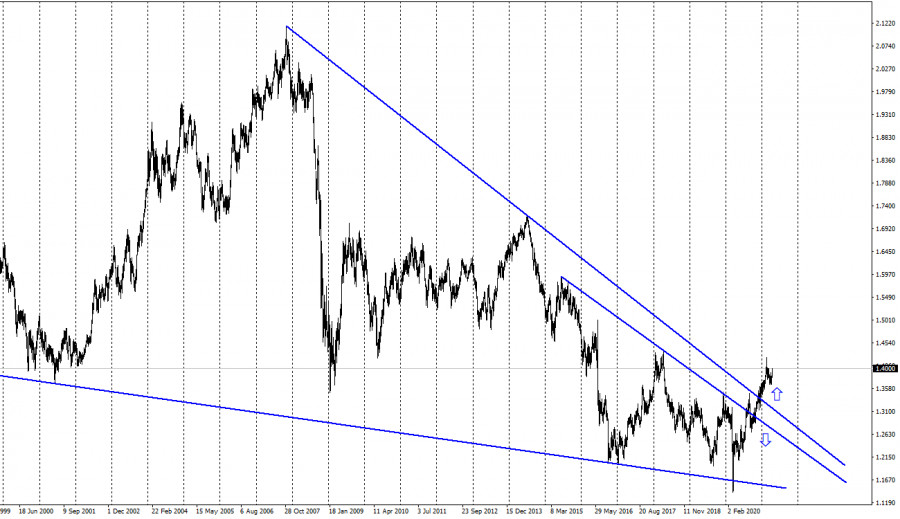 On the weekly chart, the pound-dollar pair closed above the second downtrend line. Thus, the chances of a long-term growth of the pound sterling remain.
News overview:
Economic news calendars were again blank in the UK and US on Monday.
News calendar for USA and UK:
United Kingdom – Change in the number of claims for unemployment benefits (06-00 UTC).
UK – Unemployment Rate (06-00 UTC).
UK – Change in average earnings (06-00 UTC).
Several rather important reports are due out in the UK on Tuesday. Thus, from the very morning, the information background will influence the pair. Another question is whether we will notice this influence on the charts, given the strongest growth in quotes?
COT(Commitments of traders): 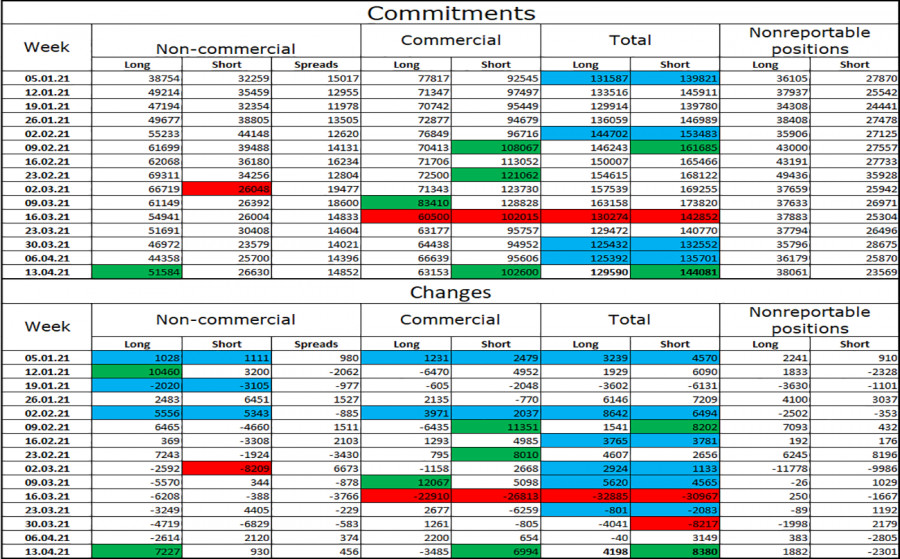 The latest COT report from April 13th UK was very eloquent. The category of traders “Non-commercial” opened as many as 7227 new Long contracts, which is a lot for the pound. Also, speculators opened 930 Short contracts. Thus, the sentiment of the most important category of traders has become sharply more bullish. Now the number of Long contracts in the “Non-commercial” category is again twice the number of Short contracts. This means that, in general, speculators are still bullish, and the pound sterling may continue to grow. Actually, this is exactly what he has been doing in the last days.
Forecast for GBP / USD and recommendations for traders:
I recommend buying the British with a target of 0.0% – 1.4240 if it closes above 1.4003 on the 4-hour chart. I recommend selling the pound sterling if the price rebounds from the level of 1.4003 with the target of 1.3870 on the 4-hour chart.
TERMS:
“Non-commercial” – major market players: banks, hedge funds, investment funds, private, large investors.
“Commercial” – commercial enterprises, firms, banks, corporations, companies that buy currency not to obtain speculative profit, but to ensure current activities or export-import operations.
“Non-reportable positions” – small traders who do not have a significant impact on the price.