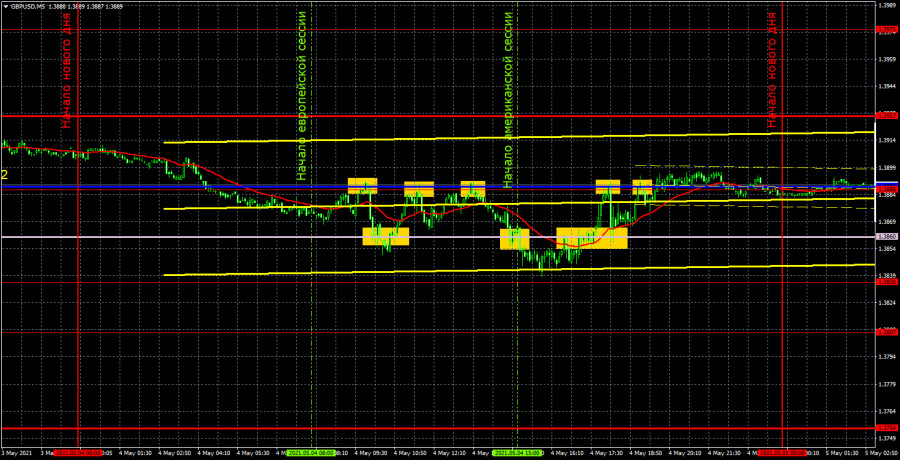 The GBP / USD currency pair on Tuesday, May 4, also stopped trading in a normal way, which immediately caused a whole lot of problems with signal processing. Recall that the last two trading days were almost ideal in terms of signals and movement. But all good things come to an end. The harsh everyday life has come, when you need to earn profit, and not just open one deal in the morning, and “skim the cream off” in the evening. Immediately, we note that during the day not a single important report was published either in the UK or in the USA. Thus, the frequent changes in the direction of the pair’s movement were not provoked by “macroeconomics” or “foundation”. Now let’s try to understand all the signals generated during the day and understand whether it was possible to make money on them. The first signal was formed near the critical line – an ideal bounce and a sell signal. The price dropped to the Senkou Span B line and initially crossed it, so short positions should have been left open, but after 15 minutes the pair consolidated above this line, which served as a signal to close the short position and open long positions. The profit on the first trade was no more than 5 points. During the processing of the buy signal, the price returned to the Kijun-sen line and bounced off it for the second time, allowing to open new shorts and fix profit by longs in the amount of 8 more points. After the formation of the second sell signal, the price could not immediately work out the nearest target and once again returned to the Kijun-sen line, from which it bounced once more. Thus, it was necessary to continue to be short here. Further downward movement nevertheless began, and the price again crossed the Senkou Span B line, but, unfortunately, could not work out the next extremum level of 1.3835. Thus, the short position had to be closed after the price consolidated above the Senkou Span B line at a profit of about 10 points. A close above Senkou Span B is a new buy signal. The fourth and fifth bounces from the Kijun-sen line are sell signals. We will not describe the identical movements of the pair between these lines. On these signals in the flat, it was possible to earn another maximum of 10-12 points. Thus, just like in the euro, traders could earn 30 pips on Tuesday, which is an excellent result for an absolutely flat day. 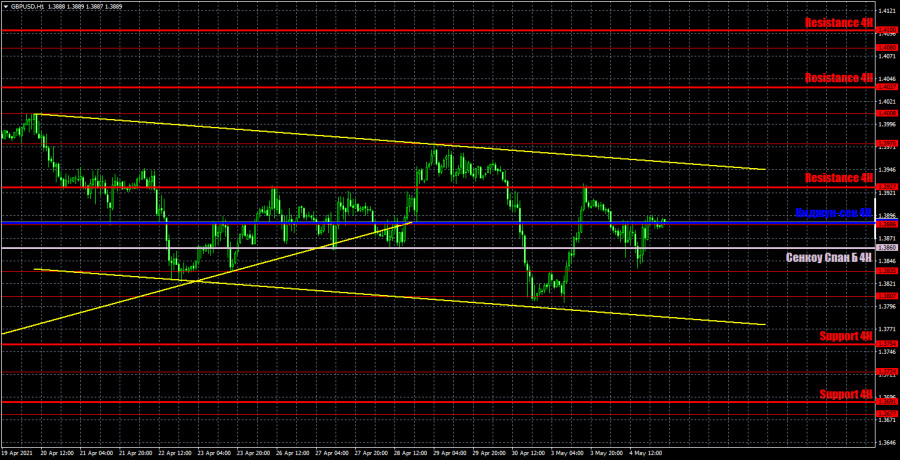 A descending channel was formed on the hourly timeframe, however, it is more for a formality, since its slope is minimal and, thus, it is practically sideways. Therefore, he does not add understanding about what is happening now for the pound / dollar pair. In general, the “swing” mode is preserved, and practically on all timeframes. We believe that this week the pair can calmly resume its movement down another 200 points within the “swing” from the 4-hour timeframe. Thus, we continue to pay attention to the most important levels and lines: 1.3807, 1.3835, 1.3886 and 1.3975, as well as the Kijun-sen (1.3887), Senkou Span B (1.3860) lines. It is recommended to set the Stop Loss level at breakeven when the price passes 20 points in the right direction. The closest level / line should always be used as targets (exceptions – if the target is too close to the signal). No major events are scheduled for Wednesday May 5th in the UK, while the US will release the ADP Private Sector Worker Change Report and the ISM Service Sector PMI. However, this does not really matter for the pair now, since its movements are practically unpredictable in any case. 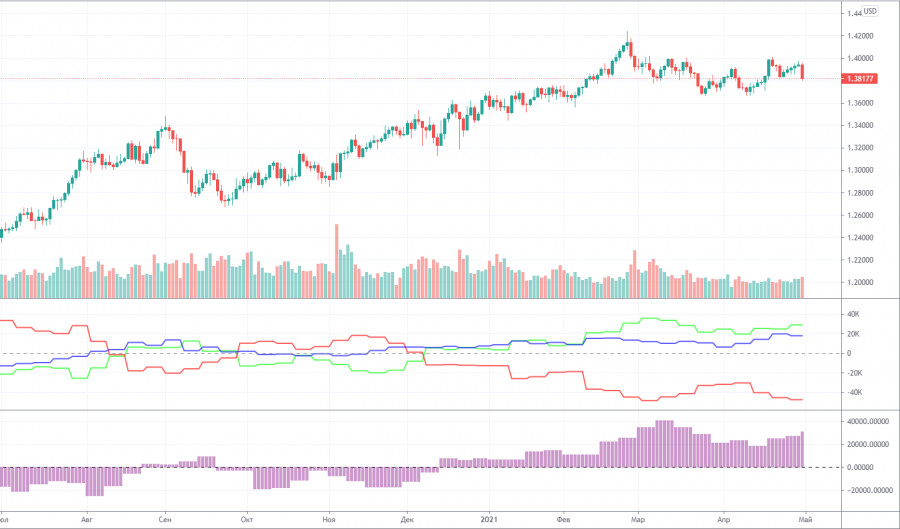 Recall that during the last reporting week (April 20 – 26), the GBP / USD pair fell by 90 points. The last few COT reports have shown that the mood among professional players is again becoming more bullish, but in general they themselves do not know what to do with the pound sterling in the past year. Look at the first indicator in the illustration below the chart. The green line is the net position of the “Non-commercial” group of traders. It constantly changes the direction of movement, intersects with the red line (net position of the “Commercial” group). In general, it is now impossible to predict the further movement of the pair based on COT reports. From October to March, the pound sterling rose in value against the dollar, although the green and red lines at that time showed no trend. During the reporting week, major players closed 1.1 thousand buy contracts and got rid of 5 thousand sell contracts. Thus, their net position increased by 3.9 thousand contracts, and the mood again became more “bullish”. In general, it also remains “bullish”, since the total number of buy contracts from professional players exceeds the total number of sell contracts by 2 times. Thus, of course, we can expect further growth in quotations of the British pound, but we still believe that the swing will continue at this time. Too many conflicting factors are at the disposal of the markets. Constant changes in the direction of movement of the green line indicate that large players in the long term do not themselves know what to do with the pound sterling.